Showing posts from December, 2009
Show all

Hi there. I'm back. I guess I needed a little time away, but then we all need a chance to catch our breath now and then, don't we? Stepping back and looking at this blog (and wishing there was a better word for it... ) I decided it's time to give it a new slant. A new year is the perfect time to make changes, and believe me when I tell you I'm already in the process of making lots of them. Rick and I are more or less settled in Ashland for the time being, but the journey continues on a more internal level than ever. I don't know if we'll ever be "home", at least not until we leave this world and go back to where we all started. But until then, there's a lot to be done, and what I'm learning from this wild ride we've strapped ourselves into is that it's all about creativity. I'm not only talking about the stuff we make, but also the way we live our lives. Every day presents us with choices and options, and living creatively means
Post a Comment
Read more

- December 17, 2009
I'm back, but just for a minute. I was up at 5AM this morning, and thought I'd google "collage art". In the process, I stumbled across a snippet of this poem... Write it on your heart that every day is the best day in the year. He is rich who owns the day, and no one owns the day who allows it to be invaded with fret and anxiety. Finish every day and be done with it. You have done what you could. Some blunders and absurdities, no doubt crept in. Forget them as soon as you can, tomorrow is a new day; begin it well and serenely, with too high a spirit to be cumbered with your old nonsense. This new day is too dear, with its hopes and invitations, to waste a moment on the yesterdays. ~ralph waldo emerson~ Searching for the entire poem, I then found this website: World Prayers , which I find to be just absolutely lovely, and I want to share it with you. Enjoy! Carry on!
1 comment
Read more

- December 14, 2009
I guess I need to take a break. I just don't seem to be finding the time for blogging, and when I do, I don't know what to say. My apologies to those of you who count on a little something from me each day. I just don't have it right now. So I'm going to take this one bit of pressure off my shoulders, rest up a little, and plan to come back after the Holidays, fresh and bubbly and full of good news. Till then, Happy Holidays to you all! xo Kim
4 comments
Read more

i rest my case

- December 05, 2009
So Rick and I went out gallery hopping for First Friday last night, and because it was cold, cold, cold , and we were feeling festive he wore his Santa hat. Later, we met up with Ron and went to the Elks Lodge for beverages. The Elks bar is a No Hat Zone, a rule that's well known and strictly enforced. We're not members though, so Rick sat blithely down on a swiveled bar stool and ordered a beer, without even considering removing his fluffy red and white hat. Normally, the bartender would have politely asked him to remove his headwear, but nobody said a peep, at least not until Rick left to find the men's room. As soon as he was out of ear shot, a buzz went through the bar. "He's wearing a hat! Should we tell him to take it off? I don't know... it's a Santa hat. That's different . I think it might be OK..." When Rick came back to the bar, they all hushed up, and the hat remained on Rick's head. I think this was a first in the bar's long h
1 comment
Read more

Is it just me, or has anyone else noticed the eerie similarities between Santa Claus and God? I've been thinking about this for some time now, and I'm really beginning to wonder - Is Santa Claus God, or is God Santa? I mean really... Let's start with the beard. They both have one by most accounts. The red suit baffles me a little bit, but it did start out as more of a robe-like garment back in the day. Both Guys are, well, guys . Both see all, know all. Both have magical, miraculous talents. Both reward good behavior and punish naughtiness. Both live at the most extreme Up There address available. Both are very creative and really quite handy and prolific with their work. They both have helpers - Santa's elves and God's angels, and all of the helpers love to sing. And even though we never really get to see them, we're expected to, and want to, with all our hearts, believe in them. I'm not looking for trouble or controversy. Really! Religious finger wagger
6 comments
Read more 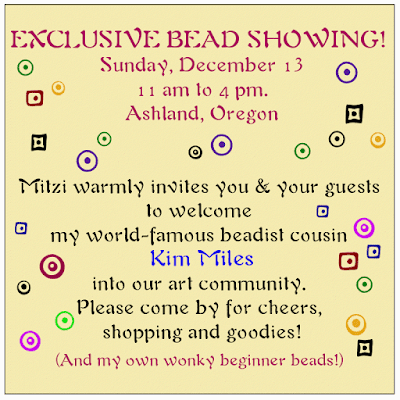 If you live in the area, or feel like taking a field trip to Ashland, let me know and I'll send you the address. It would be fun to see you all here!
3 comments
Read more 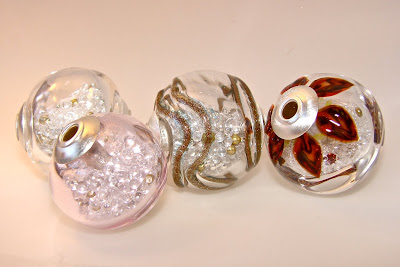 I'm in such a tizzy today! Time away from home really messes with my work schedule, and I have such a mean boss! But I want to show you these new beads. What are they? Snow Balls? Snow Globes? Something like that! They're filled with all sorts of sparkly delights. I must remember to keep one for myself. Probably a pink one, because they remind me of Mom's pink Christmas Tree. It was glorious...
4 comments
Read more
More posts