Showing posts from January, 2010
Show all

Steampunk and Alexander Calder... huh ? I know - an odd combo, but miraculously, lovingly placed before me in a most appetizing way this week. I had no idea what "steampunk" was when my friend Jean Yates told me she had a necklace in the book, " Steampunk Style Jewelry: Victorian, Fantasy, and Mechanical Necklaces, Bracelets, and Earrings", by Jean Campbell , so I googled over to Wikipedia and found this: "Steampunk is a sub-genre of science fiction and speculative fiction, frequently featuring elements of fantasy, that came into prominence in the 1980s and early 1990s. The term denotes works set in an era or world where steam power is still widely used—usually the 19th century, and often Victorian era England—but with prominent elements of either science fiction or fantasy, such as fictional technological inventions like those found in the works of H. G. Wells and Jules Verne, or real technological developments like the computer occurring at an earlier date
5 comments
Read more 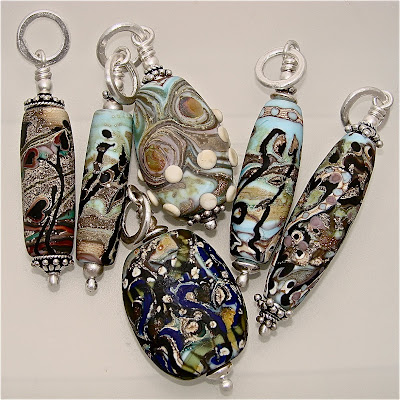 I read somewhere once, "if you want things change, go outside and move a rock". It's true. At least I believe it's true. If you change one thing, you change everything. It's the Butterfly Effect, where the ripple of a wing affects everything around it, and on, and on, and on... I did not see these beads coming. All I did was move to a lake, and set up a tent. I changed something, and in the process, everything changed. I've never made anything like these before, and I didn't plan to make them when I sat down at the torch the other day. All I knew was it was time to get back to work, and so I sat down to play. I'm not responsible for the results. All I need to do is show up. There's a lot of comfort in letting go of control. The little changes require our participation. We're the ones with the hands. After we do our rock-kicking ceremonies, all we have to do is get out of the way and see what surfaces. If it can happen with beads, just imagi
3 comments
Read more 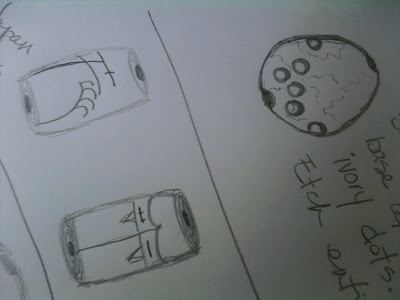 The wind last night was the worst yet. Somehow I managed to just check out, and slept through it until after eight this morning. A good sleep does wonders. When I woke up, the wind had stopped, the sun was shining, and I had bead ideas in my head for the first time in months. A friend suggested that I start drawing. Draw anything, she said. So I drew the beads I saw in my head. It's a good thing I make beads better than I draw them. At least the sketches help me remember those early morning wake-up thoughts. Those are the inspirations that are so easily lost, so fragile they can wander off with the steam from my tea cup, lost in the mist... poof... gone forever. A habit I haven't very successfully developed is to always keep a notebook handy. Always. I'm practicing. Always practicing. Ready to get back to work, Rick helped me set up the new EZ UP so we can get the studio together. I love how it sits there on its little hillside, with a sweeping view out the front to the
1 comment
Read more 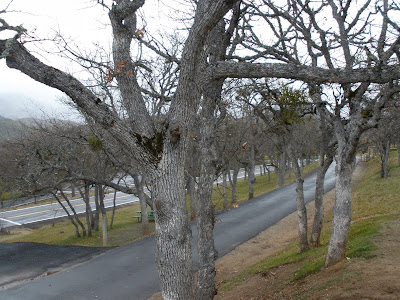 The wind tramples through here like a freight train. I hear it off in the distance, down in the canyon, and listen tensely as it rolls closer and closer, louder and louder, and then blasts the side of the trailer, startling the dogs and tossing us like a boat at sea. Moments later I hear it move off into the distance, up the hill above us, dragging along stray leaves and occasionally knocking down a dead tree branch. Could these be the Winds Of Change I've heard so much about? Unseen and undeniable, impossible to ignore, demanding full attention and awareness. Stay awake! , says the wind no matter if it's day or night. Wake up. Listen. Let go. Watch what blows away, and what blows in...
2 comments
Read more 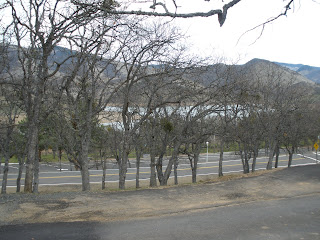 Notice anything different? I just found this most marvelous new "skin" for my blog. It was hard to choose from all the beauties offered to me, so I might decide to switch it up fairly often. After all... change is the only thing we can really count on. Might as well make the most of it. We've moved ourselves up to Emigrant Lake. I adore it here so far. We've come from the cozy little glen by the stream to what feels like a big wonderful tree house. We're up high on a hillside, looking down to the lake, and up the slope behind us through hundreds of oak trees. We really do live a charmed life. And to think, three weeks ago we nearly took a hideous space in a ghastly park in town, just to be sure we had somewhere to spend the summer. SO glad we decided to trust that something better would find us. We didn't do it. We just waited and trusted, and here we are. The more I live that belief, the more it proves to be true. Constant practice is all it takes, and we
2 comments
Read more

Moving through this odd vacuum I seem to be stuck in, I realize that if I stop struggling, there is no more struggle... Now I'm just floating, keeping my head above water, waiting to be guided to shore. I know that nature doesn't do vacuums. The void will be filled, and it's not up to me to fill it. Interestingly, and I'm sure not merely coincidentally, I have lost my voice. Unable to speak, I can only shut up and listen. Hmmm... A new gig of sorts has presented itself, and we've accepted. Rick and I are to be volunteer "camp hosts" at Emigrant Lake this summer. And in this case, "summer" starts early. We're pulling up stakes tomorrow morning, and rolling the old gypsy wagon across the highway, about a five minute trip, to our new "home". The park doesn't open to campers until March or April - I'm not clear on that yet - but we get to be up there, helping ready the place for the summer crowds. Rick and I will be on the te
3 comments
Read more 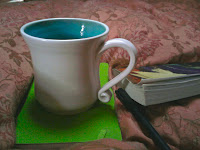 If you've been riding along with me here for a while, you know I can get more than a little discouraged sometimes. We all do... don't we? I see it all around me, and it's usually my job to say something comforting and encouraging. Cheer up, Ducky; everything's gonna be fine . And I believe it when I say it to somebody else, but when I'm the one bumped into the corner, banging my head on the wall, unable to find even a little window, let alone a door... well, then it's not so simple. My dilemma at the moment is I just don't know what to do . I've had doubts about the reliability of beads as little income producers for a long time, but now I'm even beginning to doubt my own instincts. This is not good. This week, for the first time in years, I have not sold one single bead. Not one. I'm baffled. Have I been fired from my job? Isn't someone supposed to tell me? Don't I at least get to put all my stuff in a box and wander out to the street,
5 comments
Read more 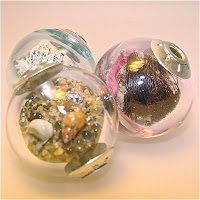 I knew this studio limbo I've been in would pay off in some way. I can never predict how or when, and I think patience is one of my big lessons in life. I'm getting better, little by little, but some days my battle cry is still ,"Patience Now!". These last few weeks have been a nice change of pace, with a rattled schedule, infrequent studio time, and some nice hits of travel. I've had an idea brewing on a back burner for weeks and weeks, and it's finally emerging in a somewhat complete form. I spent all day yesterday working on samples for this new "product", obsessed to the point where I didn't notice until well after dinner that I hadn't been outside all day . I looked out the window and let Rick take the dogs out. I was not going to be distracted. This New Thing is a bit of a leap for me. Yes, it's still a bead, and it's not even something I haven't made before. What's different is I feel drawn to allowing other people in
1 comment
Read more

all i want is a room somewhere

I've been putting off work for a couple of weeks. It's pretty convenient to blame it on the holidays, but the truth is, I'm just kind of stuck right now. Forced creativity, for me anyway, just turns into a big pile of poo . (I know there are at least a couple of kids who read this, so I hesitate to use some of my favorite words, like shit , for instance. Please feel free to insert such words wherever you think I might use them, because you're probably right.) Forced creativity does little more than create constipation, sometimes literally, so the best thing I know to do is forget about making stuff for a while. There are plenty of other long-neglected things just waiting to be done. I have three big projects in mind this week. Maybe four or five. I'll feel good if I get even one of them done. First, I have beads to post in my BeadShop, which would be a good idea, since the beads are still our only source of income. I also have a new "product" in the work
6 comments
Read more
More posts