I'm in my outdoor office this week, at the picnic table on the patio. I have a favorite vintage tablecloth, lilacs in a martini shaker, and tea in my new favorite cup, made by Charan Sachar. I'm considering a new format for my blog, which I'll try here today. I suspect that only three people actually read this, and yet I persist. I like to write, so that can be good enough. I have lots of things to talk about, so I'm going to try dividing my time here between Life Stories and Ponderings, and of course, Knitting. Feel free to tell me what you think, or even just grunt if you're out there. Really, have no idea.

I like meeting new people. But I hate the inevitable moment when New Person will politely raise their eyebrows and ask me, "And what do you do?" It's sort of like the human equivalent of dogs sniffing each others' butts. We need to size each other up somehow, right? What better way than to sniff out what a person does for money.

Ever notice how when someone replies with, "I'm retired," the conversation either stops right there, or if it keeps going, the next question is, "Oh, what did you do then?" Nobody asks how you spend your time now, or what do you do for fun, or what makes your heart sing. It's all about the money. Can we change that, please? I have a very hard time answering the what-do-you-do question...

It happened to me yesterday. My response, as it almost always is these days, was a stumbling, "I don't really know..." What a dumb answer. I was sitting there with knitting in my hands, so I could have started with that. I don't know why that didn't seem a worthy response.

Fortunately, I was with a small group of friends who know me pretty well, and one popped in to rescue me by saying, "You run an Airbnb!" Oh that... well, yes I do. I even have a modest income and business cards to prove it. Why don't I think of that as real and worth telling someone I'm meeting for the first time? (And why did it take until the third re-write of this post to think of adding a link to Mermaid's Nest???)

I'm home alone this morning, which is always lovely, because our house is small, and a girl needs a little space now and then. I've been sitting here thinking about how I really want to answer my most dreaded question. And I realize it's actually so very simple. I make things. I've always made things. Making things makes my heart sing. And making things is a valid Thing To Do.

So my elevator speech - my response to What do you do? - is shorter than a ride from the first floor to the second. I'm an innkeeper, and I make things. It's so simple I think it doesn't count, but it does. It's so humble, and so not-that-financially-lucrative, I think nobody's interested. But if they are, there's plenty to fill in from there.

I'm ready for you, New Person. I know what I do.

This Week On The Sticks... 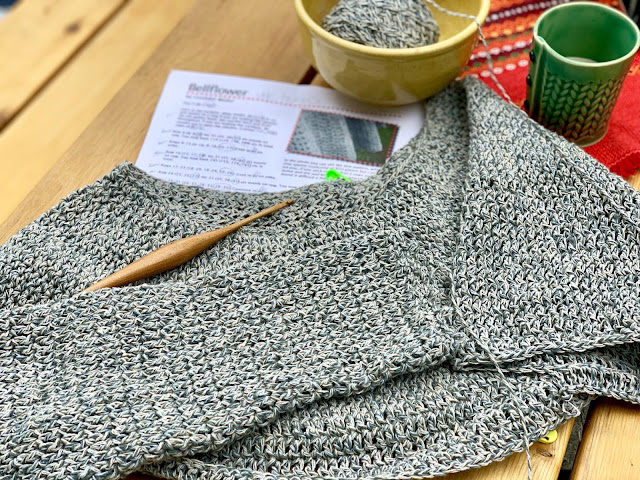 I'm taking a second (actually third) try at a crocheted sweater I'd really like to make, but am really struggling with. It's a cute, summery (on the Oregon Coast, anyway) pullover pattern called Bellflower, by Liselotte Weller, on Ravelry.

It's a free pattern, so there isn't much support to go along with it. That shouldn't be a big deal... for someone who's paying attention, like I wasn't at first. Sigh...

I zoomed along, watching the yoke of my sweater go from normal looking to long, to longer, to is this a skirt??? -  but I kept going, thinking it was some sort of interesting design element that didn't show up in the pictures. When I added a sleeve and tried it on again, I had something like a squeezy little cropped cape with a sleeve starting at the elbow. If I'd kept going, I could have turned it into a straight jacket. I had clearly done something quite wrong.

I went back to Ravelry to see what others were saying about this pattern, and quickly realized that I was crocheting in the wrong language. It's noted on the Ravelry page that this pattern is written in UK terms, but I overlooked that in my excitement. That rather important bit of information is nowhere on the printed pattern, so off I went, double crocheting when I should have been single crocheting. Crap! Damn UK terms!

I ripped the whole thing out and started again, translating the stitches to what they were meant to be. But after just a few inches, I still wasn't happy with the look. Another frogging, a little head scratching, and a self-pep-talk later, I took the pattern line by line, and changed almost everything, keeping only the suggested numbers of stitches as guideposts. Now I like it a lot.

I have the yoke and one sleeve finished, and just enough yarn for the second sleeve before changing colors for the lower part of the body. I'm using stash yarn that may or may not be quite enough, and I'm creatively combining two different shades of the same yarn. It's Berocco Indigo, recycled denim and cotton. I like the fabric it's making, and I sure hope I have enough, because they don't make it anymore...

More on this when it's finished. Fingers crossed.

Have a good week!