- April 26, 2009
I haven't been sleeping well lately... well, for about the last three years. But recently I think it's mostly about all this motion we've set ourselves in, and all the little details that need to be taken care of before we can be on our way. Simplicity isn't all that simple sometimes.

I've been thinking a lot about how I want to decorate our trailer. The stuff it came with just doesn't suit us. (Scroll down a couple of posts for some "before" pictures.) Personal taste is a funny thing. I know a lot of people think the current interior situation is just fine. But we're thinking more "Gypsy Wagon" than "Grandma's Parlor", if you know what I mean. And I've been really stumped as to how to do that without making it too "Stevie Nicks" or, even worse, "Circus Freak". After all, we're going to live in this thing for a while. The only real start I have is some cool red glass rose knobs that I've been saving for a couple of years. I really want to use them in the trailer, if we can disguise the extra holes we'll have to fill when we take down the two-screw pulls that are there now. Other than that, I've just been losing sleep trying to figure out what else to do. 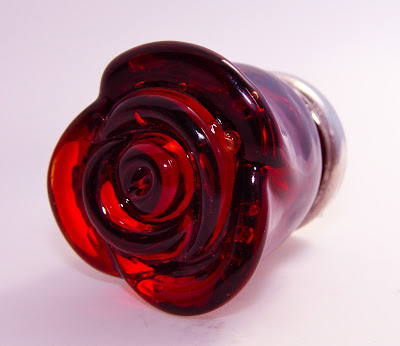 I woke up this morning with the thought of putting up a small backsplash of tiny one-inch mosaic tiles on the wall behind the sink and stove. Maybe olive green, or red, or turquoise. It seemed cool, but weird too. Where did those colors come from anyway? I shuffled into the kitchen to make tea, and BOOM, there it was, the Spaghetti Tin, gleaming in the sun like a beacon of interior design. I've had the Spaghetti Tin for years, but I didn't recognize it for what it was until just this morning. Now I've got it. Here is my color scheme! 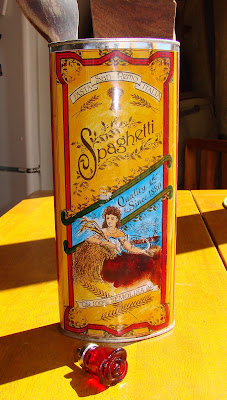 About now you might be thinking I've been breathing too many propane fumes. But trust me on this. I think I can make it work. I don't have anything else to show you yet, but Rick is on his way to buy paint, and I'm hot on the trail of bargain slipcovers and drapes. I'll keep you posted on the progress. I think it's going to be ever so fabulous. Maybe simplicity is simple after all. You just have to be patient and let it flow. And maybe, just maybe, I'll get a good night's sleep tonight...