- May 13, 2009
The trailer re-do is well under way. Rick is at it pretty much full time now, while I make beads and keep the cash flowing. He's doing a great job. So am I, for that matter.

Rick thinks he'll be finished painting today. Then there are no more excuses - I have to make the curtains. Well actually... Mom's sewing machine is in the shop, so I can't use it yet. But I do have an ancient black iron singer in a rounded wooden carrying case. It's beautiful, and can sew through plywood... I'll get it out today and see if it still works, and if I can remember how to thread it and wind the weird oblong bobbins... I guess I can come up with excuses not to sew, but that won't get the darn curtains in the windows, now will it?

Here are some pictures of the progress so far... 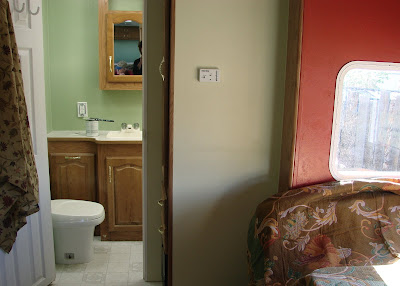 The main area is sort of a celery green, the bathroom, bedroom, and "bunkhouse" (behind the bathroom door) are the deeper sage green, and the slide-out, which contains the dinette and sofa, is red. Really red, like a gypsy fire. It's kind of bright in the day time, but super warm and cozy at night, which is the only time we want to be indoors anyway. It's the third red room I've had in my life, so it's not a question of "can I live with it". I love red walls, so Rick does too now. The splash of fabric on the left will be curtains all around, and the one on the right will be the upholstery for the dinette. We decided to keep its configuration, rather than replace it with a regular table and chairs, because we need the storage underneath. Besides, when we go to a restaurant, we ask for a booth. Now we have one of our very own. 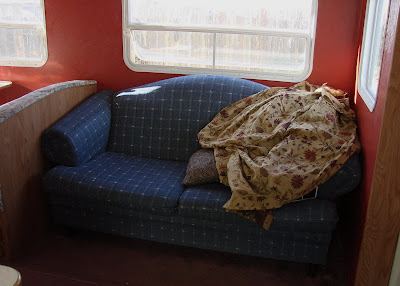 Rather than re-cover the ugly, uncomfortable, and heavy sofa bed, we took it out, set it in the driveway for a future yard sale, and slid in this favorite loveseat from the house. It will get a nice chocolate brown faux-suede slip cover. Here's another look at the curtain fabric that we found at Cost Plus. Love it! And you can't see it, but Rick switched out the icky, glary, clear overhead dome lights with lovely, softly glowing bronze ones from Lowe's.

I had planned to show a couple more pictures, but I just this minute ran out of photo storage on Blogger. Sheesh! I bought more, but it won't kick in till sometime tomorrow. So I'll show you some more later. Ah well... It's funny, because just last night I went over to Greetings From Taos, to see if the archives still go back to day one. They sure do, and I've posted a lot of pictures since September 7, 2006!

I want to thank you all for telling us about your favorite music! You still have a couple of days to enter the Bead Give-Away. Scroll down to the "what's in your ear" post, and chime in! Someone suggested a "Balkan Beat Box" station on Pandora. Oh yeah, baby! This is just what I need! And speaking of boxes... I'm almost finished adorning my Magic Gypsy Bead Chest. You'll see it soon!