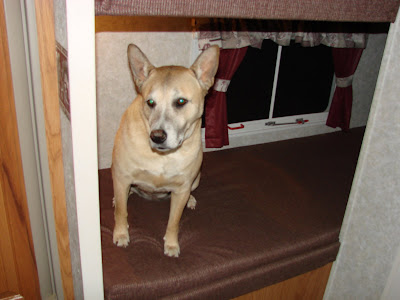 Lucy is a skittery dog. She's afraid of things like thunder and fireworks. She hides under the table and whimpers when things go boom. She's also a suspicious girl, and generally doesn't like anyone but us. She's OK with most women, but is snappish with kids and men. She particularly dislikes small boys. We don't know why. Could have been something that happened at the shelter, but we'll never know. I'm always nervous about her when friends come over, afraid someone will reach out to pet her and get bitten. Rick has always said there's no way she'd actually bite someone. I've never been too sure about that.

Of course we want to take the dogs along on our gypsy adventure. They're part of the family, as anyone who has pets knows. Heidi is easy. She's compact and friendly and no trouble at all, except for cutting her nails, which she absolutely won't let us do. I guess being a sorority girl, she prefers a professional pedicure. Lucy, on the other hand (or paw), hates nail cutting time, but tolerates it if there's enough tummy rubbing and treats. We have a little game we play, called "Lemme See Your Foot". She puts her foot up as if to shake hands, and I wiggle her toes, saying "want me to cut your toenails?" She makes a cute snarly-face, everybody laughs, and that's it. Game over.

The other night, Lucy was up on the bed with me for her bedtime snuggles. We were having a nice, calm chat, when I said , "lemme see your foot" and reached for her paw. I guess she didn't want to play, because she bit me. Hard. I was so stunned I just hollered OUCH!, and sat there for a minute before sending her off to her own bed. She didn't break the skin, but she chomped me pretty hard. You can't see it on the surface two days later, but it still feels like it's bruised deep inside my hand.

This just sucks on so many levels. Once a dog bites, the trust is gone. And here we are, planning to take her on this trip, where we'll be with a lot of people a lot of the time. We know we've been remiss about socializing her. She's always been a House Dog, with lots of room to run in the yard. We can walk her on a leash pretty well, but she's as strong as a rhino and hard to control if other dogs are around. Every so often we vow to take her out for a walk in the neighborhood every day, but there are so many loose dogs here, it's super stressful for all concerned. A collar doesn't work. Neither does a harness. She struggles so much with a halti that she gets nose bleeds. A prong collar is the only thing that works, and it seems so mean... It's a good plan, but it never lasts long. Now I'm wondering how we're going to make this whole thing work. If we could give her to someone who understands dogs and has room for her to run around and be happy, we'd to that. But it's more likely that we'll get her a muzzle, and try not to make it too negative for her. We can't trust her with people on the street. Can't take the risk. But we also don't want to give up on her. We love her, but clearly we haven't done some things right.

Poor Lucy is so contrite, as if she knows what's at stake. She looks up at me with sincere "I'm sorry" eyes, and lays her head in my lap whenever she gets near me. I think she really is sorry, but I still can't trust her with other people. At least not yet. This is really hard...

I know when I write something like this, I'm bound to get a lot of advice. So I might as well ask for it. All you dog people, please feel free to chime in. I can use some help, but would rather not be scolded for being a lousy dog owner if you can help it...