- June 18, 2009
A few weeks ago, when we were just starting on the Trailer Remodel Project, Rick asked if he could please, please, please put off doing the floor until we got to Seattle in September. It was a huge and daunting job, and he wanted to wait till he had some help. I said, Sure, honey, but I didn't really mean it... As I'm learning though, with so many things these days, letting go can be the best way of getting what we want. With the weight of having to do the job off his shoulders, Rick started to think of ways he could do it all by himself, while we're still here. He's good at figuring things out, and even better if I don't pressure him. It wasn't like he was being stubborn, or didn't want to do it. He just needed the room to do it his own way, in his own time. I just stood back and said, Anything you want, and in the process, I got what I wanted too.

Yesterday was the big day. He got out to the driveway early, before the wind kicked up, and spread out the new roll of imported (from Lowe's in Espanola) vinyl. Using the old floor as a pattern, he was able to cut exactly what he needed and lay it in place without much trouble at all. The only little hiccup was discovering that the toilet was not attached to the floor properly, but that was a good thing, because he was able to fix it before we got out there on the road somewhere. A broken toilet is never fun.

So here are the pictures. First, the naked floor, which I think already looks better than the white stuff that was in there... 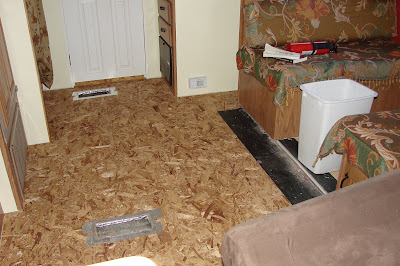 Here's the new vinyl, and my ever-so-amazing sweetie-pie... 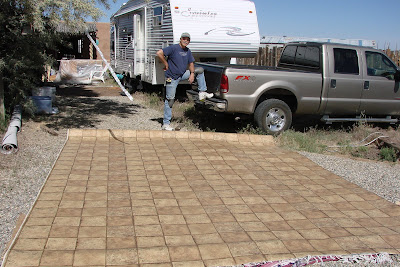 And the old vinyl, used as a pattern. Brilliant! 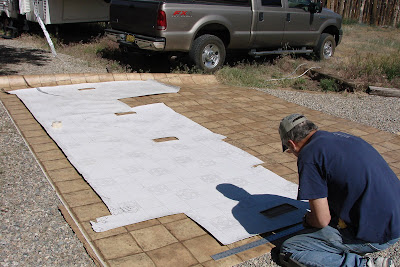 This is how it looks now, almost finished, except for the little trim pieces around the edges. 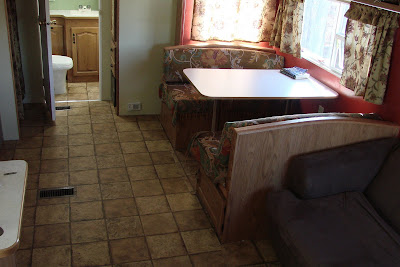 It's beautiful. This last piece makes all the difference. It ties it all together and makes it all look intentional. I love it, and Rick loves it too. The only thing left now is the bed. Once that's done, we'll move all our stuff in, and take another round of "after" pictures. We're just about to that tipping point, where the trailer is more "home" than the house is. Soon we'll just naturally move ourselves out there too, and that will be that.