- July 13, 2009
I just took a couple of days to test the new traveling studio. With a few minor adjustments, it's working pretty well, and I'm pleased as punch with the first beads to come out of it. The Canyon influence is clear in many of them, and interestingly (to me anyway), is a fairly frequent "ocean reference". At first I thought, where the heck did that come from? And then I remembered - this part of the planet was once an ocean. Fossils of sea creatures are still found in the rocks here. Amazing. So it makes sense that I'm getting an "ocean vibe". It's also in my radar that we're headed for Monterey, CA at the end of the month. Deep currents often surface in beads... 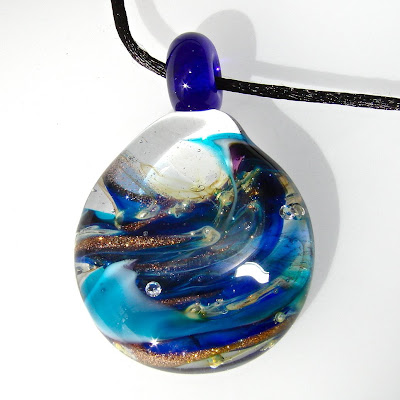 For those of you who are interested in the workings of a mobile studio, here are some pictures. There will be a few more little changes, but this is basically how it works. It's bare-bones and super simple. Low-tech even. But it works, and trust me, safety is very important to me. 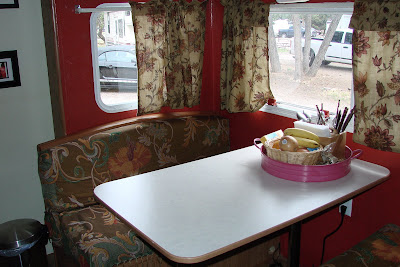 This is the "dinette" area of the trailer, which we magically transform into a bead studio. 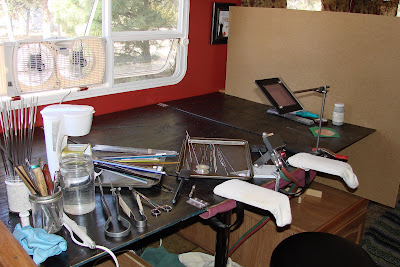 The cushions are removed from the seats, and a hinged plywood table top fills the entire table/seating space. It's painted with black fire-resistant woodstove paint. A piece of masonite creates a wall between the work area and the couch. I also take the curtains down from the windows. 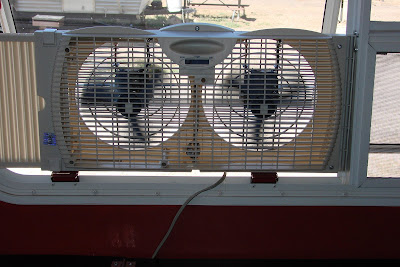 My ventilation system is a double fan that blows out the window, combined with the open door and windows behind me. 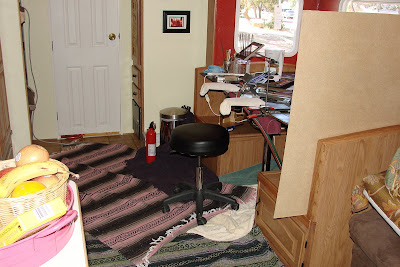 The floor is covered with blankets, in case of accidental "popping" glass. I don't want to burn holes in the new vinyl! 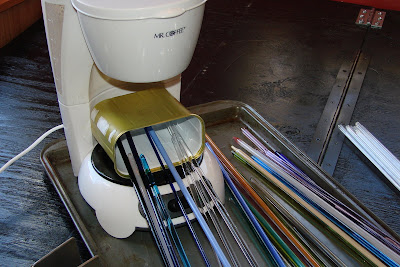 This is the "popper stopper", or rod warmer - our mini coffee maker and a Spam can. The dogs were very happy that I needed a flat-sided can. As it turns out, I really think I need a round can that fits in the burner. I'll have to cut it down and make a little door for the rods near the bottom. 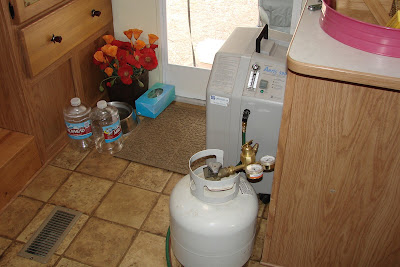 I'm using a minor burner torch, instead of the Lynx I used at home. The minor requires less oxygen, so I only need one oxy concentrator to get a good flame. I set the concentrator and propane (with flashback arrestor, of course) by the door, so the neighbors don't freak out seeing all this strange equipment and hoses. I also don't want ravens, dogs, and wandering kids messing with my stuff. 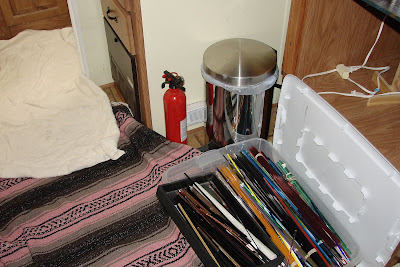 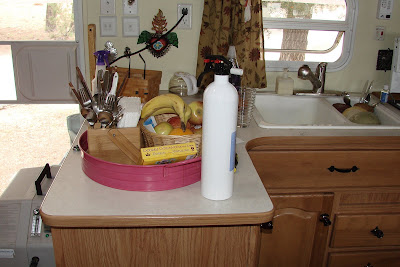 My box of glass sits on the floor next to me, and there are two fire extinguishers in easy reach, one right by the table, and one by the door. 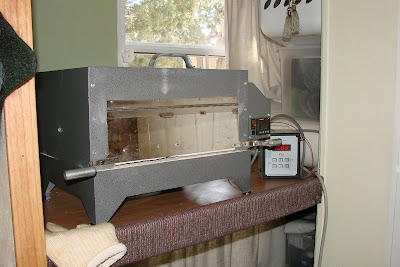 I thought the kiln was going to go in the shower. It fits perfectly there, but I didn't factor in that it takes several hours to cool down after I'm finished working, and skipping bedtime showers is just not an OK option here on these hot desert days. So I moved it to the top bunk, where it's in easy reach from the torch, but stays out of the way as it ramps down over night. I want more insulation under it, which we'll take care of at the next hardware store we pass.

That's about it. I probably won't make beads again until we get to Reno and camp at my sister's house for a few days. I'd like to get into something of a groove, where I make beads one long day each week, then spend the next two or three days doing silver work, photographing, posting, selling, and mailing. I'm out here to have more of a life, and that can't mean working seven long days a week, like I had to to support the Taos House. I'm learning as I go. Bet I figure it out.

Enough work now. Back to play. Here are a couple of new Canyon shots. First time visitors are often astonished at the absence of railings in a lot of places. After a while, you get used to the wide-open heights. It's wonderful to dangle your toes over the edge while watching for wildlife. Amazingly, only 4-5 people "fall in" each year. 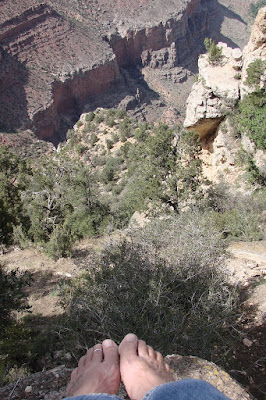 Sometimes the sky is as interesting as the rocks and animals. This was about an hour before sunset. I took dozens of pictures here... Remember, you can click on any of these pictures to make them bigger. Some are worth the wait! 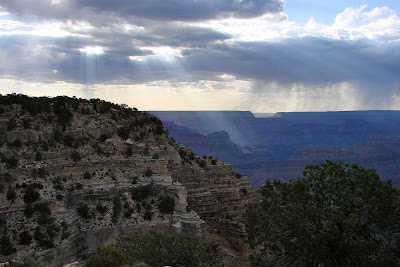