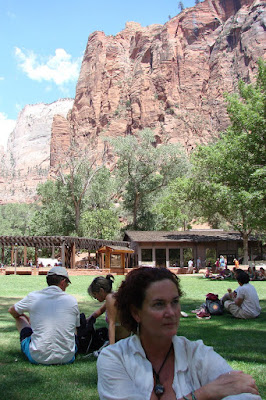 My dad had his 80th birthday yesterday. He's what we call a "young" 80. Still in good health, and still has all his marbles rolling around in his head. He's fun and funny, and just a great guy. My dad is my hero. Always has been. I guess it's that way for most daughters.

I talked to him on the phone, after a day of running around in the heat at Zion. We took the shuttle from town into the park, and hopped off at several spots to take in the towering views, soak our feet in the Virgin River, sip iced coffee, and pick up some rich red dirt to make beads with. The whole time we were out, I kept saying, I have to get back and call my dad. So we decided to call it a day around 4:00. It was too dang hot to be anywhere but in the river anyway. 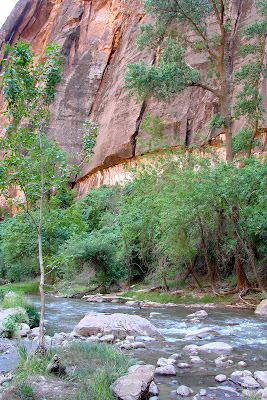 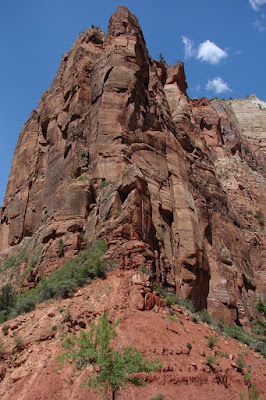 I had a nice long chat with my dad (I still call him Daddy). He told me that he used to think 80 was old, but now it's no big deal. He says it's weird having that big number hanging around his neck. I guess 80, like 52 and 29 and 12, is just another awkward age. Maybe all ages are awkward when we put to much significance into the number.

Later in the evening, Rick and I enjoyed elegant activities like laundry and cleaning dog poop off the rug. I got laundry. There was an "old" guy down there with his head in the ice freezer, trying to find a block, rather than cubes. He refused help with the lifting, but allowed me to hold the door open for him so he could use both hands to wrestle the heavy bag out of the far corner. We chatted for only a moment. He wanted to pay me for the ice. I sent him inside without giving him a hug, although
that's what I really wanted to do. It was such a brief encounter, but he was like a stand-in for my dad. Another manly man, still taking care of business, but willing to let a little bit of help in, even from a girl. I felt about 12 in that moment, in a good way. We'll leave here tomorrow, and head for Reno, to my sister's, and then to Monterey for the big birthday party. I'll get to see my dad then, and give him that hug I've been saving.