We're leaving Grand Canyon several days early, and heading to Zion National Park in the morning. Hard to explain, but it's time to go. Zion wasn't in the "plan" at all, but somehow, now it is. It's another of our favorite places, and it's interesting that the highest part of Grand Canyon is the same elevation as the lowest part of Zion. We'll get some river time there, and will be looking up at the cliffs instead if down. Through the looking glass we go. The geology in these parts is pretty incredible. And speaking of incredible, I learned that the big old junipers that grow here can live 1400 years. Wow. And... this is the best tidbit yet... the most dangerous animals at Grand Canyon are... the squirrels! No fooling. They're so dependent on human handouts that they get really aggressive. They carry rabies and plague, so that makes them much more threatening than rattle snakes and elk, which prefer to stay clear of us. Go figure. 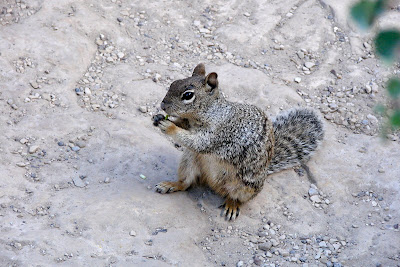 I've gathered some Grand Canyon dirt, and will make more Grand Canyon Postcard Beads later. I'll check in here again once we get settled in Zion.