- June 24, 2010
In my humble opinion, there's nothing better than a day on the coast of just about anywhere. My favorite, because it's home turf (or surf), is the beautiful Pacific. Any part of it, as far as I can tell. Today we're on the southern Oregon coast, in Gold Beach. It's about the closest worthwhile beach town to Ashland, at about a 3 hour drive away, up through Grants Pass and along the Redwood Highway till you hang a right and head up the coast a ways. Except that you no longer see people camping on the beach the way I remember from the 70's, the Oregon coast is still kind of low-key and a little bit hippie-ish. It's easy to be comfortable here. We would have gone over to check out this guy's art work, but we didn't want to scare away his bird... 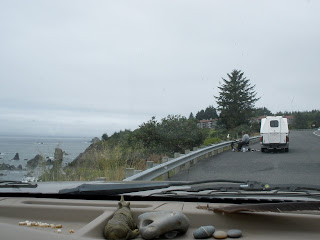 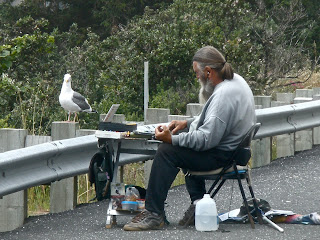 There's a brief stretch where you go through California, which means you also get to stop at the "bug station", where they always ask you if you have any fruit, and you always say no. Except today we said yes for some reason, and confessed to having cherries and organic grapes. Wouldn't you know it - cherries happen to be on the quarantine list right now, and we were told we had to either hand them over, or pull off to the side of the station and eat them, handing over the pits when we were finished. We opted for eating the cherries. It turned out to be a nice rest stop for us and the dogs, and too many cherries later we surrendered the leftovers and asked - just curious - what the heck was wrong with cherries anyway... I should have known better. There are some things we just don't want to know. Like the fact that cherries are the "host" for some sort of icky little fruit fly, and we very likely were eating bug larvae in those beautiful Bings... Trying not to be too grossed out, I quipped, "I guess cherries are no longer a vegetarian food, huh?", and got a pretty good laugh put of the state border officials.

Moving on, we spent a great day along several beaches, thankful that it was foggy to sort of sunny, as we are no longer in those silly years of wearing swimsuits on the sand and roasting our skin under the hot sun. I'm happy to roll up my pants and slosh along the shore with Rick and the dogs. If my seasonal brownness is uneven in any way, that's OK with me. 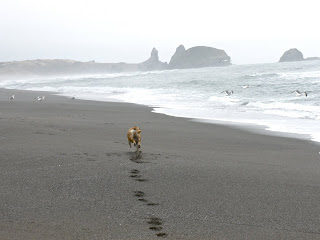 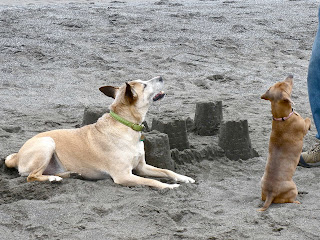 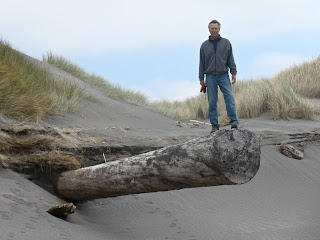 We found this great little place to stay - the Rogue Pacific Motel, which consists of several new cottages (small modular units) that run $85 a night, several "older" rooms, that look to be a bit on the funky side, but are probably worth more than the $35 a night they cost, as they're set up as tiny apartments, with kitchen/bath/bedroom, but no ocean views. There are also quite a few crazy old permanent resident trailers that have settled in for all time. The walk to the beach takes you down through the high school football field, and is literally only about a 5 minute stroll. We opted for the nicer $85 cottage, with bedroom, bathroom, kitchen/living room, and an amazing view of the ocean. This feels like Heaven to me... 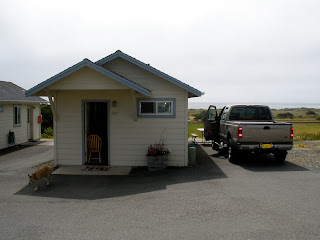 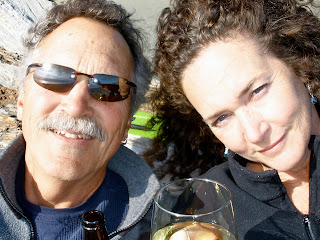 We went to a restaurant on the Rogue River for dinner, but were seated and ignored for over 15 minutes, so we walked out, very pleasantly actually, and went back to town to a pizza place. We ordered our pizza without cheese, which was actually really good, and that amazes me quite a lot. We're learning to be traveling vegans, which is much different than being home cooking vegans. When we can't get whole grains, we make up for it with extra vegetables. and surprisingly to us, out tastes have changed to a point where cheese, which we once glorified as a Holy Entity, is not missed at all. Go figure. We also bought a darling, tiny giclee print, off the wall of the pizza shop, of a painting by a local artist... of cherries. It will always remind of of this day.

And what a day. A very good day. The dogs are exhausted, we're well fed, and the sounds of the waves, and a distant fog horn, are rolling through the open windows of our enormous cottage. Nothing is missing. I think I could live right here very happily. A one night vacation can be every bit as good as a long, expensive excursion. Maybe better in some ways. I think we'll be doing this often. Oh, I hope so... 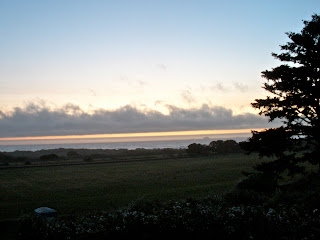