- June 30, 2010
Sound asleep, after midnight. A car pulls up, stops, motor running, doors open, and I hear someone rummaging through the pile of firewood that's directly under our bed, under the fifth wheel overhang of the trailer. I hollered, Hey!, from the window, and two very polite young men told me they "were hoping to get some fire wood, and pay me in the morning". I said, You can pay me now, and instantly felt like an idiot. I should have said, Put the wood down and go to bed, but nooooo, I wanted to be nice... 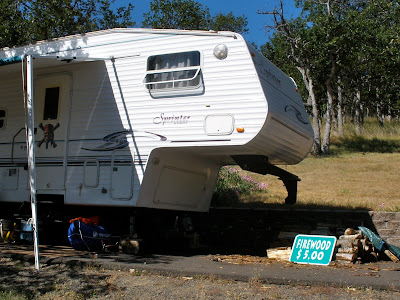 Rick went out and got their money, and then we both lay awake, thinking about how we should have handled those guys, which of course is easier once you're wide awake and angry. The more I thought about it, the more it seemed like the Wood Pirates were just a couple of pampered, smooth talking, privileged kids, who knew how to schmooze their way out of any situation, and were used to getting what they wanted. They even mentioned that they were late because they'd just come from the Shakespeare Festival - like I was going to be impressed by that. Half the people who come here go to Shakespeare. We go to Shakespeare. It doesn't make us superior humans. I was beginning to feel like Camp Mom, and wanted to teach them a lesson, which of course is stupid. I finally fell asleep, planning my blog entry for today, and rummaging deep for some gratitude toward these guys, for at least giving me something to write about.

But, I have to admit to some wicked satisfaction this morning, when Rick told me the "gardeners" in orange jumpsuits were arriving at 8:00... and they would be mowing and weed-whacking... at the very end of the campground the where the Pirates were sleeping off their late night revelry. I'm still smiling, just thinking about the lovely instant karma of it. And I'm also feeling another wave of gratitude for a lesson well taught. We're here as camp hosts to help people, and to try to make their stay a pleasant one, but we're not here to be taken advantage of. This is good information to have, as we go into the 4th of July Weekend. Thanks Boys. But don't let it happen again. I know I won't. Maybe we should leave the porch light on, so future Pirates will know who just they're dealing with... Aaarrrggghhhh! 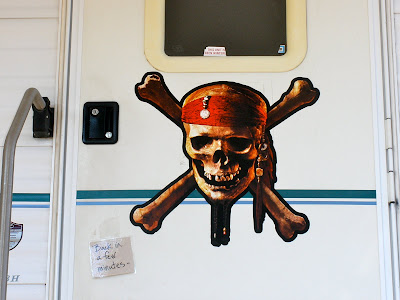