Made It Through The 4th

- July 05, 2010
It's relatively quiet in the park today, after a crazy 4th of July weekend. I guess it was pretty much as we expected - lots of people, a full campground, big groups with kids and boats and jet skis and dogs, noisy campfires, a few over-indulgers, and a couple of Really Bad Ones we all wished would just go away. For the most part, people were well behaved and nice to have in "our" camp. I did have a run-in with one mean, terrible jerk though, that had me hiding out on my trailer for most of Saturday. No need for details. I chose to vent on Facebook, so you can read it there if you want to. I feel better now. It's behind me, and I'm OK. There are bound to be some whackos from time to time. Better get used to just letting them go.

I spent part of the 4th in town watching the parade with my friend Serena. Ashland was packed like a big ol' can of sardines. Madness, but the fun kind. Later, after the parade, the crowd spilled into Lithia Park, which was lined with booths of all sorts; food, crafts, clothes, local organizations, the usual assortment. I was so glad to not be selling beads there. Those asphalt-and-mob shows are exhausting. I did run across a jewelry maker (not a beadmaker), who called herself a "Beadest", with an "e". I don't know what that means. Maybe it's like, Mirror, mirror, on the wall, who's the beadest one of all?...  I guess I should have asked. 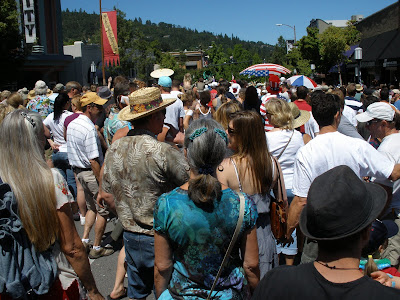 There was music in the park all afternoon, but we only stayed for a little bit of the Ashland City Band playing a medly of all-American patriotic standards. It was kind of cool, in a vintage Americana sort of way. I told Serena I felt like we were in "Witches of Eastwick", but we were missing our third witch, Mitzi, who was home with a cold. So we did not change the weather, and didn't have to deal with Jack Nicholson. What a relief. I just wasn't up for that after the day I'd had on Saturday. 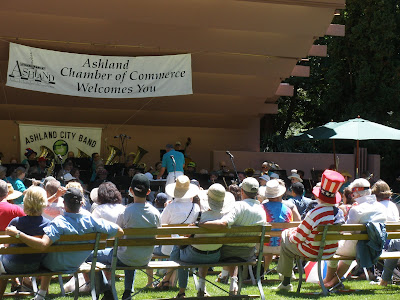 These two were so beautiful, all bronzed from head to toe. All they did was pose for pictures, which was quite enough to earn them some good tips I think. I must have felt rushed, and used my technique for "blind photography"... I don't like to dig out my glasses, so I often just line up what looks like a balanced image, and push the button. Sometimes I get great shots. Sometimes I get a blue potty in the background... 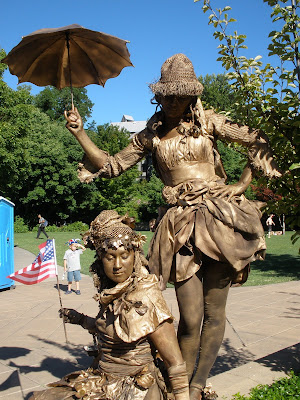 In the evening, Rick and I walked out to the dam to see if we could see the fireworks. We didn't want to go to town, and kind of felt like we should be here to keep an eye on things. I guess we can say we technically "saw" the fireworks, but they were so far away, and it was so windy on the dam, we couldn't hear the Boom, or feel it in our chests, which I think is one of the best things about fireworks. 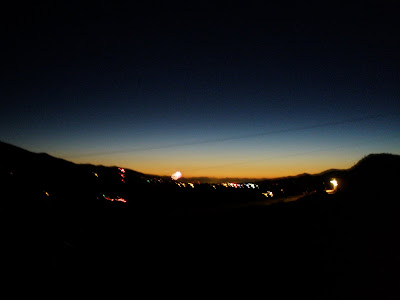 I've spent most of today picking up trash, which at first made me really cranky. Not because I had to do it. I didn't have to. I volunteered. What got to me was the amount of crap people left behind. I was almost in tears this morning, just wondering what is wrong with people. So I decided it would be my gift to the park, and to the planet, so help clean up the mess. Sort of like taking Mom to the spa for a pedicure, you know? She deserves some pampering from us.
I realize that a lot of the litter is sort of accidental, like bottle caps and fly-away bits of paper and stuff. But what about cans and bottles and cups just dropped on the ground or thrown from car windows? And those little wrappers for juice box straws! Those are everywhere! And I'd have to say that piece for piece, there were more cigarette butts than anything else. I don't get that smoker mentality, where their particular type of trash doesn't count. Can somebody explain it to me? And don't even get me started on the dog poop issue...
Sadly, there will always be the people who are just basically pigs. You can't do much about them, but I did get the attention of a group of them sitting around watching me with my gloves and trash bag today. I picked up a dime, and said All the money I find is mine. They perked up a bit, and the beer-for-breakfast guy, with his gut hanging over his American Flag shorts, said, Bet you find some good stuff, huh? I looked at him over my glasses, and calmly said, Oh yeah... I've found a couple of hundred dollar bills before. People get drunk and lose their money without even knowing it. It's not true. I've only found a dime so far, but I'm thinking those guys just might become interested in litter control. You never know.