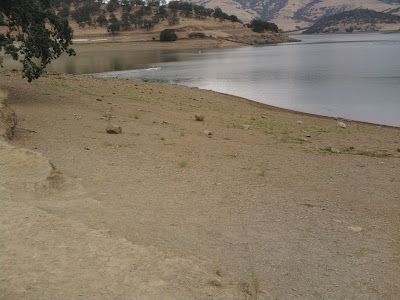 Emigrant Lake is low, and getting lower every day, by about 1-2 feet. It's a manmade lake, created for the local irrigation district many years ago. Later the county came along and got permission to build the park around it, with the condition that the water remain in the control of the irrigation folks for all time. So in a good spring the water level rises to a lovely juicy fullness, up to the edges and pouring over the spillway next to the RV park. Then, as the summer goes on, surrounding fields grow greener while the lake level drops to a discouraging level.

I can see how wars have been fought over water. If there was any question as to who controls the water here, I imagine there would be constant arguments over its use. But a balance of sorts seems to have been reached, and as the lake disappears before my eyes, and valley sprinklers run day and night, the fishermen, speed boats, jet skis, kayakers, and swimmers appear to peacefully co-exist.

The Ashland Rowing Club also operates here, with a big building just outside the park, and dozens of long skinny crew boats out row, row, rowing every morning. I watch them as I walk the dogs along the top of the dam, and for the longest time I thought I should want to give this sport a try... but for some reason, I didn't. It's mostly women out there, mostly over 50, mostly quite fit and affluent looking. They're always friendly when I pass them on the road, as they carry their boats from the boat house, down the increasingly steep beach to the dock. I couldn't find anything wrong with them, until it finally hit me the other day when I was paddling along in my cheap inflatable kayak. They're all going backward! That's what had been bugging me. I hate going backward, in life, in cars, and in boats too I guess. They also have to have someone along in a motorboat, bellowing instructions through a bullhorn, which looks way too controlled to me, not to mention noisy and non-tranquil. 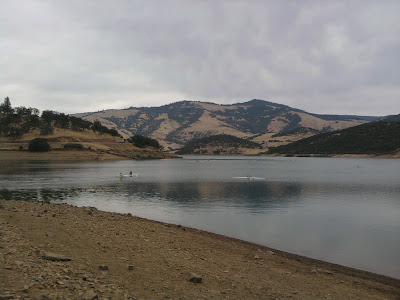 The rowers don't care for me much. I get in the way. I appear to have no purpose... I hear the bullhorn warning its backward-rowing charges to "steer clear of that blue kayak that's wandering all over the lake".  But it's my lake too, and as long as there's still enough water for all of us, I prefer to keep paddling along in my little blue boat, mostly in a forward direction, sometimes in circles, sometimes just drifting. Kind of like life, I guess, if we're taking our time and doing it well.