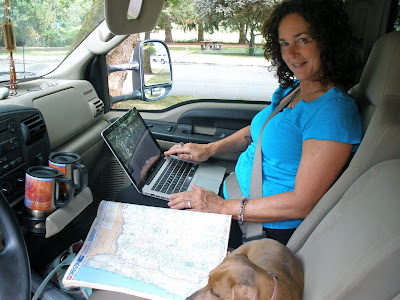 I did it, OK? I bought The Purse. But it wasn't my fault. Really. I mean it. It was all my friend Shirlee's doing. She made me do it, the wicked vixen. She told me she wanted The Purse too, and why couldn't we take advantage of the two-for-one deal and have them sent to her house in Taos, which just happens to be right next to my house in Taos? I could see no logical reason not to do this, so I pulled the laptop out at the next rest stop, fired up the MiFi, and before we could get around that slow moving hay truck, I had ordered not one, but two beautiful Sophia Bags, in different colors, of course, so as not to be too twinsies about it, and poof!, there was the confirmation in my email, saying the Sophias were on their way to Taos, presumably to greet me there on the moment of our arrival.
I can't believe I did this. Well, yes I can. I really wanted this bag, and still do, and now I will have it, and so I can sleep tonight. I can justify this purchase by telling you that I also made use of my mobile internet time by researching cheap places to not-camp for the night while we're traveling to Seattle, and then to Taos. An average of $30 a night adds up to something like a mortgage payment if you do it long enough, so we know we need to find some more frugal ways of parking and sleeping. We passed a casino early in the day, and that made us think, Huh! Great idea! Casino parking lots! But then we found out we'd passed all the casinos along I-5 already, so we needed a Plan B. Then I remembered that Rick had joined the Elks Lodge in Ashland back in January, and one thought led to another, as thoughts are wont to do, and soon enough, I found that the Elks Lodge in Gresham, Oregon allows overnight parking for members for a mere five bucks. To sweeten the deal, Gresham is not far off the route we had planned to take around Portland anyway. And most Elks Lodges have a great little bar with a friendly bartender and good cheap drinks. And if that wasn't enough enticement, tonight just happened to be Bingo Night! We never got around to the Bingo, but I liked knowing it was there. Instead, we had a couple of tasty beverages in the bar while my computer, phone, and MiFi recharged on Elk Electricity, and then "we all" went back "home" to make dinner. 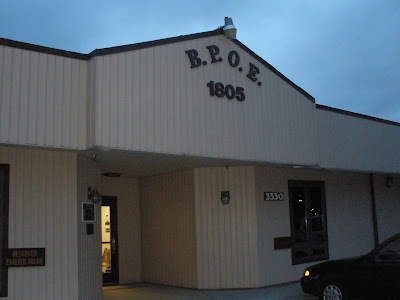 Our "camp" is in the parking lot, with a nice little shrubby parkway and soothing Portland suburb traffic sounds in the background. We have no hookups, so have to be careful with water and lights and such, but it's all OK. It's our first shot at "boondocking", which can be done anywhere from a logging road in the woods to a Walmart parking lot. It just means you only have your own personal resources, like water and batteries and propane. There's no plugging in of any kind, so it's kind of "off the grid" as far as RVs are concerned. Last summer we were too new at all this to even consider it, but now a whole new world has opened up. Our brains are on overtime, thinking of all the places we might be able to stay for free, or for a mere token, like tonight.
There are websites to help out, like Elks Lodges with RV Facilities, Casino Camper.com, and Free Campgrounds.com. And I know we're only scratching the surface. True, we don't have a lovely riverside site and a homey, campground feeling. But what we do have tonight is a safe place that's fairly quiet, and an enjoyable evening with welcoming people who are happy to have us drop by. All that, and we saved at least $25 on RV park fees. So that's half a purse, right? One more night like this, and I've broken even on my bag obsession. After that, I promise, I'll seek professional help.