- October 18, 2010
This is the first in a series of small adventures in and around Taos, New Mexico. My idea is to go out and explore favorite places as well as places that are new to me--well known, and obscure, tourist spots, and local haunts--at my own pace, which is not necessarily that of a typical travel writer. I want to show you this wonderful place from the perspective of one who has lived here for years, and is still discovering it. My hope is not to make you feel that you've been here, but that you want to come here to see it for yourself. 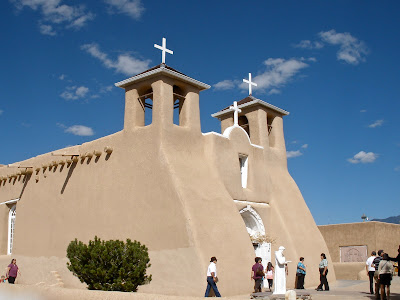 The old San Francisco de Asis church is a well known part of Taos history. It's the first stop to make at the south end of town, as you drive into Taos from Santa Fe. The subject of countless photographs and paintings, it's a must-see when visiting Taos. Living near it, I've stopped to look at it numerous times, usually with visiting friends in tow. The other day I decided to wander over by myself, to check out a local craft fair being held in the church plaza.
Something told me to park in the post office lot next door and walk over, and I was glad I listened. Along with traffic for the craft fair, there was also a wedding about to happen in the church. The parking lot was packed, and so the classic shot of the church from the back was cluttered by cars. You have to be patient to get that perfect picture, in the right light, with an empty parking lot. 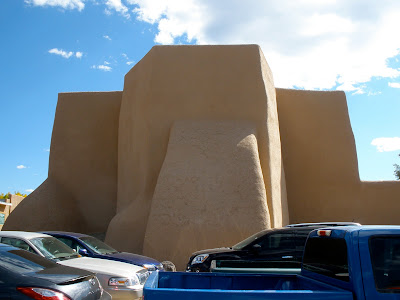 It seems something has always stopped me from going inside the church. I'm not afraid of churches. I've been in many, growing up Catholic, touring Europe as a teenager, and in my wanderings since. But for some reason, I've never gone inside this one. Maybe the outside is so beautiful, it's enough for me. I actually intended to go in on this visit, but the wedding prevented it again, so I walked around the outside, enjoying the shape and texture of this lovely structure which has stood here since its completion in 1815. 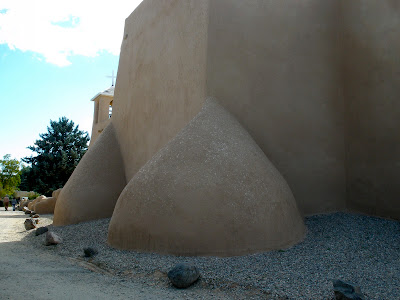 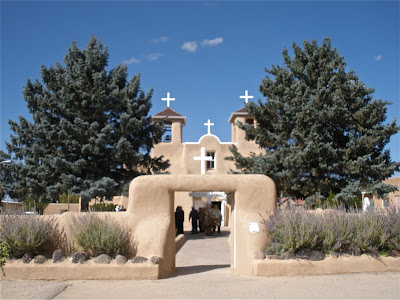 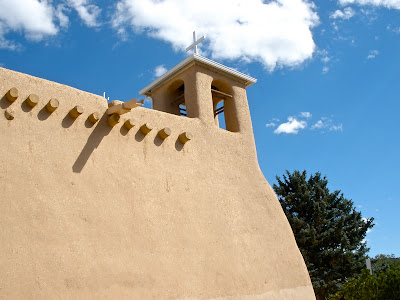 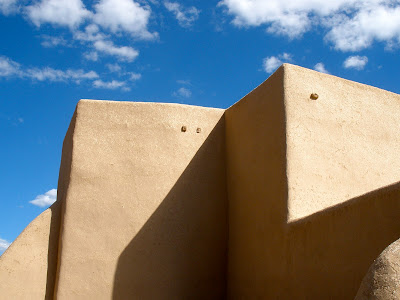 If you look closely, you can see that it's actually made of adobe, or mud. Adobe is a mixture of earth, straw, and water, that's formed into large, sun baked blocks for building. Modern adobe houses, like mine, are made of the mud blocks, and then finished on the outside with a hard stucco sort of surface for durability. Traditional adobe buildings are finished with a mud-and-straw coating that weathers quickly, and needs to be repaired often. If left to nature, old adobe buildings will simply melt back into the earth, as some of the neglected surrounding structures are already doing. 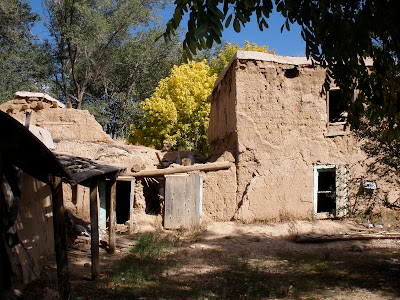 The Ranchos Church, as we call it here, is still in good condition because volunteer parishioners re-mud the exterior every year or so. It wouldn't be nearly as beautiful if it were modernized with a stucco surface. As it is, it seems to breathe with a life of its own, standing tall beneath the blue New Mexico sky. 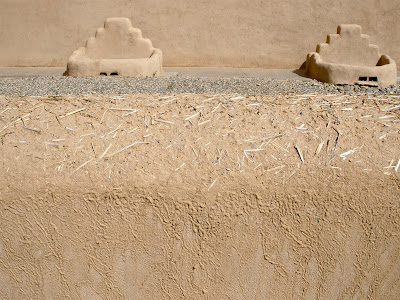 After my walk around the church, I went back to the small plaza adjacent to it. There's a restaurant that has good food, but doesn't serve alcohol of any kind, because of an old law concerning its proximity to the church. Restaurants in New Mexico must be over 300 feet from any church in order to get a liquor license. And while we're on the topic, you can't buy liquor on Sundays anywhere in New Mexico before noon. Even supermarket beer aisles are roped off until that time. Just so you know. Be sure to purchase your Sunday Brunch champagne on Saturday.
The craft fair on the plaza was small but nice. Vendors on the sidewalk, and in the small courtyard, were focused on fiber and textiles, but there was also beaded jewelry and an artist who sculpts 3D images such as skulls and sacred hearts with earth, and then paints them. Adobe art. 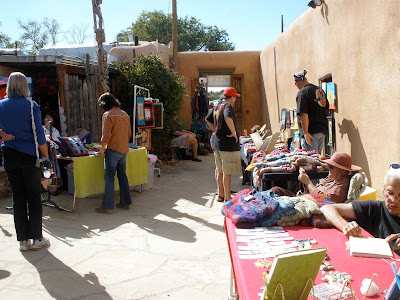 My friend, Katy George was there too, working at Two Graces, and also selling her fabulous hats and clothing. Katy was born in Texas, has lived in Paris, and has been in Taos for a long time. She's seen a lot of changes here, and she's always a great source of information and entertainment. 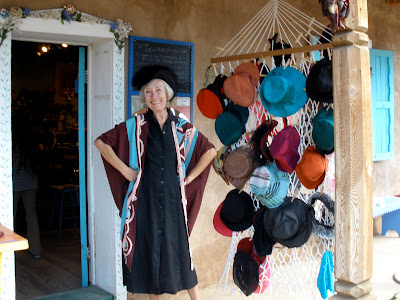 Frana Biederman, of Phi Beta Paca, came by with two delightful alpacas on leashes. They were a little shy, but let me pet them, and then Frana told me the smaller one might give me a kiss. Well, that offer doesn't come along every day, so I leaned down and puckered up, and sure enough, I got a soft little alpaca kiss, right on the lips. It made my day. 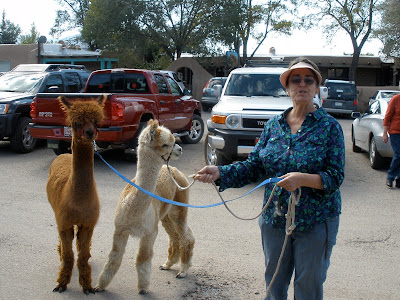 Leaving the plaza, I looked across the street to an old building that's being lovingly, expensively renovated. It's rumored to be a restaurant, but there's controversy over the liquor license and whether it's actually over or under the 300 foot requirement. I guess it depends on who does the measuring. 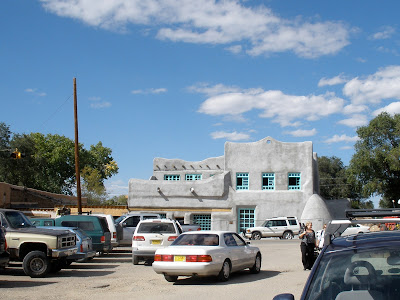 At any rate, it's nice to see things being cared for. There have been times when I've questioned Taos's love for itself, but from what I saw on this one short outing, there are signs of a deep connection between community and place, a respect for the past, and clear intention for the future. I think there will be good reasons for visitors to come here for a long, long time.
Alpacas crafts New Mexico Ranchos Church San Francisco de Asis Taos