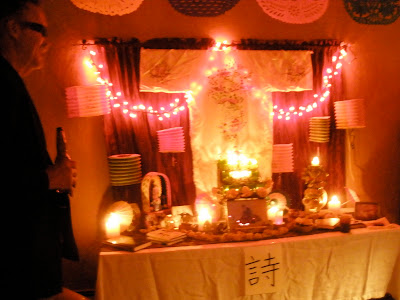 Great party. It goes without saying, but I'll say it anyway. Another Dia de los Muertos Poetry Party success, thanks to Deborah and Thomas, who really know what a party is all about. Good food and drink, good friends, new friends, poetry, music, and some dancing to shake it all up. I, for one, had a blast.

The honored dead poet this year was Basho

, and the poetry style, haiku. I like the concise, small, format of haiku. It's kind of like making jewelry out of words. I wrote a few in preparation for the party, but then I became timid when I found myself in a room full of real writers. So I wimped out and read a few silly poems I found on the Pirate Haiku

webpage. It was totally cowardly of me, but Rick, my ever-lovin' hero, took my notebook from me and read a few of my own haiku for me. It was good to set them free. I wish I could have done it myself, but man, there were some heavy hitters in that room. Nobody threw rocks at me though, and I do enjoy writing those tiny morsels of poetry, so I guess I'll keep at it, just for fun. Here's a new one that came through today:

The costume theme for this party really had me kerbobbled. I just could not figure out a way of "wearing the written word" that suited me. Finally, in a dream, mixed with the worm-faced-zombie theme from Friday, I came up with a silly idea that seemed just right, but actually turned out to be a bit too vague. Ah well...

I made big paper earrings using a deconstructed In-n-Out Burger logo, with cute little rubber worms woven through. One of the yellow arrows pointed IN one ear, and the other pointed OUT, as in "in one ear and out the other". That was the simple play on words. The more complex pun was sort of a vegetarian statement against meat-eating (or shall we call it flesh-eating, in the spirit of this zombie-ridden season?) 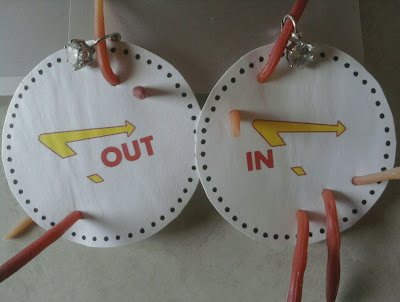 When someone would look at me puzzled, I'd go into sort of a ditzy dead-chick character, and say, The last thing I remember, I was eating a cheeseburger with my boyfriend. Now I'm not feeling very well, and I keep hearing that song that goes, "the worms crawl in, the worms crawl out..." Like I said, too vague. I'm not sure anybody got it even when I explained it. A lot of blank looks. Oh well... I thought I was terribly witty, but I realize my sense of humor doesn't always make it across the street. 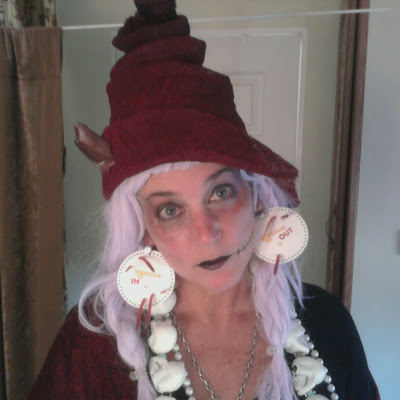 Rick did better. He cut a jagged "crack" in a black t-shirt, and wrote a favorite Leonard Cohen quote on a white shirt to wear underneath, so it peeped out through the opening. There's a crack in everything--that's how the light gets in. Brilliant, as was his black band of makeup across his eyes. They got the poetry, and he even won a prize. Go Rick! 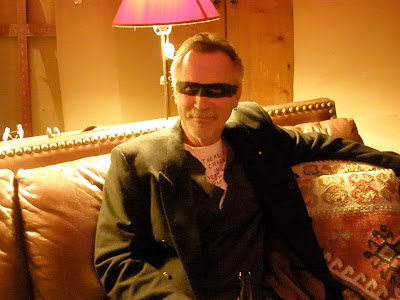 So here we are on actual Halloween. Our faces are tired of masks and makeup, but we still plan to go to the Plaza this evening to see all the kids in their costumes. I guess we get a break on Monday, but then Tuesday is the actual Dia de los Muertos, so I'm sure we'll be out and about again. I can't see any reason to miss the fun when there's fun to be had, and while we're still on this side of the "veil".
dia de los muertos exploring taos haiku halloween New Mexico poetry