Ink For The Greater Good

symbol for Chaos tattooed on my arm. Why? is the question most often asked, and the answer is because Chaos is an inescapable part of life, and also "where great dreams begin." My feeling was, and still is, that we might as well embrace it, make it our friend, serve it cookies and tea, and learn to work with it rather than against it. Rick and I knew we were about to make some crazy changes in our life, but we weren't sure what they were at that point. We threw ourselves head first into Chaos, and have been playing happily in it ever since.

More recently, I've felt the need to encourage some of those Great Dreams to begin to emerge from the Chaos, and the idea for an addition to the Chaos tattoo started forming some months ago. I know some people won't understand it, but I'll try to explain why I'm drawn to tattoos. One obvious, but fairly insignificant reason is that I'm an artist, a visual person, who decorates just about anything that will stand still. I joke that nothing goes unembellished in my world, and it's pretty true. Decorating ourselves, whether it's with clothing, makeup, jewelry, or tattoos, is a way of honoring these bodies we've been given to live in while we're here. We put paintings on the walls of our houses. Tattoos are just paintings on the walls of our selves.

But it goes deeper than that. Deeper than skin deep. For me, every tattoo I have is like a love note to/from God. They're reminders of things that are really important to me, things I want in my face every day, so I don't forget. They help me remember the big picture, and they help me keep my energies directed in the most positive ways to benefit myself and those around me. It sounds totally woo-woo, doesn't it? I guess it kind of is. I'm not one of those Taos Crazies who wander around spouting new age goop all over everyone I meet, but I do believe there's much more going on here than meets the eye, and I do believe things are changing right before our eyes, at a rate never seen before. My personal brand of spirituality is practical and curious. I know there are things we just don't get to know, but I want to gather all the information that's offered. We're all here at an amazing time in history, and I'm really enjoying the ride and the view from my particular perch.

But back to the new tattoo. It's actually nine new tattoos. Because Chaos Theory

and the Butterfly Effect

are interconnected, I wanted to add butterflies to the Chaos. I wanted to shift the energy of the Chaos, and encourage some new and beautiful things to come out of it. Change one thing, and you change everything. This tattoo is a very conscious effort on my part to shift some energy. I made feeble attempts all summer to get this done, but it never worked out. Patience is important when doing Important Things, so I waited, with some sense of urgency. And then, last week my friend Jannine came to town, bringing with her the amazing Emily, who just happens to be a traveling tattoo artist. One thing led to another, as things will so often do, and yesterday afternoon I found myself in a chair opposite Emily, as butterfies magically appeared on my arm. 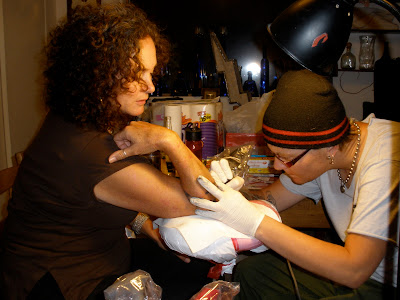 It took about four hours, which was about twice as long as I'd imagined. What I didn't know was that Emily would give me the most detailed, realistic, beautiful butterflies I could ever dream of. I asked for "happy, dancing butterflies," fluttering out of the Chaos, and what I got was even better than my own little imagination could come up with. I sat there, brave and steady, while my shoulder contorted and ached, my hands turned numb and frozen, and the endless scratching of needles on skin was a mix of spa time and torture. By the time we were finished, I think I was a bit in shock. I started yawning uncontrollably, I could only speak with great effort, and all I wanted to do was get to a warm place and rest. Think about it - if someone were to sit in a chair and dig needles into their own skin for hours on end, we'd call them crazy and send them off for mental help. This kind of self inflicted pain is crazy. But it's crazy with a purpose.

When I got home, and Rick made me dinner and took care of me all evening, I felt like some kind of Super Hero, or a Champion of the People. I felt like I had done something much bigger than just "getting a tattoo." It was more like agreeing to put myself through all that so that the positive energy shift I set out to create for myself could ripple out and affect the whole world. It truly felt that big. And maybe it is. Who knows? If the mere flutter of a butterfly's wing can change everything, then maybe my tattoo can do the same.

Here are some next-day pictures of my new Butterfly Friends. Keep in mind that they aren't healed yet. My skin is still shocked and swollen and tender. The finished look will be somewhat different than what you see here, but I know you're curious, so here you go... 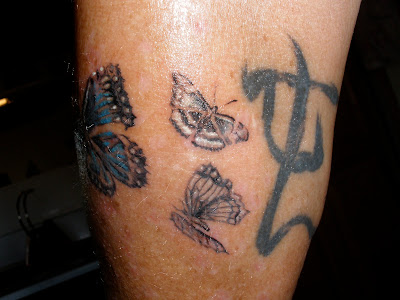 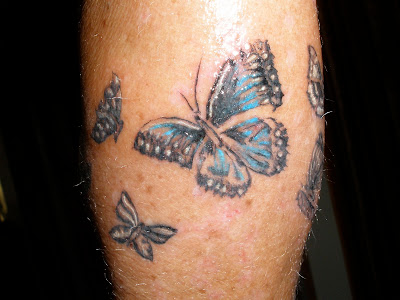 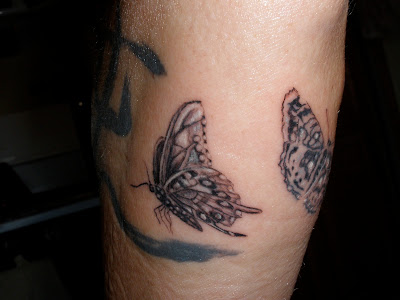 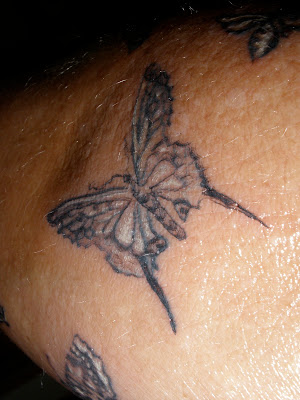 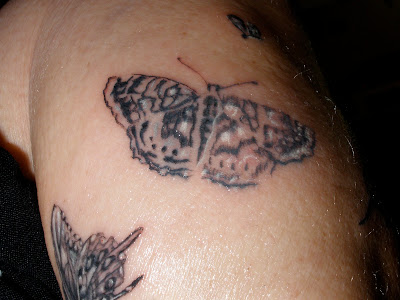 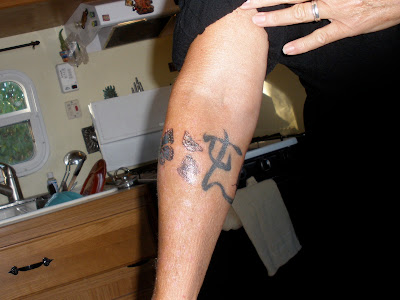