- October 11, 2010
After all that talk about cooking yesterday, I got hungry for something new, and pulled a couple of favorite cookbooks off the shelf. The Urban Vegan

are two that I flip through often when I need some food inspiration. I was in sort of an Italian mood, but I didn't see quite what I wanted in either book. I was wishing for risotto. And also for some tasty greens. And some roasted vegetables. And some beans. And maybe a little tomato-y pasta sauce. Clearly, I was going to have to get creative.

I began to see it as a layered bowl of comfort food, similar to a wonderful dish I've had at the Plaza Cafe in Santa Fe. I can't remember the name of the dish, and it seems to have been removed from their menu. So sad. As I recall, it was a big bowl filled with mashed potatoes, beans, avocado, a grilled portobello mushroom, cheese, and red-or-green chile. Oh man it was good, even though it was one of the most efficient gas-producing foods I've ever eaten...

Shifting the dish from New Mexico to Italy, I started with the risotto. I had to cheat, because I wanted to use some already-cooked brown rice. Real risotto, of course calls for the beautiful, pearly white arborio rice, and it's certainly not pre-cooked. I created sort of a Risotto Blasphemy I guess, but it was really good.

I sauteed some onion and garlic in olive oil, threw in some chopped crimini mushrooms, and then the cooked rice to coat it in the oil. Next I poured in vegetable broth and a splash of white wine to cover the rice, along with a handful of chopped fresh basil and some fresh black pepper and coarse sea salt. I turned the heat way down, and stirred it every so often, while I made the rest of the meal. Adding a little more broth now and then, I ended up using about half a box of veggie broth for two cups of rice, stirring and heating until it was nice and creamy and thick.

While this was going on, I toasted some pine nuts to set aside, and then sauteed some finely chopped kale with olive oil and garlic. Once the greens were wilted and tender, but still bright green, the pine nuts went back in, along with some raisins and a splash of balsamic vinegar. You can get the real recipe from The Kind Diet

, another of my favorite vegan cookbooks. I also added a rinsed can of fat cannellini beans to the mix. I think next time I'll leave the raisins out. They were a little weird with the beans.

Keep in mind I was cooking all of this in the trailer, on a tiny three-burner stove. I used every pan in the place, and had to keep setting hot pans on the table behind me so I could cook something else. I got the grill pan down and made some lovely grilled eggplant. And on the back burner I had some Paul Newman pasta sauce heating up. That was the weak link. Even though there are loads of fresh tomatoes just down the street in our neighbor's garden, I just didn't have it in me (or room in the kitchen) to make real sauce. I should have. I'm sorry I wimped out at this crucial point.

Amazingly, it all came together at the same time, and I assembled our big, comforting bowls of Whatever-It's-Called. Risotto layered with greens-n-beans, then grilled eggplant, all topped with pasta sauce. Whatever the name, it was delicious.

It was pretty funny that my daughter had called just an hour before I launched into this cooking frenzy, and asked why we weren't moving back into the house. She said, Don't you even want a real kitchen?, which I poo-pooed, reasoning that it would just mean bigger messes to clean up. As it turned out, I made a very impressive mess without the help or luxury of a big kitchen. The picture I took of the actual food turned out terrible - all red and glare-y in our cheap red plastic bowls. But if a messy kitchen is any indication of a great meal, this should tell you all you need to know. And notice the empty bowls. We ate it all up. Every bite... 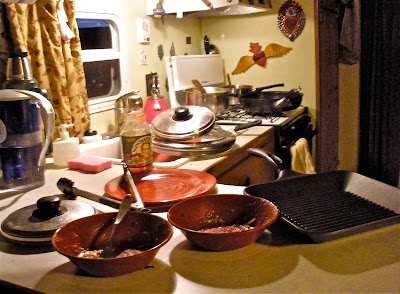 If I ever do this again, which seems very unlikely, I'll either make the sauce from scratch or leave it out all together. It was good on the eggplant, but not necessary on the rice and greens. And I might put it all on a plate, in separate little piles, instead of layered in a bowl, because I kept trying to dig to the bottom rice layer to get bites of it all by itself. If you're at all inclined to make a version of this for yourself, I'd say make the Faux Risotto and the Greens-n-Beans (minus the raisins). In fact, on second thought, I might just do that tonight.
Cooking New Mexico Risotto Vegan