What Color Is The Cheese? 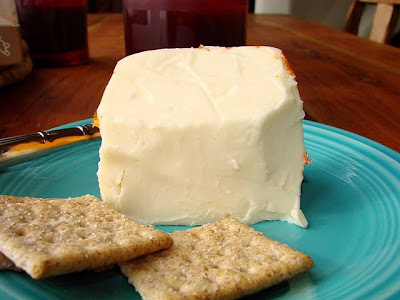 Several years ago, there was a discussion at our patio picnic table, over glasses of wine and a lovely piece of port salut cheese. As I recall, there was some difference of opinion on whatever the topic was, and to illustrate some point I was trying to make about differences of opinion, I asked my friend, What color is this cheese? Her answer was something like, White. Creamy, yellowy white. She was right. Yes, I said, and rotated the cheese plate so the orange-colored rind was facing her. Now what color is the cheese? ...

We've used the cheese analogy for years now. It's a good reminder of how a simple shift in perspective can make all the difference in understanding another person... or even in understanding ourselves.

These days, I'm considering some things I had ruled out in past weeks. Things like maybe moving back into the house. Or even just partially moving back in, like some sort of compromise between trailer life and house life. We like having friends over, which is a pretty silly thing to try in a trailer. And as the days get cooler, and the nights are downright cold, and we spend more time indoors, it might be nice to have a little more elbow room. It would mean having to super-clean the couch to make it useable again, or maybe getting a new one. It would mean we'd need some firewood. And if we decide to really move in, at least to live lightly on the surface of the place until we can sell it, we'd also have to get a new mattress for our bed. The one we moved from the house to the trailer is probably wedged in there forever, and besides, we want the option of driving off, with the trailer ready to use, for at least short excursions now and then.

It would be expensive to move back in. So that leads to the next reconsideration I'm mulling over. Rick will be working at least part time, and has also started collecting his social security early. It won't be quite enough though, so I need to do... something. I could look for a job in town, but my skills are pretty limited, especially after 20 years of working for myself. Logic, and a sad little bank account tell me that my best bet is still making beads. I could see this as painting myself into a corner, or I could see it as a gift I've been given that's still something worth sharing.

I've been using words like "stranded" and "trapped" in reference to Taos, our house, and our current situation. That's certainly one side of the cheese. But what if I turn the plate around and look at it from a different angle?

The mind trick I'm using is just a simple word swap. I could see all this as some sort of "defeat," like OK, I surrender. We're stuck here. Blah, blah, blah... But what if it's actually an "invitation" to stay and play a while? Even if it's not, if I look at it that way, it lightens my mood and allows me to feel less helpless, and more powerful. Is the cheese white? Is it orange? I guess it's both, but I can only look at one side of it at a time.

Maybe today we'll take a crack at cleaning the couch. If it works out, we can round up some firewood and a good bottle of wine, and discuss further options over a nice celebratory hunk of port salut, making sure to turn the plate often. 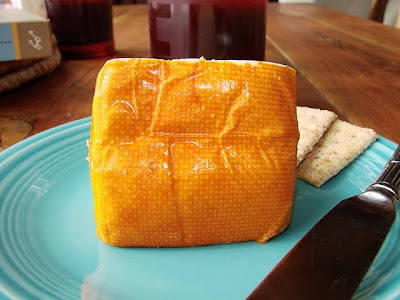