Christmas at the OBL 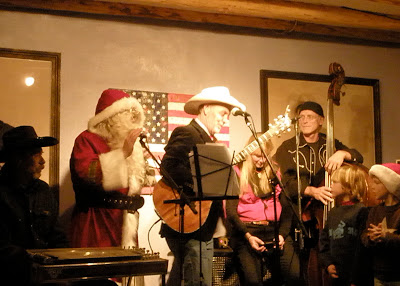 The annual Michael Hearne Christmas Singalong at the OBL Restaurant in Taos is not to be missed. This year was the best ever, and I'm not just saying that because I'm newly re-smitten with Taos. Everyone in our big party said so, and we know a good time when we see one.

It's always a family event, with kids onstage singing with the band, and a visit from Santa, who we know is awfully busy this time of year. There are song books on all the tables, and the audience sings along between mouthfuls of great food (my veggie enchiladas were the best I've ever had there), and sips of make-sure-you-have-a-designated-driver margaritas. We had Santa hats and Elf hats and jingle bells, and sang our selves hoarse, laughing all the way. 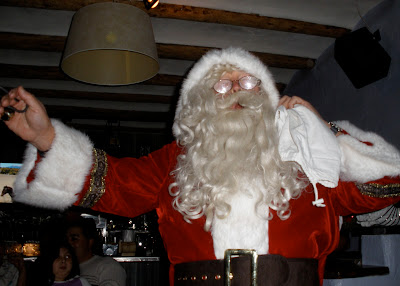 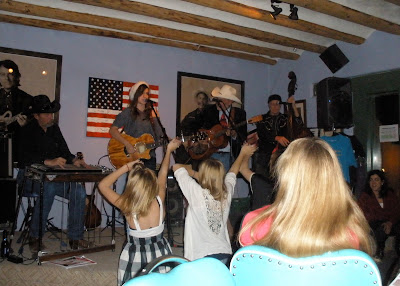 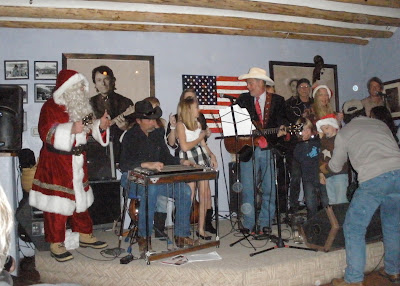 Later in the evening, during the "regular music" set, especially festive-looking folks--Deborah and Thomas, in their Santa hats, among them--were pulled from the audience and brought on stage to sing the ever-popular Drift Away, which was written by Taos's own Mentor Williams, who is also the husband of country singer, Lynn Anderson. Mentor and Lynn weren't there, but I think they would have been pleased with last night's rendition.

(I tried all day, literally, to upload a video of that performance here, but nooooo... it just wouldn't load. This explains the very late blog posting for today. Technology... love it/hate it!)


On the way home, we pulled into the best decorated neighborhood in Taos. A lot of people put lights on their houses, but this little strip of mobile homes, tucked behind the liquor store, has a sense of spirit and fun and holiday pride that beats them all. These homes may be humble by some standards, but they sure know how to dress up and make a whole town happy. 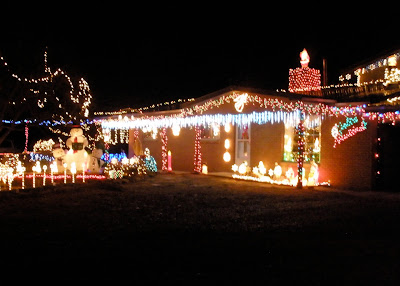 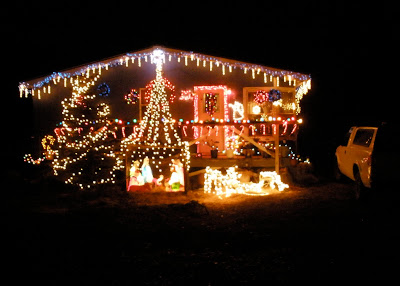 I hope you're enjoying this holiday season as much as we are. If not, pick up a couple of Michael Hearne's CDs for a nice audio hit of Virtual Taos. I can recommend Taos Christmas Eve for this time of year (listen to the title song here), and any of the others are guaranteed to make you wanna put on your boots and do some two-steppin' around the living room.  In the song New Mexico Rain, he says, If I ain't happy here, I ain't happy nowhere... Amen to that, Michael. Thanks for singing us into Christmas!

~~~~~~~~~
Comment on this post to be entered to win this week's Gratitude Bracelet. The random drawing will be held on Friday. For more info, scroll the right hand column of this page.