- December 14, 2010
A few years ago, Rick built a really nice labyrinth in the back yard, out of river rock and gravel. It's a wonderful, calming, meditative space. To be clear, a labyrinth is not a maze. While a maze has options, allowing you to get lost and bump into dead ends, a labyrinth has only one way in, leading you to the center, where you pause and leave your troubles before taking the same winding route back out. A lot of people don't know that. Now you do. 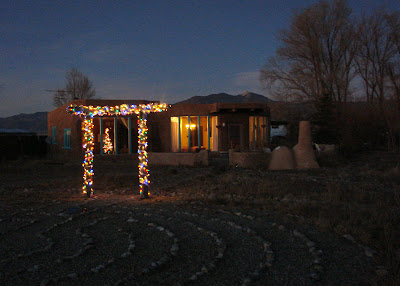 After the labyrinth was completed, we felt it still needed... something. And as Rick looked around the yard for inspiration, he found three nice cedar poles that fit together perfectly in a sort of Asian looking archway. It also looks like the symbol for Pi, and we soon dubbed it the Pi Gate.

The little spruce tree we used to decorate outside the house has doubled in size since we moved here, so this year we decided to decorate the Pi Gate instead. It looks just gorgeous standing out there all by itself at night. The lights on it illuminate the labyrinth enough for night walking under the Milky Way. And I guess I won't be surprised if we start to see strange objects hovering over the yard. We may have created a landing pad of sorts... 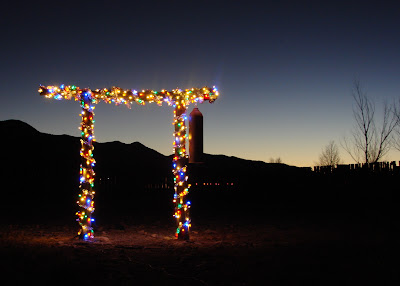 Rick doesn't know it yet, but I'm going to lobby for leaving the lights up year-round. It makes my eyes happy, and I'm much more drawn to go out there and center myself, in that beautiful light, surrounded by the soft, dark night.