- December 29, 2010
What an amazing day. Like quantum physics for dummies. So much has happened in one little day. There isn't room for this much, but here I am telling about it...

I was up half the night, obsessed with all things dirty and blingy, and slept late to make up for my hours of mid-night wakefulness. Rather than my usual morning routine of computer stuff and blogging, we got right to work and headed to the other end of town to get daughter Julia's stuff out of an expensive storage unit, and into our own storage shed behind the house. It took two long trips, in the snow, moving a big bed, smaller furniture, and lots of boxes of uncovered stuff, stuff, stuff.

On the first trip, Rick went into the office to get the key, and ran smack into Donald Rumsfeld. I swear it's true. Don was sending a FedEx package, and made the friendly gesture of introducing himself to Rick, and chatting about how much he likes Taos, and how the family is all visiting from all over. How entirely surreal. We do not in any way perch on his side of the political fence, and I'm really proud of Rick for being so cordial to a man many people regard as Satan Himself. We figure he's in Taos for good reason. What better place for so many people to shine their little lights on him? He might actually have a chance at becoming a Good Human here. But then, it's really not for me to say...

Some time later, moving done, stuff in its new place, day half gone, we headed out for our reward. Coffee! Then on to the hardware store, where I bought some variations on gnarly wire, and some new spongy sanding blocks--one of my favorite tools. Next stop, the art supply store, where Rick picked up some oil painting supplies. It was so spontaneous and delightful. He'd found an easel in Julia's stuff, and decided it would be fun to make use of it, and try his hand at painting again, after 30 years away from it. I was so excited I cleared half my studio to make room for him. And so here we are, sharing yet another facet of our lives. I'm surprised at myself. I like this arrangement. You'd think we'd get tired of each other, but we don't. We're a good team, so this makes sense too. And I'm so thrilled to see my sweetie making art again. 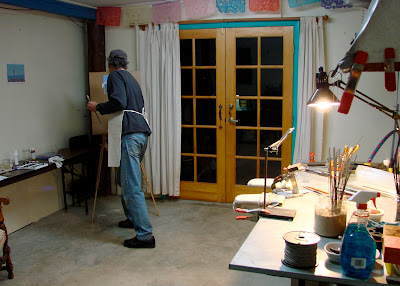 We spent the first half of the evening in the studio, me making what I make, and dreaming of the new things that want to be made, and Rick making a painting, his first in a long time. Snow's still falling, and Rick is on a run now for veggie tacos from the Guad Grill to go with the champagne we cracked earlier. Does it get any better? I think not. But I've been wrong before.

~~~~~~~~~
Leave a comment on this post to be entered to win this week's Gratitude Bracelet. Enter once on each post from now to next Thursday, and I'll hold the drawing on Friday morning. More details are in the column to the right. Good Luck!