- February 25, 2011
The other day, before I had The Bike, I walked to the mailbox at the end of the road. There are lots of neighbors with barking dogs, and most of them are in fenced yards. But one family has a habit of getting puppies at regular intervals, letting them run loose for several months, and then putting them on a chain for the duration of their lives. These people have two chained dogs now, on opposite ends of the yard, with tiny, flimsy shelters and no sign of food or water. These dogs are mean, as you might expect, and lunge to the ends of their chains whenever someone passes by.

There's a younger dog there too. He's a cute brown lab mix, under a year old, and he's been running loose for months. When I walk by, he runs after me, barking and bristling, but when I turn around he skitters off, afraid of me. The other day, the kid who lives there was in the yard, yelling at the dog to leave me alone, so I stopped and asked if the dog would bite me. His reply was, "He shouldn't", which I found to be honest, but not very comforting. But I bent down and held my hand out for a sniff, and to my surprise, the cute brown dog let me pet him. I thought, great, we're friends now, and finished my trek to the mailbox.

Yesterday I decided to ride The Bike down to get the mail. As I passed the Dog House, the two on chains snarled and lunged, and the little guy came after me and ran alongside me for a ways before giving up. I meant to toss him a cookie, which I had in my bag, but didn't quite trust myself to ride one-handed yet. On the way back I was ready for him. I had a cookie in hand, ready to toss, but when I got to him this time, he ran beside me barking, and then... he bit my ankle. Fortunately I was wearing heavy boots, so I wasn't hurt. But dang! This kind of doggie behavior is just not acceptable!

The owner and the kid saw it happen, and both ran out to round up the dog. I stopped the bike as soon as he bit me, knowing if I faced him down he'd run for home, which he did. The owner was thoughtful enough to ask if I was alright, which I was, and I went on my way home.

The whole thing disturbs me for a couple of reasons. First, I don't really like the idea of being chased and bitten by dogs. But the real problem for me is, now they'll probably put that poor little guy on a chain for the rest of his life, and this just makes me crazy. I don't want to start some kind of neighborhood feud, and I understand that there are a lot of things I don't understand about Taos locals and a culture that is not my own. But really... this inhumane treatment of animals is just wrong on so many levels. Can I do something about it? I doubt it. People have been trying for years to get various animal ordinances into place, but the truth is, most people don't care, and there isn't money for enforcement of any kind anyway.

So I guess I have two options: Get some pepper spray and go about my business, or go all the way around the block to get to the corner where the mailboxes are, avoiding the Dog House completely. That's probably my best bet. It will turn a half mile round trip into about a mile and a half, which is better exercise, and part of the reason I want to ride a bike in the first place. This is the wild southwest, after all, pretty uncivilized at times. And I'm the "tourist" trying to fit in here, even after ten years. Still, there are a lot of loose dogs on any route I'll take, so I guess I'll get some pepper spray too. Sigh... There is no simple answer...

~~~~~~~~~
But there is Daily Bling...
This chain is super long, and every link is hand forged and polished steel. It's edgy and elegant and wonderful to wear. It took me three days to make, and I think I have to keep it... unless someone wants to pay me a lot for it, like enough to buy a new bike that can outrun a dog. 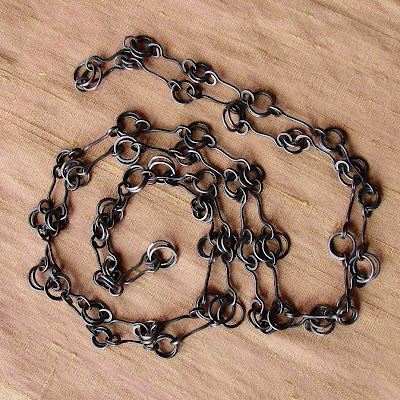 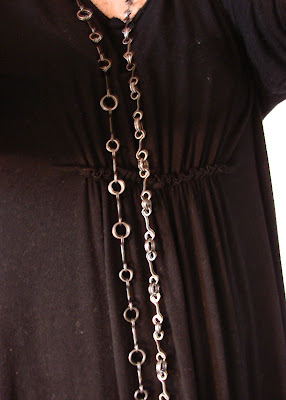