- February 24, 2011
Before we headed out on the road with our trailer (getting close to two years ago now), we sold most of what we owned, and traded two smaller vehicles for one big-ass truck. It made sense at the time.
Back in Taos now, it makes much less sense. Rick uses the truck for work, in his growing Rent-a-Rick handyman business, so most of the time, I'm sort of stranded here at home, with nothing in walking distance except the mailbox, which is about a quarter mile away at the end of the road. I'm going a little stir crazy, but it's just not possible for us to buy me a car at this point, things being what they are and all. So the other day I started mumbling that I wanted to get a bike. Rick thinks it's a bad idea to ride around town, and he's probably right. But I can't be stuck here without wheels of some sort, and the dirt roads are too rough for roller skates.
At dinner the other night with our friends Deborah and Thomas, I mentioned my bike idea, knowing they would approve, both being avid cyclists themselves. And low and behold, Deborah offered to lend me her old bike, a very groovy vintage purple number, with a sparkly seat, a built in head light, and an airplane fender ornament. It's beautiful, and probably about as old as me. 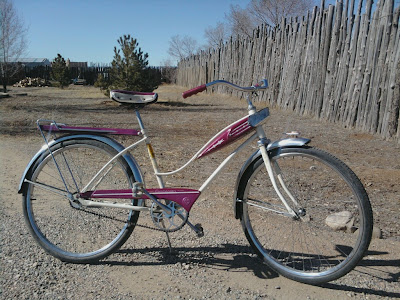 Next morning, Rick checked the inner tubes for leaks and filled up the tires. I gave it a quick windex bath, hopped on, and headed down the road. Amazingly, it was just like... riding a bicycle. It all came right back to me, even though it's been years since I owned a bike. I felt like I was in high school, riding my old "witch bike" with the wind in my hair. Of course I know I have to have a helmet now, which makes me kind of grumpy. But I found some very cute ones at Nutcase, and ordered the "Blackdana" model yesterday. Until it arrives, I promise not to go out on the real streets in traffic.

I went for a short ride yesterday afternoon, just "around the block", which is about a mile of mostly dirt road, and includes a section of the old El Camino Real, which once went all the way to Mexico City. One thing you don't notice in a car, that you do notice on a bike, is gradual hills. It looks flat around here, until you bump into the mountains, but oh, no... The earth is definitely not flat around here. I got to the end of my street, and turned right, onto the paved part, thinking I had an easy stretch ahead of me. But between my, um, slightly older body, and the rather heavy one speed bike, I almost had to get off and walk it to the top of the slope. But being a very determined sort of person, I huffed and puffed and made it on the bike. Then I came home and hit the internet again, this time in search of a more modern cycle to wish for, with perhaps three speeds and a lighter weight. Deborah suggested I check the Nirve website, and that's where I fell in love. I see myself on a beautiful beach cruiser. No mountain bike for me, thanks. I have no intention of doing mountain riding of any kind. I want something stylish and comfortable, just to get me around town. I have my eye on the Lahaina, in teal... 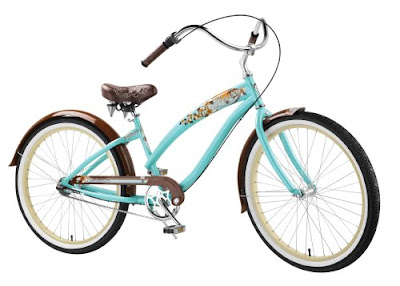 Although the Island Flower, in Black Plumeria would really go better with my helmet... 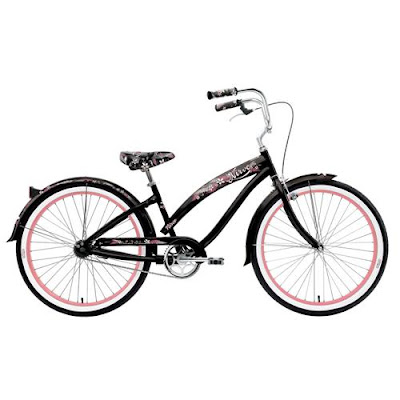 Such a hard decision. But there's really no hurry. A bike like this is about as out of reach right now as a car. But I'll keep wishing and working, and for now, I'm so happy to have the elegant old Purple Passion to pedal to the mailbox.
~~~~~~~~~
And now, some Daily Bling... 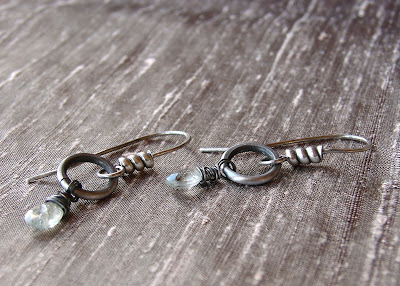