- March 30, 2011
Most of the time, my dreams are just mental chatter, with no usable content worth remembering, and certainly nothing prophetic. Sometimes I'll wake up humming a song I've never heard before, but I'm not a musician, so I don't try to hold onto those. Sometimes I'll wake up with a phrase or sentence that seems ever-so-sage in the moment, but when I write it down and look at it an hour later, it's just plain silly. So when I dreamed a few nights ago that my friend Paul had cooked a beautiful meal, and placed it before a group of old friends, with the mental recipe attached, I woke up thinking, Yum! I have to cook this! Then I wrote it all down... and waited. For a couple of days I kept going back to it, half expecting it to become a silly mess that would never hold up in a real kitchen. But amazingly, after two days, it still looked like a good idea, so last night I got to work and tried it out.

Work is the wrong word. It was more like play. It was fun. It was easy. And best of all, it was good. Really good. Good enough to share with friends at my own table, and good enough to share with you here. This recipe was a gift to me, so here you go -- have some! I'm not sure what to call it yet. Beans & Beans was my first thought. And if you make it with greens instead of green beans, it could be Greens & Beans. Then again, it did come from a dream, so Dream Beans seems right today. Call it whatever you want. If you cook some up, be sure to make the Corn-Wah too, because they were both in the dream, and they go great together.

(Note: Start the Corn-Wah first, so everything will be done at the same time)

Heat up a big skillet and lightly dry-toast the almonds. Swirl in some olive oil, toss in the garlic, and then the green beans. Cook them for a few minutes until they're starting to get tender. Add the cannellini beans, a generous sprinkle of nutritional yeast, and a splash of wine from your glass. Add salt to taste. As soon as the beans are done to your liking (I like them still a bit crisp) squeeze on the juice of half a lemon, give it one last stir, and serve with Corn-Wah, that's been cooking away on it's own all this time.

This is a simple quinoa dish made with corn, which gives it a nice sweetness and texture that's perfect with the Dream Beans. Get this going before you start cooking the beans, and they should both be ready at about the same time. Serve the two together, and you have a complete vegan meal. Or add a bit of fish or something if you feel you need an extra dish on the side.

Rinse 1 cup of quinoa well to remove the bitter outer coating
Bring quinoa to a boil in 2 cups of water, with some frozen organic corn (or better yet, fresh in season), chopped red bell pepper, dried or fresh oregano, and a little salt. Cover and cook on low heat for about 15-20 minutes, or until all the water is absorbed. Rick says this is his favorite quinoa dish yet. 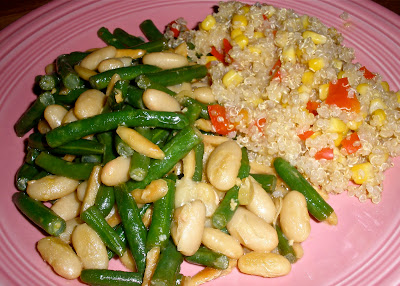 There you go. I hope you like it. It's super easy, and super good. The nice thing about creating something presented in a dream is that it comes form "someplace else". It's not something we'd likely think of on our own, no matter how hard we squeezed our little brain cells together. Where does dream information come from? I don't know... our subconscious, parallel realities, guardian angels... God? It doesn't matter. I like knowing that it isn't really mine. It doesn't come from "me". I'm not really responsible for the outcome if it's lousy, but I also don't get to take too much credit if it's good. It's a useful lesson in humility. As with any inspiration, the important things are to be open to it, accept it as a gift, take minimal credit, and participate. This keeps the window open and the flow going. I hope I'll be able to tap into that quantum reality that offered up this tasty treat again. I don't really know how to do that, except to stay open to it, and to try everything that presents itself. Meanwhile, have a nice dinner, and let me know how it turns out for you!
dream beans recipes