- April 04, 2011
Lasagne. Oh, where to start? With the spelling, I guess. I've always spelled it with an "e" at the end, but I know a lot of people prefer an "a". As I understand it, lasagnE is Italian, and lasagnA is American. Also, lasagnE is the plural of lasagnA, so unless you're making the dish with only one big noodle, you're making lasagne. So much for grammatical correctness. I've always used the Italian spelling because I like to pretend I'm Italian. I think I'm entitled, since my Dad spent two years in Trieste when he was in the Army. He came home with some Italy on him, and in some kind of alternate reality quantum physics way, that would surely be passed on to his eventual children. I am a big fan of quantum physics, although the learning is slow. But if I wake up one morning fluent in Italian and dashing out to buy a pasta maker, don't be surprised.

Anyway, I made lasagne last night, as a special Sunday treat. It's a special food, isn't it? A lot of work, and a lot of mess. It would be so much easier to just make a rigatoni casserole with all the same stuff in it, but somehow, when you take the time to layer those wide, flat noodles between the sauce and filling, what comes out of the oven is extra heavenly and loaded with love for whoever is lucky enough to get to eat it. I have worshipped lasagne all my life, and have made it many times. It had been a while though. Maybe years. I'd gotten lazy in the pasta department. For me, lasagne takes a little bit of mental preparation. I have to be in the right mood, in The Zone even, and yesterday, for whatever reason, I was.

Now veganizing a dish like lasagne can be a bit intimidating. Traditionally it has meat and gobs of cheese in it. The cheese is where the comfort comes from. But I hate vegan cheeses. Every one of them, so far. (I also dislike faux meats. If I wanted to eat meat, I'd eat meat.) I'm told that Daiya

is the vegan cheese to look for, but I haven't found it in Taos yet. Might have to make the trek to Whole Foods in Santa Fe, just for cheese. It can also be ordered from VeganEssentials, but second day air, cold storage shipping is pretty pricey. Might as well make a day of it in Santa Fe. You can probably just drive down the street to Whole Foods, lucky duck.

Back to my dilemma. Not a terrible one, really. People make lasagne without meat all the time. I had some nice whole brown rice noodles, made a good tomatoey sauce, sliced up a load of mushrooms, "prepped" the spinach by opening the bag, and then made a wonderful creamy-rich filling that would stand in for the cheese. The recipe isn't exact yet, but I took notes, and I'll share it here later, or in the book, if the book ever becomes real. If you're a cook, take this list of ingredients and run with it: silken tofu, cannellini beans ( I use these two things a lot for creamy stuff), garlic, walnuts, nutritional yeast, herbs, salt and pepper... I think that's it. A quick buzz in the food processor, and oh, yum. A most excellent creamy goo. Assembled and baked, it was a truly beautiful lasagne, which I forgot to take a picture of. I was too hungry.

We sat there, eating in reverent silence for a few minutes, and nice salad and cheap wine on the side. What can I say? I can't afford good wine these days, but just like pretending I'm Italian, I can pretend I'm drinking a lovely little chianti from the vineyard just over the hill... When we finished, Rick asked me what I would change next time. I always change something. I critique as I eat, making mental notes, commenting on what could be better, and jumping up to write it all down as soon as the plates are cleared. I didn't do that last night. I just... ate... the... lasagne. All the flavor and comfort and texture required of lasagne were there. The only thing missing was strings of cheese hanging down my chin, which I really didn't miss at all.

I have to say, this was something of a Transformative Lasagne. As I ate it, enjoyed it, savored it, for exactly what it was, not noticing, or caring about, what it wasn't, I understood something important about turning regular recipes into vegan recipes. It's not important to exactly replicate a lasagne, or a turkey dinner, or a cheeseburger, or anything else. It's important to make great food, and allow it to be what it is. Taking it a step further, isn't it important to let everything be what it is, from ourselves, to the people in our lives, to our very lives themselves? Making everything exactly like something else, or like something we imagine to be ideal just isn't the point. Lasagne Lesson learned. Thank you. A certain level of acceptance for What Is can be every bit as comforting as a good lasagne. Now that's what I call a mess worth making. 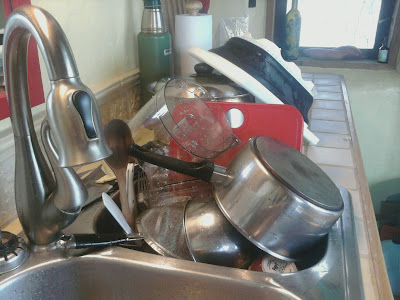