Be Who You Are

- August 20, 2011
Rick and I spent some time at Pride in the Park today. It's part of Taos's second annual Pride Weekend, which promises to grow into a lovely, welcoming "be who you are" event. There were vendors and music, food and a beer garden, Taos Pride Queens and Kings, and a particularly fabulous drag queen em-cee-ing the event. When she was Liza Minelli, the crowd went wild. We wandered around a bit, stopped for a beer, and bought our rubber rainbow Taos Pride bracelets. It was great to see so many locals families there too, uniting cultures and different facets of the community in a way that made me feel all warm and fuzzy about our little town.

Sadly, there was a group of small-minded, big-mouthed "Christians" who did their best to spread hate and fear in a place where people were only interested in love and acceptance. They were really awful, and sort of comical at the same time. It's amazing to me that there are people like this, but I suppose there always will be... They were kept outside the fence by several police officers, but they could be heard over a bullhorn half way across the park. What would the Real Jesus do? I'll bet he'd thump 'em on the head, if he even took the time to bother with them. 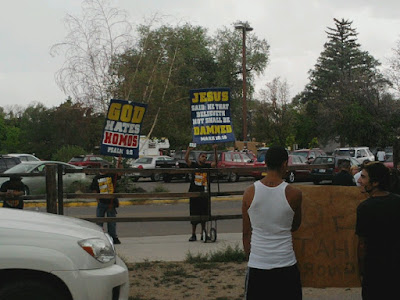 There was another small group of young men facing them, smiling, chatting, laughing, and sending out the love. They didn't let the bad guys get to them, and I was proud of them for keeping their own balance and peace. I might have changed the "God Hates Ignorance" sign to something like "God Loves Me Too," but still, they were sweet. 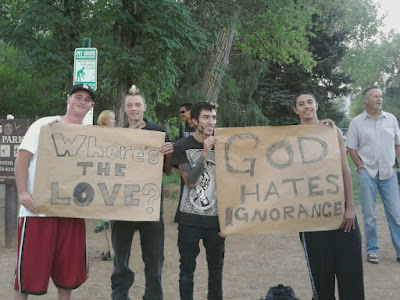 As we walked back toward the main (happy) crowd, it began to rain, and soon it was pouring. Rather than dampen spirits, it seemed to elevate the collective mood another notch, and people cheered and danced in the downpour. And as many of us took shelter under a big tent and enjoyed the music onstage, the angry yelling in the background slowly faded, and the Mean People were simply washed away. 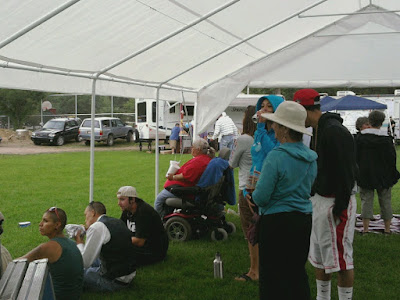 "Today you are you, and that is truer than true. There is no one alive who is youer than you." Dr. Seuss