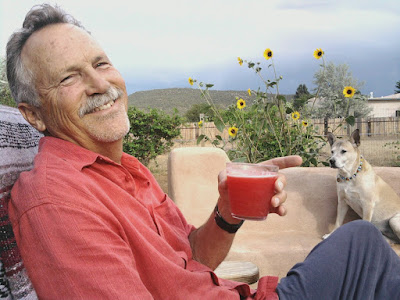 The other night I wished out loud for a Cosmo at cocktail time, but the only ingredient we had was vodka. Moments later Rick had the great idea to buzz up the watermelon in the fridge and mix it with vodka. Oh yeah. He likes to make me happy.
Rick got busy with the blender while I pondered other possible additions. Then I got out the martini shaker and got to work. I was a cocktail waitress at Harrah's Tahoe for years, but never spent any time behind the bar. This was just like cooking though! Fun and easy, and often best to keep it simple.
I put some ice in the shaker, two shots of vodka, 1/2 a shot of orange liqueur (Grand Marnier would be far superior to the stuff I had on hand), every drop of juice from 1/4 lime, and then filled it up with the blender-ized, liquid watermelon. A few good shakes later, we had fresh, nearly-healthy Watermelon Martinis, that just happened to match the shirt Rick was wearing. That's good I guess, if he intended to slosh, but mostly it just made a nice picture. I feel another batch coming on tonight. Cheers, and Happy Friday!