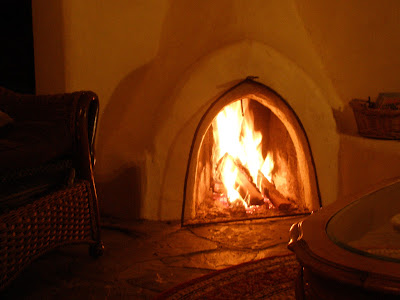 It's been so hot here, and suddenly... it's not. It's been raining (mostly) since sometime yesterday, and tonight the damp chill in the house made us feel the need for the first fire of the season. It's a hard thing to give in to, so we didn't go for the big wood stove, but only the little kiva in the dining room. It's so cute and cozy. Almost like a camp fire indoors.
It's been quite a week, with car shopping and waiting for deliveries, and now learning how to use all the things that have finally been delivered. It's not that we're going crazy buying a bunch of new things. More like trading things we no longer need for things we will actually use.
Since selling the trailer, which we can't make proper use of at the moment, the BigAss Truck has become the wrong vehicle for us. Besides being huge and hoggish, it's only one truck, and there are two of us who need to get around. It's been two years since I had a car of my own, and I'm feeling the need for some independence. So the BAT has been traded for a lovely white 2008 Toyota Rav4 for me, and Rick bought his dear old Toyota pickup back from the friend we sold it to when we left. He's happy to have it back, and I'm beyond happy to have something fun and pretty and smart to drive again. I picked it up this afternoon, all cleaned up and Toyota certified. Driving back home through the canyon, along the Rio Grande, I was grinning so hard my face hurt. The feeling of freedom that pulled out of the driveway along with the trailer a few weeks ago caught up to me again today, in the form of small white SUV that will take me anywhere I want to go.
Arriving home, I was also met by the new iPhones we'd been waiting for since yesterday morning. It was time. Our old phones were starting to lose their buttons and abilities, and I'm kind of adamant about keeping up with technology, even though I'm usually about 5 years behind. I want to be sure they get it right before I jump into the parade, but I never want to get so far behind I can't catch up. It took us a couple of hours to download everything, transfer contacts, update software, and figure out how to make a call, but after that we were wandering through the apps options, connecting to Pandora, and taking pictures. It really is a very intuitive phone. I know mine of going to be my friend.
The other gift awaiting me today was a big, deep cast iron skillet I'd ordered a week or so ago to replace another failed non-stick promise. I decided it was time to go back to good old cast iron, which really feels like going forward. Somehow, it fits perfectly with the nice car and the fancy phones. I think it's because the goal is to let go of what doesn't work, and bring in what does. Having new stuff doesn't necessarily mean having more stuff. Other things are leaving here as fast as the new things are coming to us. There's a good clean balance to it that's uncluttering our lives in a really soothing way.
Today felt kind of like Christmas. So many wonderful gifts, after so much anticipation... and often impatience. Waiting for Santa has never been easy. Tonight as we sit by the first small fire of many to come, it all seems just perfect, and certainly worthy of gratitude and celebration. 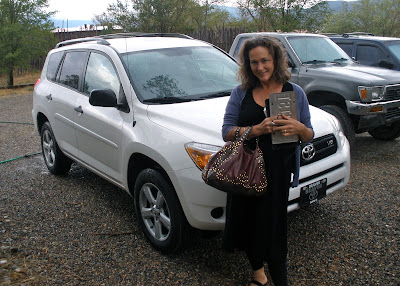