- October 04, 2011
The more I have to do something, the more I don't want to. I really, really need to make some beads for the upcoming show, so what have I been doing? Cooking, of course.

I was almost-invited to cook for a small group of vegans attending a conference this week, at the hotel Rick works for. The owner decided to do it herself though, which I think might be a mistake, since she's not veg-inclined herself, and the main restaurant on the property is a steak house. I worry that she'll do something like cook a veggie burger on the same greasy grill as a cheeseburger. Eeewww. I don't even know these people, but I want them to be well fed, and well cared for. It's silly, and there's nothing I can do about it, so I'm letting it go. Besides, the hotel owner will learn some great things while she tends to these people. As always, I'm sure it's all working out perfectly.

But when the idea first came up, I had a dream about some lovely red bell peppers stuffed with a mixture of quinoa, jalapenos, apples, and toasted pine nuts, topped with a creamy cashew cheese sauce. So, not wanting to make beads yesterday, I made some peppers for instead. I had poblanos instead of red bells, and I think the bells would be better. I'll also add a little more sweetness to the stuffing next time, like currants or raisins to create a nice contrast with the spicy jalapenos. The cheesy sauce, however, was perfect. So more on all this once I get the whole dish just right.

While I worked/played with the peppers yesterday, I was also baking up some sweet potato dog treats, and inventing a marinade for the baked tofu I wanted for today's Tofu Tuesday offering on my other blog. It's all part of the creative process. We all create, although some of us don't realize it. I've had to figure out over the years that it's best to go with whatever it is that inspires me in the moment. If it's forced, it doesn't come from that Cosmic Pool of Divinity that lets things flow from us effortlessly and beautifully. Patience and a certain amount of surrender are key here, because when the timing is right, even those things I'm skillfully avoiding will come back to the top of the Inspiration List.

Maybe I'll make beads tomorrow. Today is all about the tofu. 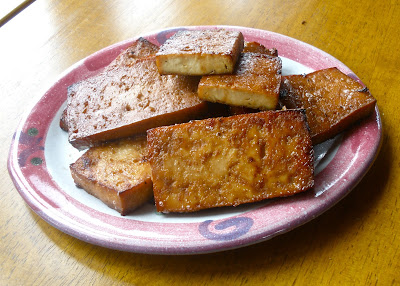