- January 08, 2012
It's been an interesting couple of weeks in my own personal CyberLand. I joined the mass exodus from GoDaddy, moving all my domain names to another server. It's a long story. Not important to my story here. You can research all the hubbub if you want. Anyway, I moved 5 domains successfully, I thought, and then a week later, something glitched in the transfer, and nobody, including me could get to this blog. I read the instructions over and over, did what they said, contacted tech support with my "urgent" message, and three days later... finally got an answer. I changed one little thing, and a few minutes later, magically, miraculously, I was back.

While all this was going on, I got numerous emails from friends/customers/readers who were concerned not only about the whereabouts of my site, but touchingly, about my well-being. Without them, I might have seriously considered closing the blog all together. I mean, really, how important is it? Just another blog in an ocean, a galaxy, an infinity of blogs. In the big picture, it doesn't matter a hoot. But I live in a small picture, and I guess it sort of matters to me, and maybe to about 12 other people who read it regularly. And maybe that's enough, because when I thought it was gone, I did everything I could think of to keep it.

My other Post-Holiday CyberProject was to hold a BigAss Bead Sale, in hopes of clearing out the inventory I didn't sell at the local holiday show, and in the process, clearing mental space, making room for new inspirations to come through. There's little incentive to make more stuff when there's already too much stuff sitting here looking at me. It's like when the fridge is full of leftovers, there's not much reason to make new food. So I had a sale. The biggest sale I've ever had. Times being what they are, people are still stuck in a mentality of lack. We believe we can't have, and don't deserve the little niceties in life, and instead spend our money on... well, mostly crap, because it's cheap.

My sale was something of an experiment. I wanted to see what people are really willing to spend on beads these days. I thought I'd finally entice those people who have been on my mailing list for years to buy something they've wanted all that time. I listed over 100 beads, and have only 2 left now. Not bad, not bad at all. But I sold most of them at less than half of what I used to get for them And most interestingly, almost all of them went to familiar customers who already have many, many of my beads. I saw a few new names, but not very many. So now I'm perplexed, and feeling somewhat... tentative... about beads in general, and where to take them from here.

Since I've tried and failed for the gazillionth time to figure out what people want, offering what they'd said they wanted, only to discover once again they were just kidding, I'm back to my Uppity Artist ways, which allows me to do anything I want, and just hope for the best. I'm tired to my toes of making flower beads. Maybe they'll bloom again in the spring. I don't know and I don't care. I'm currently smitten with the idea of filling little glass globes with beautiful things. So there's that to continue, in various forms. And then there's just play time at the torch, which is something I forget about when I'm all head-down-gotta-make-a-living.

I've spent a few days in the studio, just playing with an idea that surfaced in my sleep - something that's happening more and more, as I welcome and encourage Sleep Thoughts. I cleared away all the old glass, and deliberately pulled out just a handful of colors, and some white, black, and sparkling goldstone. I cleaned a bunch of clear, and traded in my ever-present tray of 2mm CZs for even tinier ones. I can barely see them, but they're just the right thing. Blending, spinning, stretching and twirling all this together, I turned out a batch of beads that make me so happy I don't even want to sell them. But of course then Business Brain steps in, clears her throat, and reminds me... a girl's gotta make a living. Sigh... okay... I'll share, but I'm keeping a few, and making more, just for me. 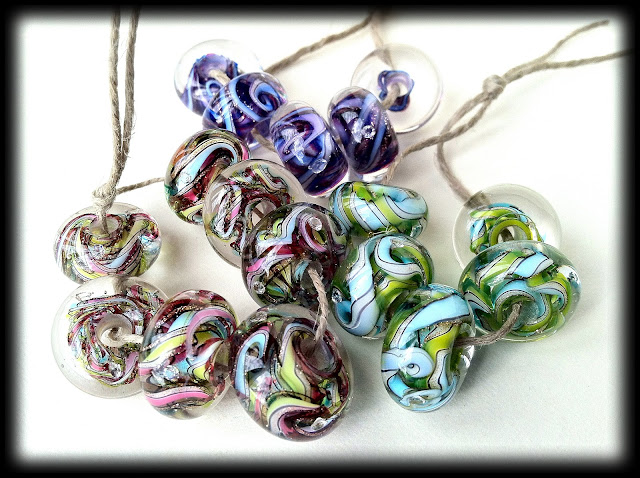 I needed some help naming them. I texted a bunch of possibilities to my daughter, like Ribbons, Streamers, and even... Clown Guts... hahaha! I like that one, but realize it has some marketing limitations. Almost instantly, she fired back, They look like that Wonka candy, Laffy Taffy to me. And that was that. Laffy Taffy. Perfect. Let's not take all this fun stuff too seriously. Beads are here to make us happy. Somebody else can make great art. I want to make your eyes happy, your heart sing, and I want to decorate everything that will stand still.
So here I am, holidays over, messes cleaned, space cleared, glitches fixed, ready to roll again. Getting back to creative work is not the same as going back to a regular job. Sometimes it requires a start-over. As it turns out, I do want to keep this blog going, and I do want to keep making beads. The important thing in a creative start-over is to do at least something, if not everything, differently. There's the challenge, and... there's the fun.