- April 18, 2012
Kim and Lauren are a mother/daughter team, training to run the Disneyland Half Marathon in September of 2012. Kim, the the 50-something mom is vegan, and is training at the literally breathtaking altitude of 7,000 feet in Taos, NM. She has never been any kind of athlete before. Lauren, the 20-something daughter, is mostly vegetarian, and is doing her training in Seattle, WA. Running isn't new to her, but distance running is. This weekly blog, written by both of them, documents the journey, and hopefully, will inspire a few others to follow a dream, do something that's harder than they ever imagined they'd do on purpose, and enjoy the entire journey. Find all the entries by entering "Kim and Lauren" in the "search this blog" box to the left.


Kim:
Well...
As expected, nothing is as expected. My cooking course is taking up huge amounts of physical and mental energy, as well as most of my time. The weather is mostly very "Seattly," which is damp, cold, and sort of unpleasant to be out in, my foot still hurts, and Lauren is as busy as I am. We haven't had a chance to run together yet, and I'm not running at all this week. I have to let go of the feeling that I'm doing something "wrong." It is what it is, and it's all just fine. The "plan" of the moment - and I laugh at myself for even using the word - is to cook my brains out, let my foot heal, hang out with my kids as much as possible, and just enjoy this weird Seattle ride. When I get back to Taos I'll get back to running. I still have plenty of time to be ready for the race in September. It's been suggested that maybe my foot hurts because I've been so insistent on "kicking my own ass." I have to ease up on myself, or risk getting seriously broken.
Deep breath... letting go...
Lauren: 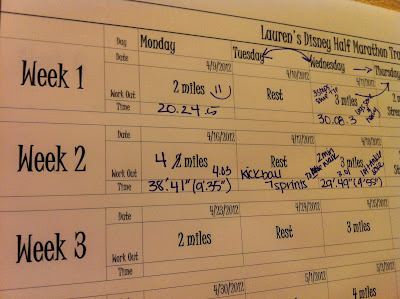 For the last week or so there has been a lot of talk about the 3-mile hump. Basically I am a believer that once you can run 3-miles without stopping running get’s easier. Now I have yet to run more than 4-miles, but I still think I am right… per usual.
Last week was week one of my training schedule. WOW! I did 2-miles Monday and played kickball on Tuesday. I am embarrassed to admit I was so sore on Wednesday from kickball that I couldn’t do my run. Clearly kickball uses muscles I don’t normally use. I switched a few things around in my training schedule and ended up running 3-miles Thursday and 2-miles Friday. Saturday my left ankle was bothering me and since it’s so early in the game I figured it best to rest it than risk it.  I rested Sunday too, just to be sure I wasn’t going to hurt myself and then got back out there on Monday.
I did my longest run to date on Monday, and I could not be more proud of myself. I ran from my house through Seattle’s University District, I needed some change of scenery to trick my brain of the distance. Of course I knew where I was, but my running feet had never been there before, which made all the difference in my head.
I really did enjoy my run, but there were a couple obstacles I encountered. For one there were hills, lots and lots of hills… OUCH! Even though it hurt like hell I felt pretty badass each time I reached the top of one without falling over. For two there is inevitably someone cooking bacon or cookies or something else I can’t have that smells divine, don’t they know I am trying to run!?, All in all it was a good run, 4-miles in 38.41 minutes.
Yesterday was kickball, some sprinting, but mostly standing around. Today I did a short 3-mile run around the lake before work. I finally feel like a runner, it feels normal getting up and putting on my shoes. It feels great to be able to run without gasping for air or be in too much pain. I swear it’s the 3-mile hump! This weekend I am going for 5 miles, and I can hardly wait!
Kim and Lauren