Groovin' to the Blues by the River 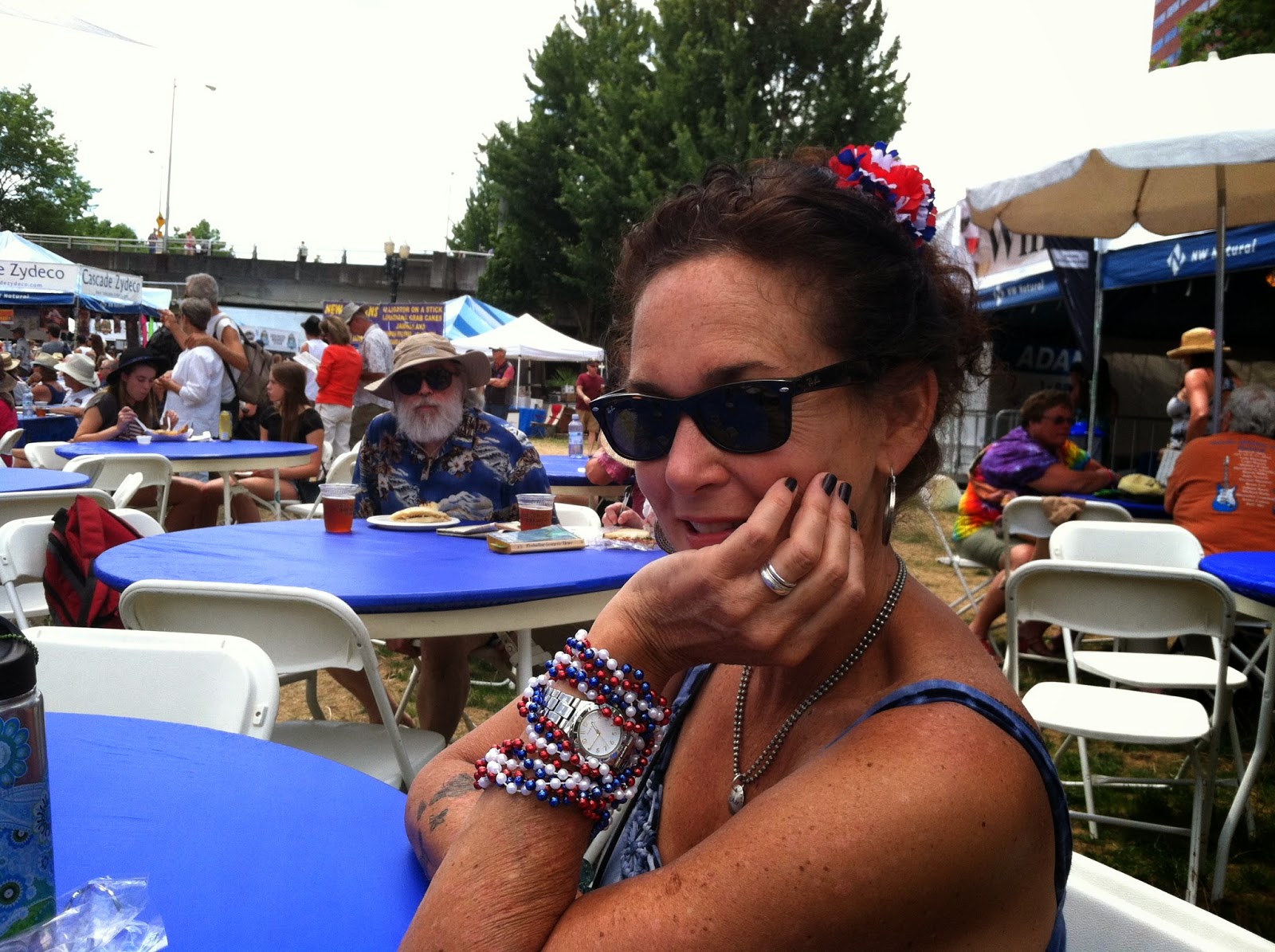 We spent (most of) the 4th of July weekend just a 10 minute walk from home, at the Portland Waterfront Blues Festival. We're not big on crowds, but since it was so close to where we live, it seemed kind of wrong not to participate. Besides, it benefitted the Portland Food Bank, and you know how I like to get people fed. 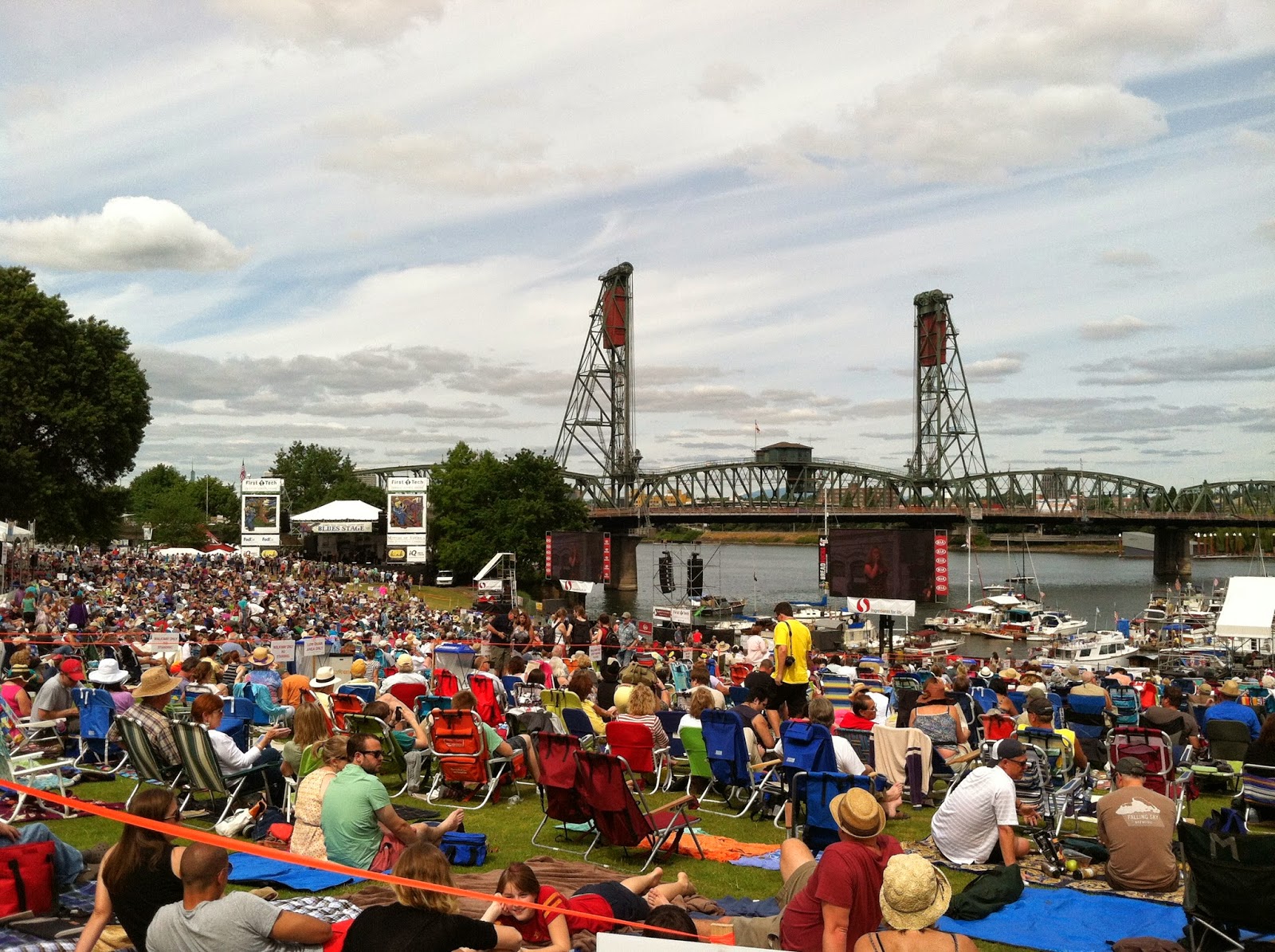 It was an amazingly well-organized festival, except for one little glitch on Friday, when they let so many "day people" in that the fire marshall closed the gates to re-entry in the afternoon. This meant that folks like us, who paid a bunch of money for a 4-day pass had to wait in line to get back in if we went home to feed the dogs, while others with ten bucks or a couple of cans of food to donate streamed in and settled in for the fireworks. Not cool, and I imagine they'll be hearing about it from plenty of people. We somehow managed to slip right back in though, thanks to a sweet volunteer who didn't really know the rules. Oh well! 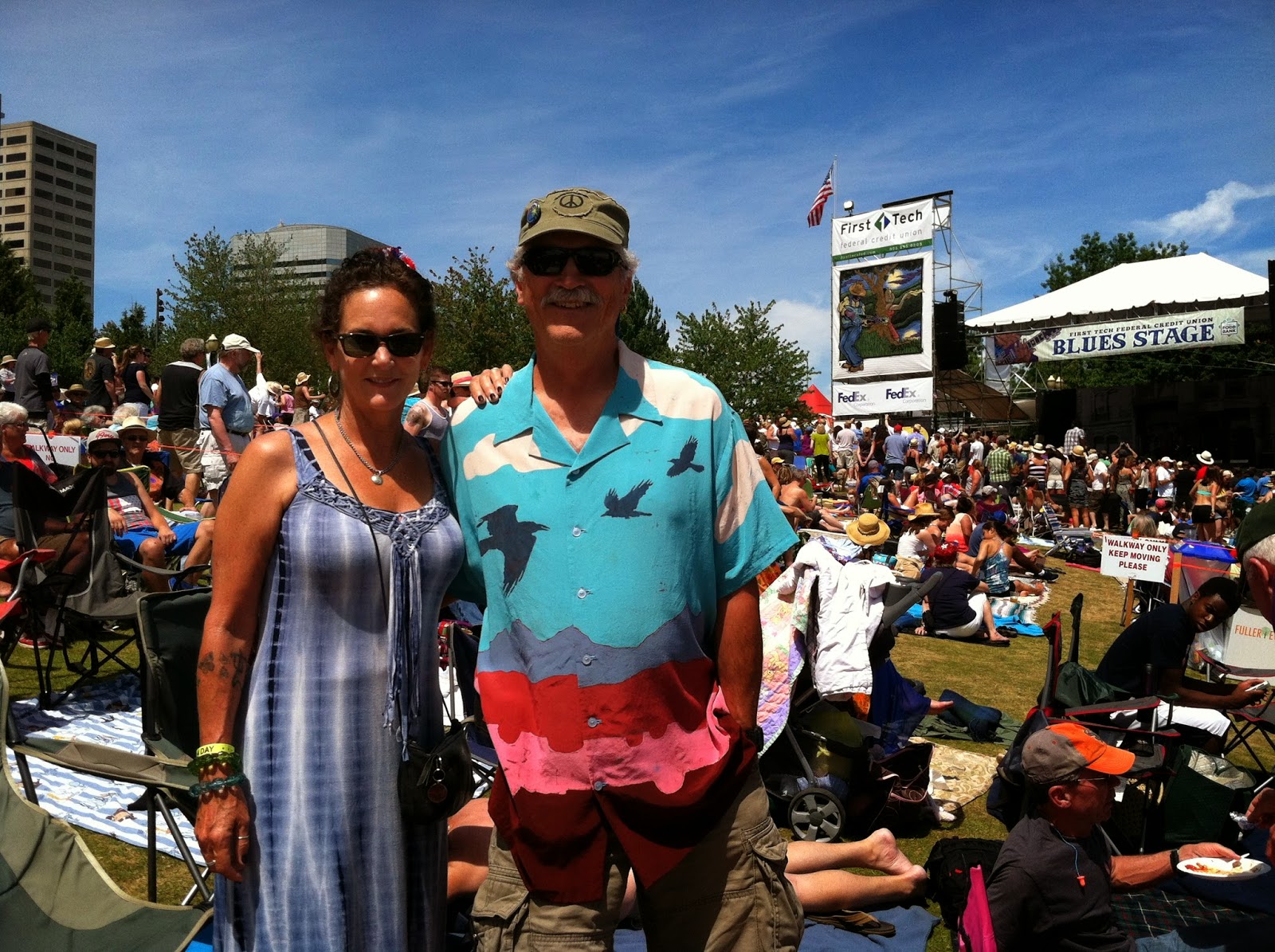 Other than that, and the crushing crowds on Friday, there was a lot to like about the whole shebang.  There were four stages - two at each end of the huge grassy area, and two tucked back into another smaller, quieter area. We preferred the small stage energy to the booming hillside, but each had its merits. I also loved that it was a completely non-smoking event, with smoking areas well away from the seating. Crowd-herding was better than I've seen in some places, with fenced off walkways where standing around was not allowed. Volunteers everywhere kept things flowing smoothly, and there was even a big booth where volunteers filled water bottles with good filtered water for free. Gotta love the volunteers!

The music was terrific, which ought to go without saying. Lots of blues, swing, zydeco, funk, and more. And acts like Joan Osborne, Boz Scaggs, Maceo Parker, and Curtis Salgado filling in for Gregg  Allman. Rather than try to see and hear everything, we just wandered around and took our chances, knowing it would all be good, and it was. We actually took Saturday "off," after feeling sort of damaged by the heat, volume, and crowds of Friday. By Sunday we only felt the need for a short stay, so went in the afternoon and hopped from shady spot to shady spot, just relaxing and taking in whatever happened to be there. 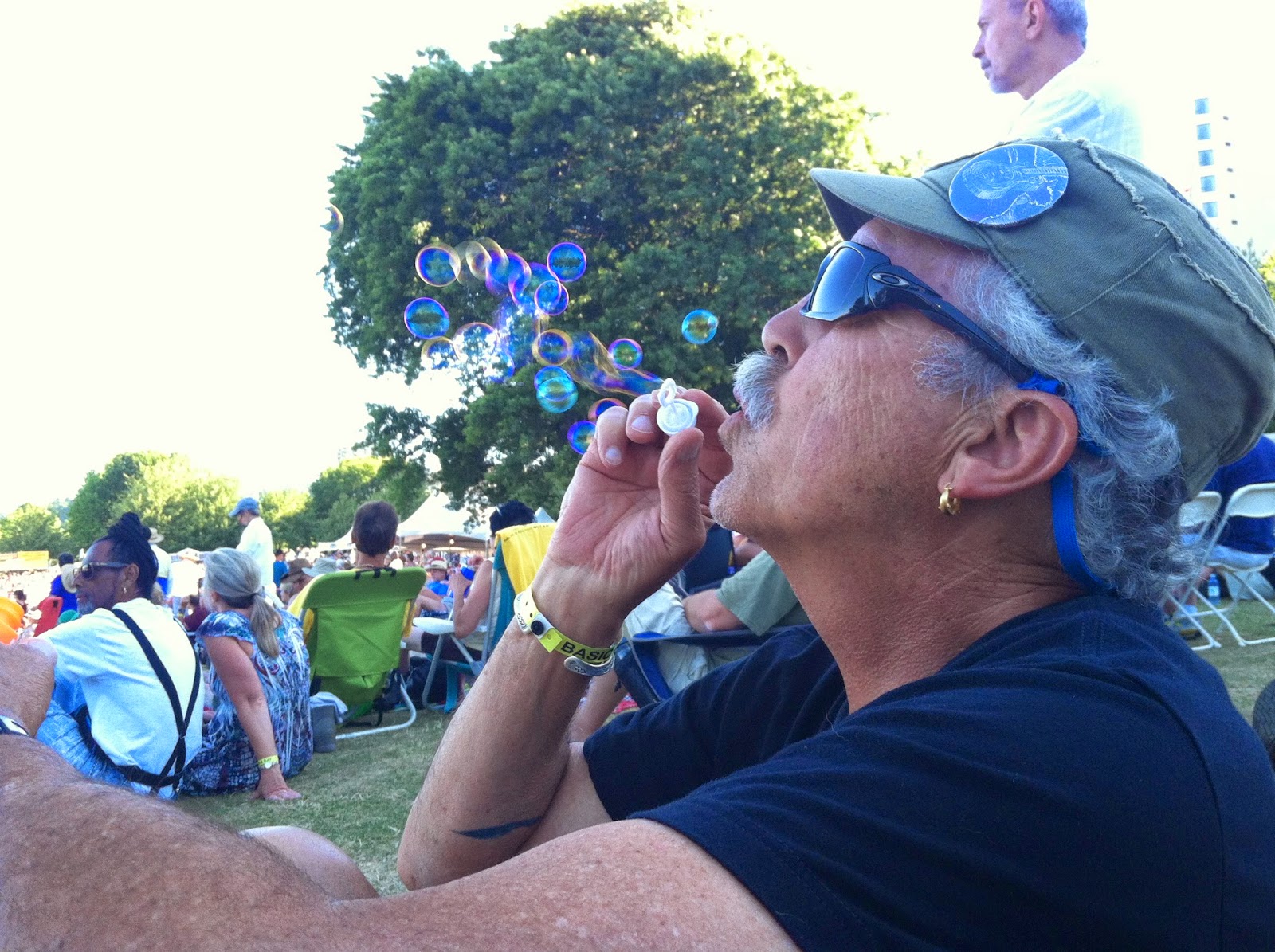 As it turned out, my favorite band of the weekend was the last one we saw, and one I wasn't familiar with. Dumpstaphunk, with Ivan Neville was so much fun I pulled up my last remnants of energy and danced with the rest of the crowd. We didn't stay till the close of the festival. Enough was enough, and besides, the dogs missed us. 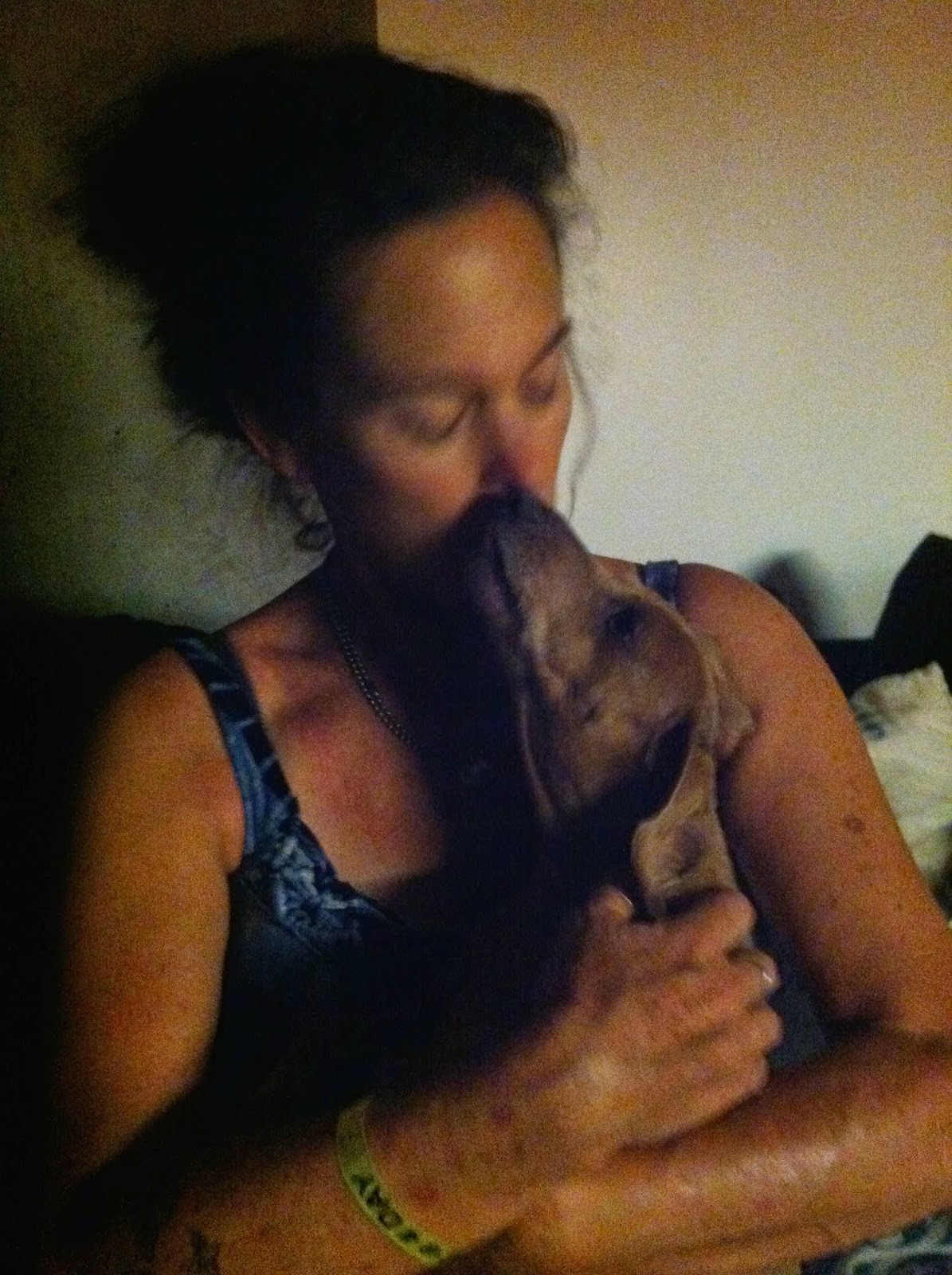 Will we go back next year? Well... I'm thinking not. But I'm glad we did it once. It was a great way to spend our first (and maybe not last) 4th of July in Portland. 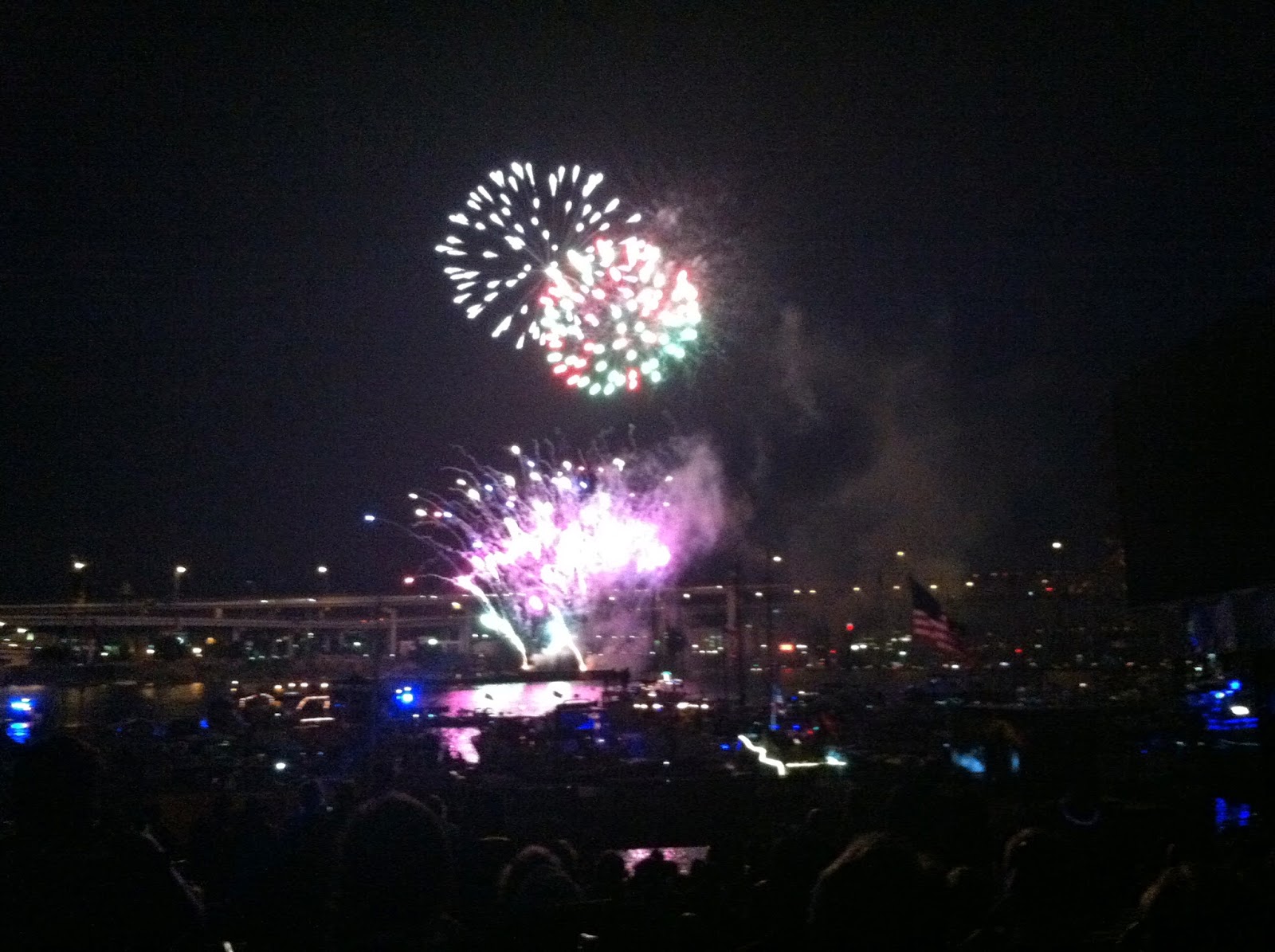