I Knit in Public

- October 04, 2016
After writing the Knitting Meditation post, I wondered if I might grow tired of knitting and let it drift away, as sometimes happens with things that seems like the thing when they first appear. The opposite has happened, actually, and this surprises me.

I missed World Wide Knit in Public Day this year. I was in San Jose and didn't find (or have time for) a knit-in anywhere in the area. When I got back home to Portland, I visited one of my favorite yarn shops, Knit Purl, where I picked up some gorgeous organic cotton yarn (which became the scarf below, that I finished and wore on my daughter's wedding weekend). 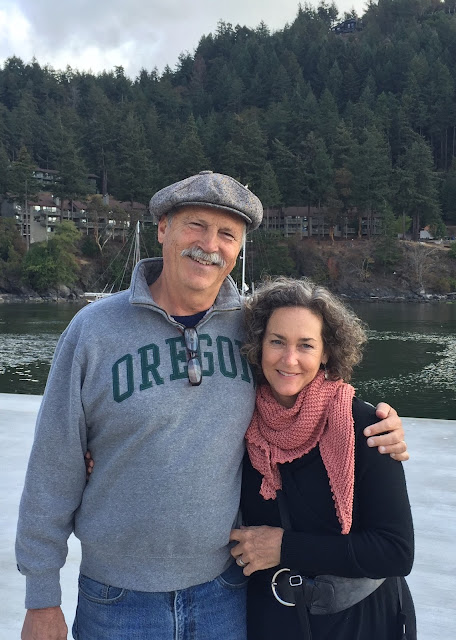 I chatted with the woman helping me about how bummed I was to miss knitting in the park with them. As I was leaving, she handed me one of their little I Knit In Public buttons, and in that simple gesture, something in me shifted. 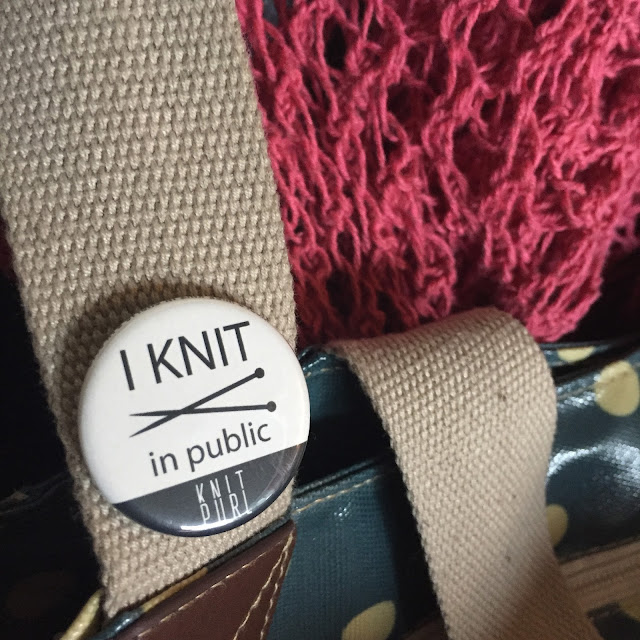 I stuck the button onto the handle of the big polkadot tote I use for a knitting bag (literally stuck it, eventually, with super glue, because I kept knocking it off), and started carrying the bag, and the knitting, almost everywhere I went. I'm still carrying it. Somehow, that button gave me permission to go forth and be a knitter, any time, and anywhere I want to.

I'm on a knitting rampage. I knit in restaurants and bars. I knit at the movies, while I wait for the lights to go down. I knit while I'm waiting for coffee, and given Portland's near-legendary "slow hipster service," that can be a considerable amount of time. I also knit when hanging out with friends, a glass of wine alongside for the social time. They ask me what I'm making and keep tabs on my progress. They're interested. And to my surprise, I don't feel like a weird old lady, but more like a somewhat fascinating, creatively driven person who's fortunate enough to be able to make stuff everywhere she goes.

What started out as a few minutes in the morning, when I ease into the day with some knitting meditation and tea, has settled in and become a big part of my days. Some "sit", I knit. In a lot of ways, it's the same thing. 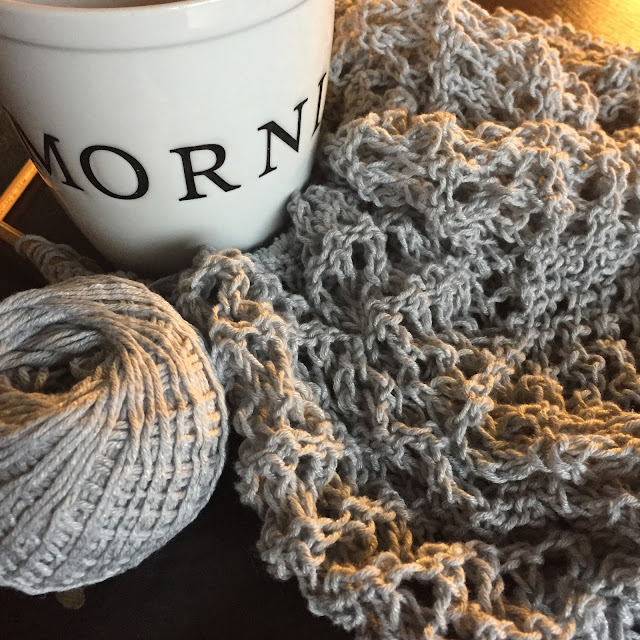 As a result of all this knitting, I'm accumulating more knitted objects than I really need - or have room for. The result of that is I've started selling a few things. I really don't have room for a new scarf every week or two, so selling them supports my very tasteful yarn habit, and also makes some of my non-knitter friends happy.

There's a lot of stuff in this world. Stores full of things, mostly made by machines. But there's something so increasingly rare and soulful and alive about handmade objects of any kind. With knits, and other things we wear on our bodies, handmade will always feel friendlier than machine made. Every stitch carries with it something of the maker, whether it's her (or his - men knit too) general personality or mood, or actual intentions worked energetically into the fabric. I do that sometimes, and I think putting Love, Gratitude, Balance, Joy, and Compassion into the stitches, one at a time, is something that can be felt by the wearer. Crazy maybe? I'm okay with that.

I think I want to keep sort of a knitting journal here on the blog. So from the beginning, the first scarf I sold was this one, made of baby-soft organic cotton. 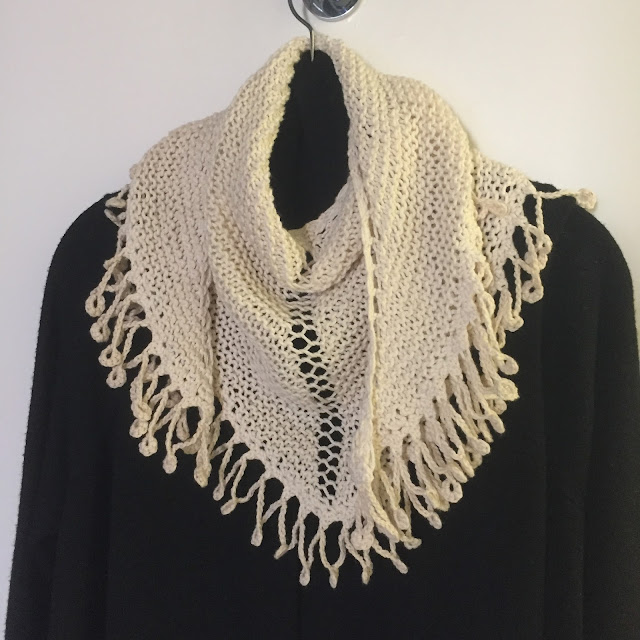 When I finished the pink one, made of a cotton-hemp-tencel blend, I wrapped it around my neck and said, Mine. 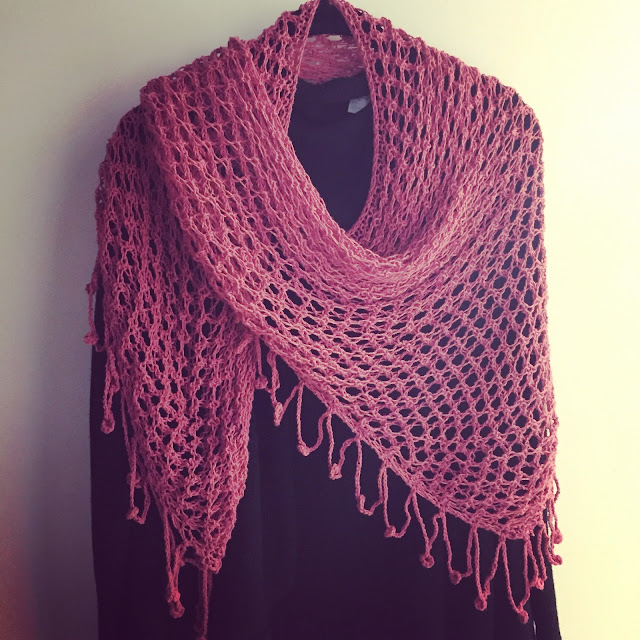 It's big and drapey and soft, and somehow seems to go with everything. I'm not a pink person, but this  shawl/scarf just speaks to me. It was really fun to make too, so I made another one, this time blue, and a fantastic blend of cotton and bamboo. I offered it in my little shop (I say little because so far, there's only one item in it at a time), and it was sold almost instantly. 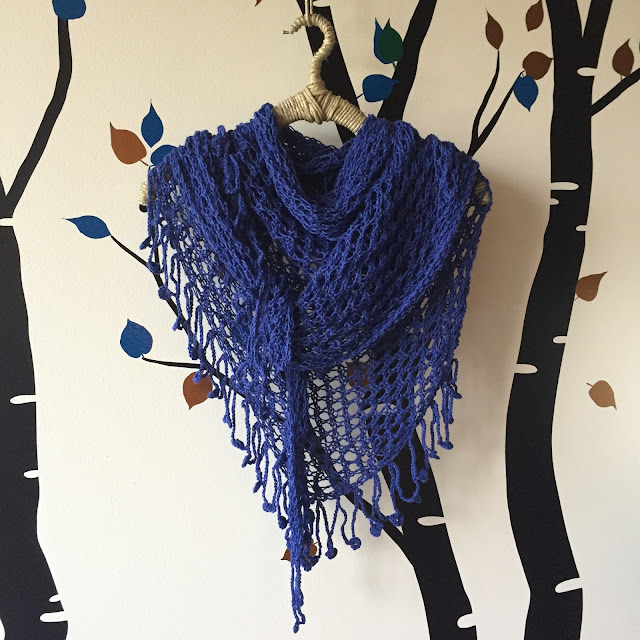 I had a hunch the handmadeness of these things I'm making would resonate with certain people. I'm happy that it does. It makes my reach in the world broader, and lets me share some of what brings me so much comfort and joy.

I've named this the Portlandia Shawl, because I imagine draping a gigantic one around the lovely and powerful Portlandia statue that's perched on the Portland Building downtown, reaching her hand down to those who pass below. (I know, you though it was just a TV show...) I walk by her often in my rounds, and I always stop and say hello. 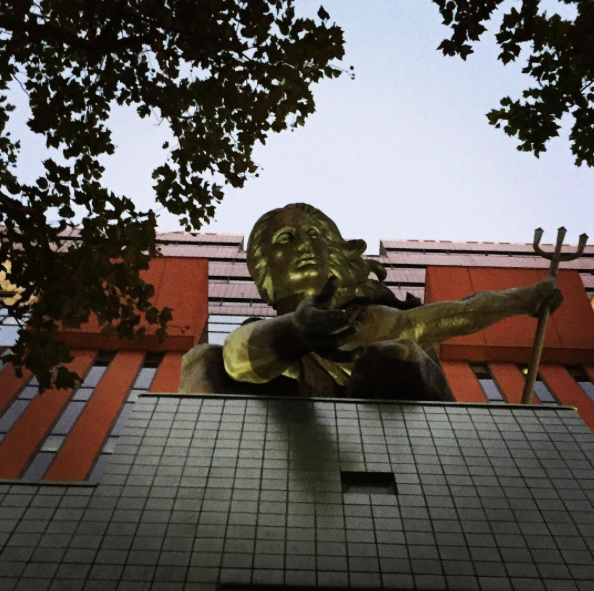 Next on the sticks is another Portlandia Shawl, the one shown above, next to my tea cup. It's the same cotton-bamboo yarn as the blue one, but this time a dreamy, soft dove gray. I hope I have enough yarn to make two of these, because I really want one for myself... and I really want to share one too.

A side note: In poking around for information on the statue, I discovered that her likeness is strictly copyrighted by the artist, which explains why she's not gone the way of other public art, such as the Statue of Liberty or the Eiffel Tower, turning up on everything from coffee mugs to refrigerator magnets. Portlandia is public art, paid for by public funds, but she is not allowed to become a public icon. Interesting. And I suppose I might have to change the name of the shawl design...

Gotta go now. I need to knit. Preferably in public.