- January 04, 2017
It's perfect that we're moving at the beginning of a new year, when we'd normally be considering a fresh round of sorting and clearing. We've been doing this downsizing thing for years, since 2008, when we went to Ethiopia (and came back different). And you know, we're getting pretty good at it.

I can't imagine ever upsizing again. Even though we're buying a house, the total square footage is only about 1,100, and it's divided into two units. So we'll actually be living in about the same amount of space we have now, in our studio apartment, in Portland. I find this quite amusing. Half a house for us, and half for our family and friends and Airbnb guests.

The closet Rick and I have been sharing is small. Too small for one regular person's wardrobe, but we've made it work. Sort of. OK - I've been grumbling about wanting more space lately. But after watching Minimalism (highly recommended by me) on Netflix, I was inspired to give my half of the closet another good clearing. It had gotten crowded with city girl clothes I thought I needed. Truth is, I really only wear a few favorite things most of the time, and there were quite a few items in there I'd either never worn, or really didn't like at all.

Here's the Before. I know, it's not a lot to begin with. But once it was all barfed out onto the bed, it became clear that there were some really silly stowaways in there. (Did I really buy a bright green dress???) 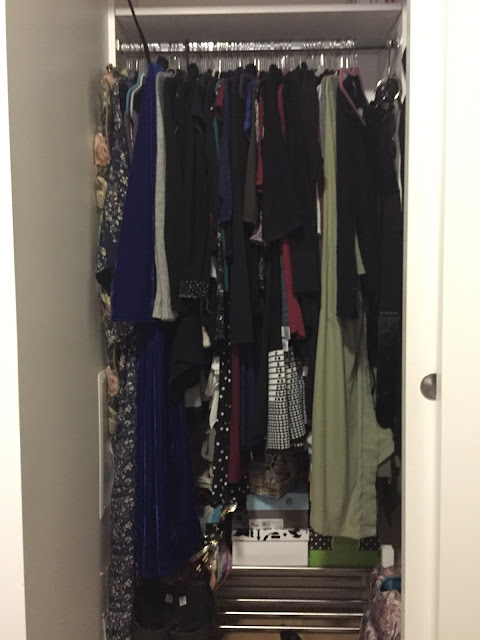 Why do I still make these shopping mistakes? Oh hell. Who knows? We all mess up and fumble through and make silly impulse buys under stress or when we think a thing will bring us comfort. I'm surprised my apartment isn'y packed to the ceiling with dumb things I don't need, after the year i just had. But back to the closet...

Because I've been practicing, and because I actually enjoy letting go of things that aren't useful to me, the process only took about an hour this morning. Standing there in my slip, I took each piece out of the closet, one by one. If I wasn't sure about something, I tried it on. Piece by piece, I made three piles on the bed. The Now pile, the Later pile, and the Give Away pile, which actually went directly into a big black bag, so I wouldn't go back and second guess my tossing decisions. The three piles came out about even, though maybe leaning a little heavier on Give Away. If I haven't worn it in a year, I'm not likely to ever wear it. And if a favorite is worn out, it's time to replace it.

In progress here - That crazy purse was fun for my stint at Portland Fashion Week over a year ago, but now it needs a new home. 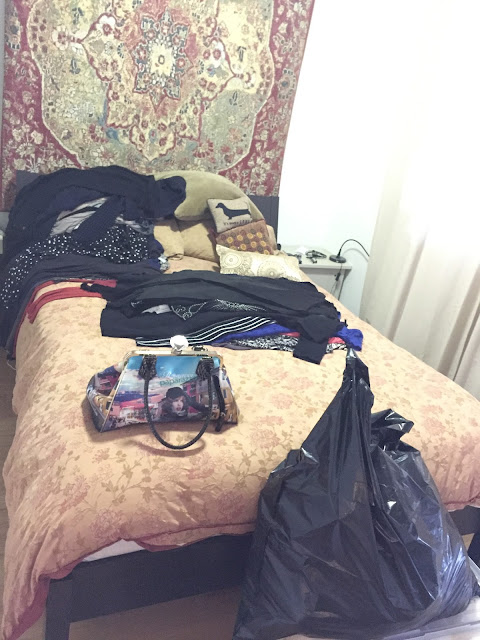 The reality of my personal "style," which admittedly is not all that stylish, is that I prefer dresses, leggings, boots, and long cardigans over anything else. I have seven dresses that are sort of a uniform for me, all from PrAna or Horney Toad, and all but one in solid colors. They work with the climate here, they're comfortable, and they can be dressed up a bit with scarves and jewelry. I have one pair of black boots on their third winter, and looking more and more like pirate boots than sassy city footwear. I also have about 20 other pairs of shoes that I'm stubbornly keeping. I like shoes and purses, and I try to let something go whenever I bring a new accessory  in. They're gaining on me, and I'll deal with them later, once I know for sure which ones aren't fitting in with my new beachy lifestyle.

Just about done. The Later clothes are in the box, so I can see them if I go looking for them. The Give Away bag grew after this picture, with the addition of two coats and a pair of shoes that hurt. No pain in my closet! 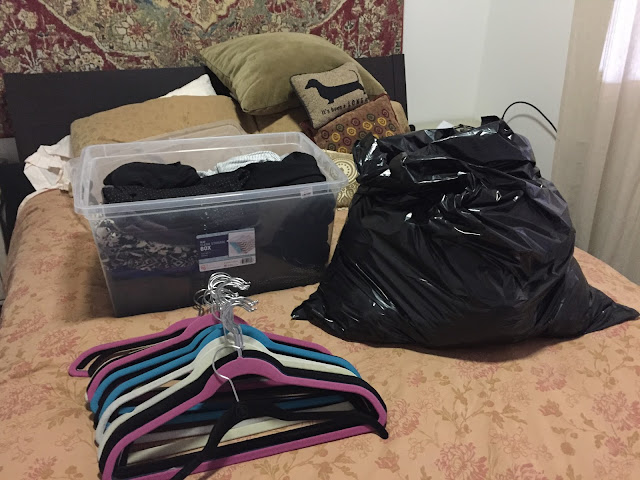 And here's the final cut, now in the closet and ready to pack and move next week. It's not much, but it's all I need. Actually, the tapestry garment bag on the left will also go in storage for a while. Fancy dresses for weddings and parties are in there. I even have room for my coats now. And notice, no jeans. I hate them and I refuse to wear them. You can't make me. 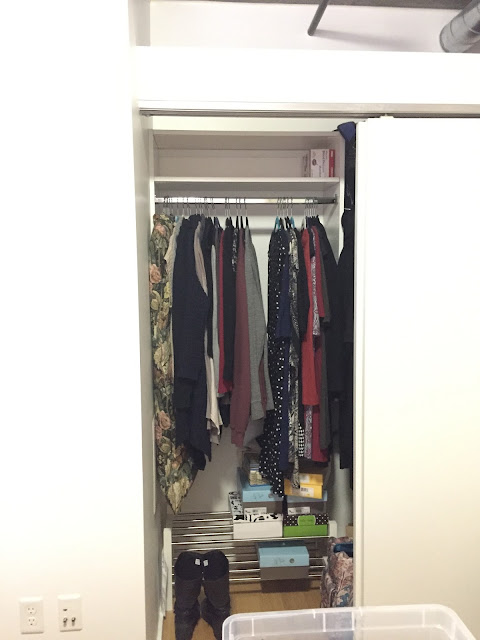