We're Moving to the Beach

- January 01, 2017
When we moved from Taos to Portland, the intention was to "date" our new city for a year, and see if it was a good match. A year turned into two, and because we still needed to be in easy reach of family in both Seattle and California, we renewed the lease on our studio apartment for a third year last spring.

After about the first year though, we could tell that we didn't want to marry Portland. Lovely as she is, we began to grow weary of the pace and chaos of city living. We started driving to the coast as often as we could. Every time we were there, we'd ask ourselves, Why don't we live here??? The answer was always the same. The beach is too far from the airport, which I needed for my frequent trips to visit my dad, and it's too expensive to live there.

We sort of believed our story, and we'd go back to Portland with sandy feet, a bag of beach rocks to crochet, and a longing in our hearts. A few months ago, I stuck a map of the Oregon coast on our bathroom wall, along with a picture of the beach, on which I wrote, We are here... Something in me also believed in the possibility of living on the coast some day. 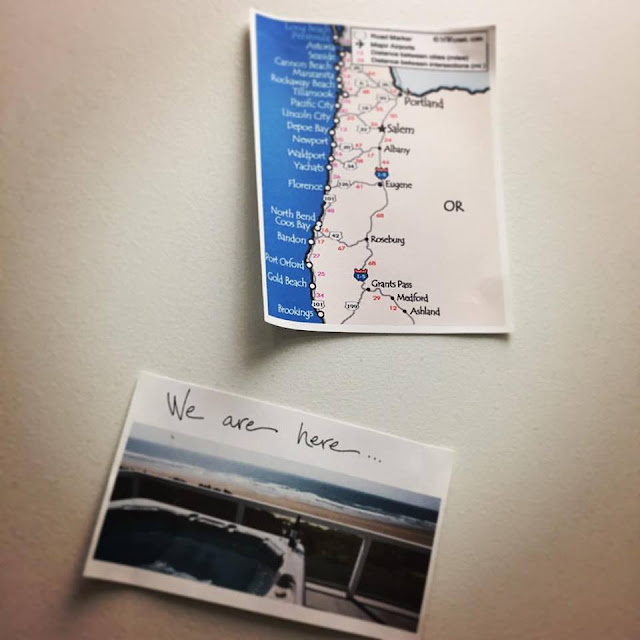 And then my father passed from this world. After two years of being there so often, and for such long stretches of time, suddenly I had no more reason to go to California, and no real need of an airport. And along with that, in Daddy's typically protective way of providing for his girls, he left us with a house to sell. All of a sudden, living at the beach became a real possibility for me.

Several months before his passing, Dad was talking about how amazed he was that his humble tract house, bought over 50 years ago, had increased in value beyond anything he could ever have imagined. He was so proud and happy to be giving that to us. It was a strange conversation to be having. I was uncomfortable, but rather than dismiss his gift because getting it would mean losing him, I chose to honor his lifelong efforts and his love for his daughters by telling him what I planned to do with my inheritance. I'm so glad I did.

The idea of buying a house was the best way I could think of to protect my money from myself. Buying a house at the beach seemed like the perfect way to be practical and also to have something the whole family could enjoy. Daddy approved. And I know he'd be pleased and amazed all over again to see how a part of the house he and Mom raised their family in has almost magically become another house for the family to love.

The hole in my heart will always be there, but more and more it's filling with light. Rick and I have bought our little house in Seaside, Oregon, and we'll be moving in this month. Portland was a great date, but now I really feel like we're heading for home. Thank you, Daddy. Thank you, 2017. I think everything is going to be so much more than OK.