How Can So Much Happen in One Little Month?

- April 30, 2017
In early April we finally got access to our rental unit. To quickly catch you up if you need it, we bought a sweet little duplex in Seaside, Oregon in December, and moved in during one of January's most inconvenient snow storms in Portland. We set up camp in the back unit, and fixed it up while we waited for the tenants up front to come to the end of their lease. Now that it's all ours, the plan is to fix up the other little 500 square foot apartment to be used as guest space for friends and family, and also as income property in the form of a vacation rental.

As we set out to get the proper permits for our VRD (Vacation Rental Dwelling), we learned that the codes and standards for Airbnb type rentals are much stricter than for regular full-time leased rentals. There have been way more expensive surprises than we'd imagined, and we actually did figure on some. We didn't know we would have to replace two electrical panels and move one to another room. We didn't know our galvanized pipe was dissolving. We didn't know that every wall that need to be opened was "sheetrocked" with plywood. And we didn't know that every project, once started, would create several accessory projects that couldn't be avoided.

Rick got the flu just as we started all this, so he was miserably huddled up in bed for a week while I wrangled workers and got kind of comfortable playing crew boss. By the time he was back on his feet, a lot of the work had been completed, but there was still a lot more to do. The two guys we had hired to help Rick actually ended up doing more than we'd planned on. They were pretty good, but not super professional as handymen. We dubbed them "the Darryls," after the guys from the old Bob Newhart show - Larry, his brother Darryl, and his other brother Darryl... They bickered like an old married couple, and went round and round about how various things should be done. Eventually they muddled through to a point where Rick could take over, and we let them go after they spent an afternoon trying to sort out how to cut the angles in the crown moulding. They never did figure it out. 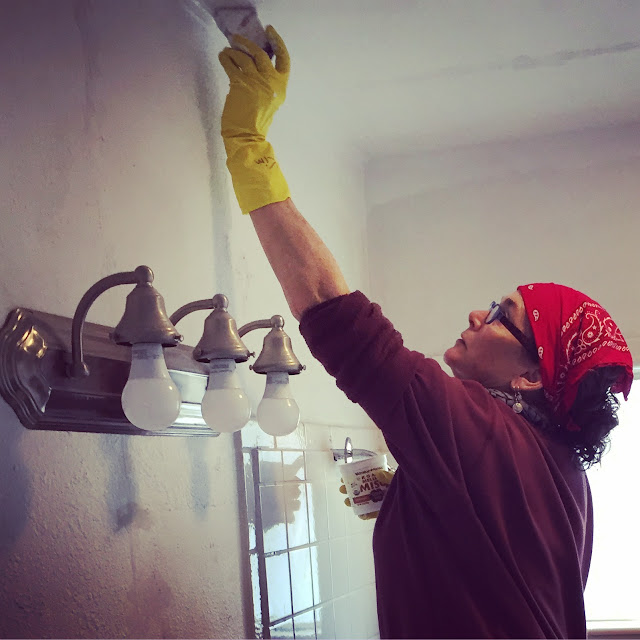 Now we're down to taping, texturing, and painting (my most unfavorite thing that I happen to be very good at), and final visits from the plumber, electrician, and inspectors. It's been intense, but at least it's all moved along pretty quickly. And because I wasn't doing most of the work (until the painting), I've had lots of time for Making Things.

All of the things I'll show you were made during the month of April. I also whipped out three nice hats, made from handspun yarn a new friend gifted me with. I am in a making stuff frenzy, which I actually credit directly to the chaos going on around me. It's sort of a call and response type of thing. Chaos and Creativity are a great team.

It's time to update my website and start sharing some of my new projects. On a small scale (not walls), I enjoy painting quite a lot. It's impossible for me to see a perfect sand dollar on the beach and not pick it up. At the moment I have about 75 of them sunning themselves in the backyard. On a rainy day just before Easter, I picked up a paintbrush and turned a big batch of sand dollars into colorful little works of art. When I figure out how to mail them, I'll offer some for sale. 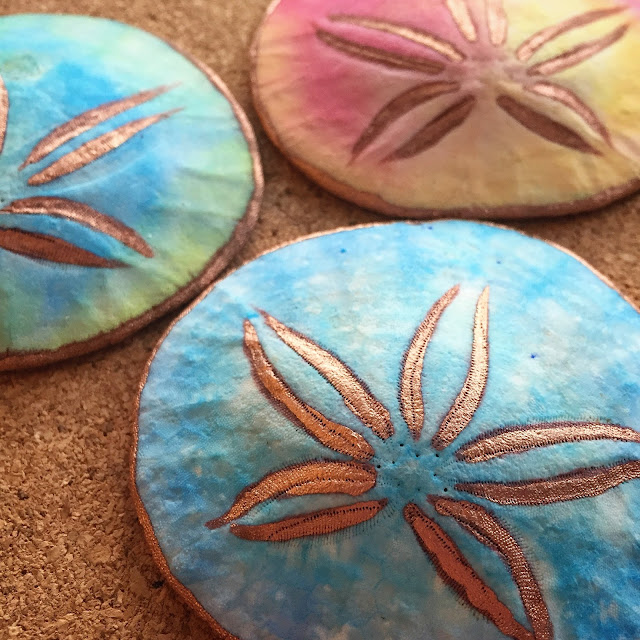 I'm also kind of obsessively making crocheted lampshades. I think it's pretty funny that years ago, when I told someone we were moving to Taos, she got a very knowing look on her face and asked, "Are you a Lightworker?" I had no idea what that even meant at the time, but following the thread, I was a beadmaker at the time - also known as a "lampworker". Now I make actual lamps, and yes, my goal, after all, is to bring more light to the world, both literally, as in with lightbulbs, and also in the more "woowoo" way of simply shining my own little light as much as I can in hopes of raising the vibe a bit. In answer to that long ago question, yes, I suppose I am a Lightworker - in lots of ways. And again, when I figure out how to ship them, I'll offer these beauties for sale too. 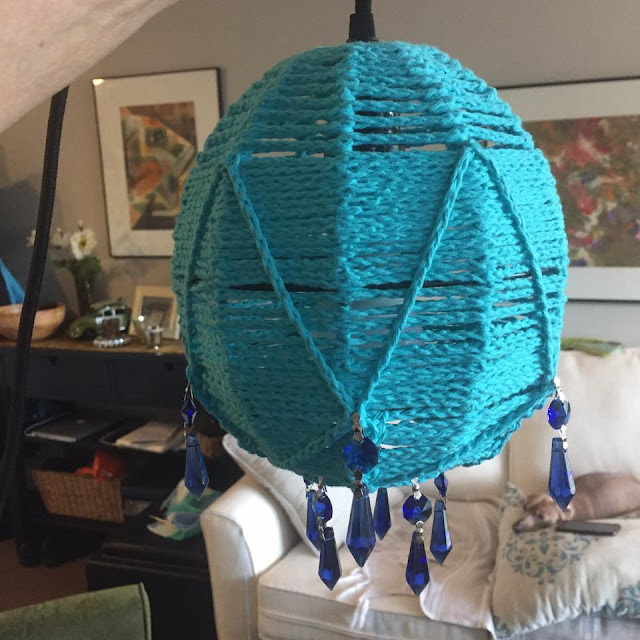 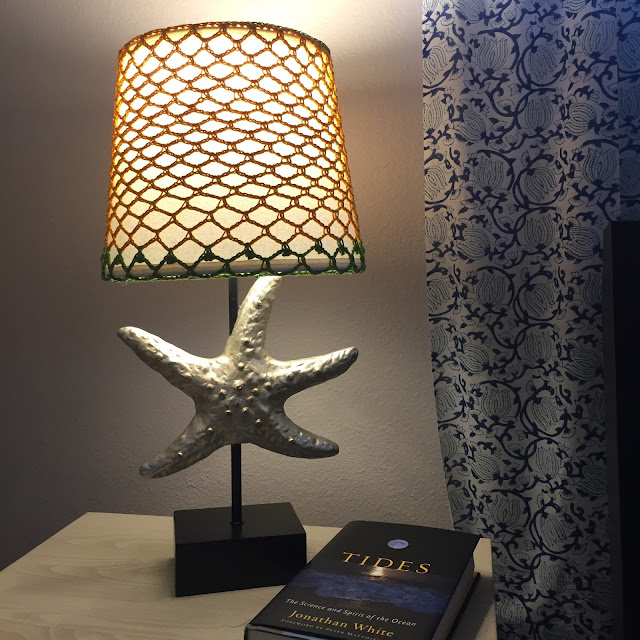 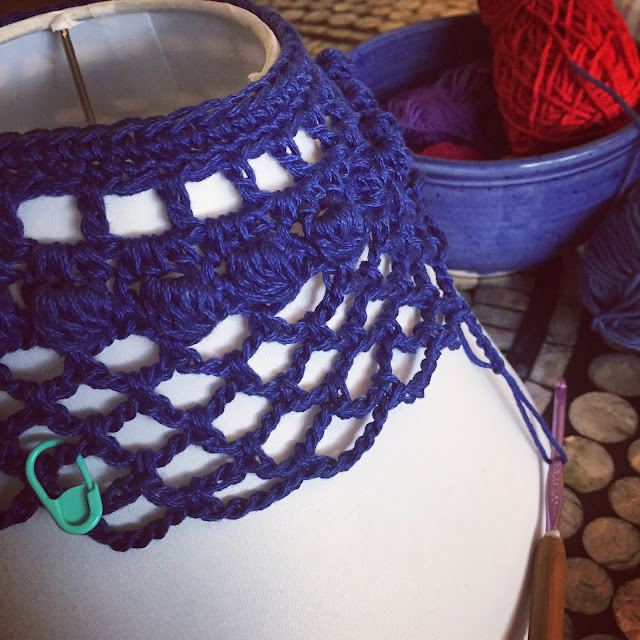 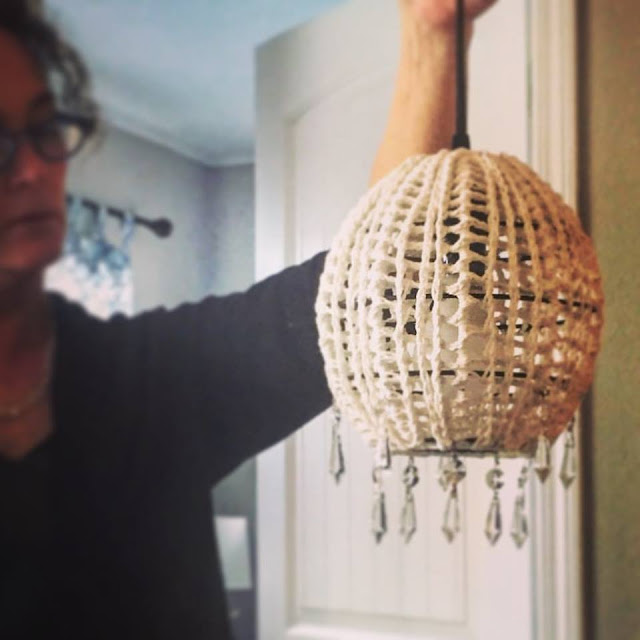 After I ran out of lampshades, I turned to earrings. I'm going to San Francisco in a couple of weeks, to walk across the Golden Gate Bridge with my uncle, in celebration of both his and the bridge's 80th birthdays in May. This summer is also the 50th anniversary of the summer of Love in San Francisco, and I think these earrings are a perfect fit. More in the works! You can never have too many earrings. Never. 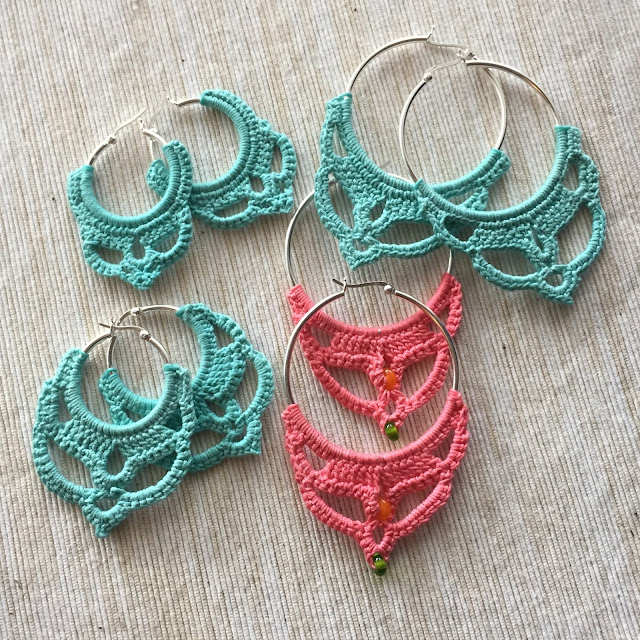 I really don't know where this last bit of inspiration came from. I'm not really a doll person. I don't own any, and the few I saved from my little girl years were handed off to my daughter long ago. For some reason though, these soft and simple mermaid dolls want to be made. Obediently, and to my own surprised delight, I am making them. Here are the first two, who have already been adopted. 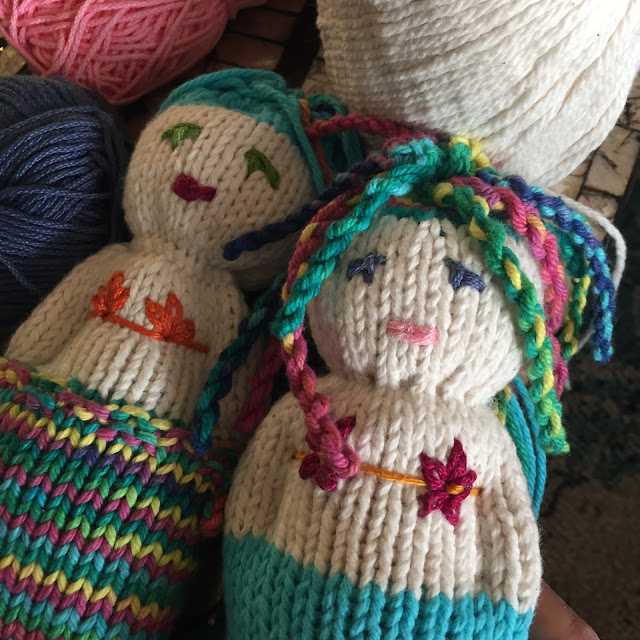 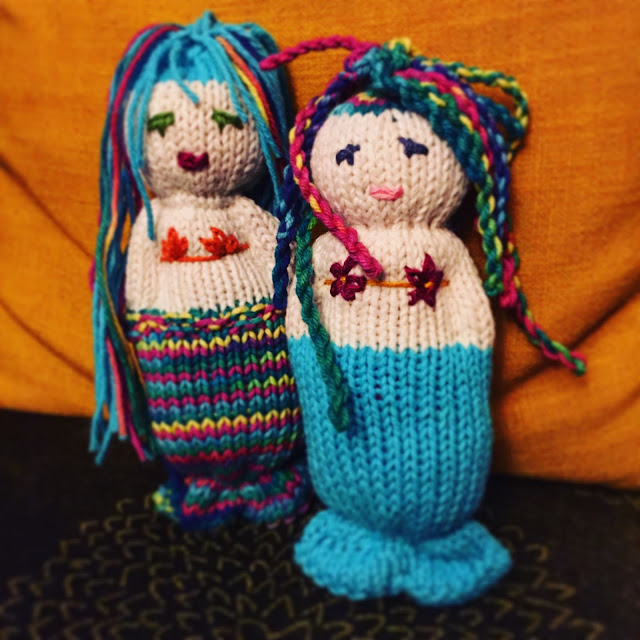 Tinkering with the idea a little more, and following all leads from the dolls themselves, this is the third one. I adore making the hair. Isn't life pretty much all about the hair? 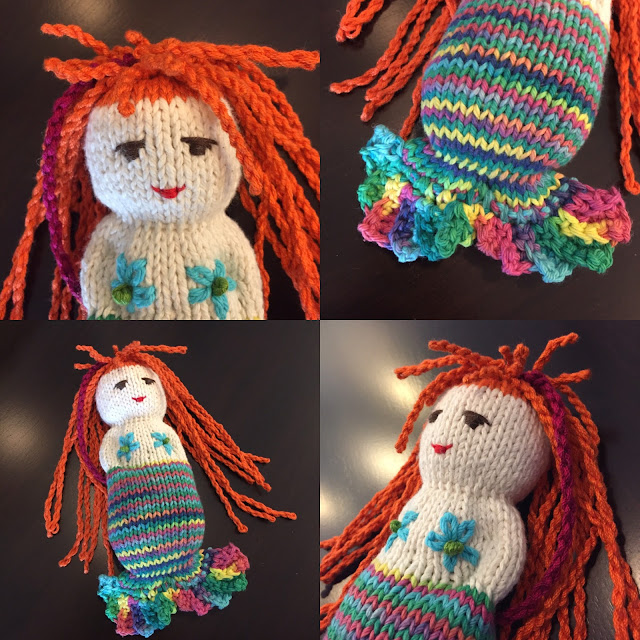 She has a home too, but I think I'll be making more, and yes, I'll offer them for sale, on my website, along with all the other new things.

That was April. Maybe I'll name this doll April, in honor of the whole flurry of a month. Writing all this down, I'm absolutely and humbly amazed at all that's sifted through my world in just four little weeks. I'm looking forward to May, but first I think I need to rest a minute.