- December 28, 2017
In November of 2008, Rick and I went to Africa for three weeks, as volunteers for the Hope Bracelet Project, at Project Mercy, in Yetebon, Ethiopia. Our main task was to continue the beadmaking education of the young artisans there. While that in itself was a life changing experience for us, there are other memories that surface for me now, and give new value and meaning to our time there. 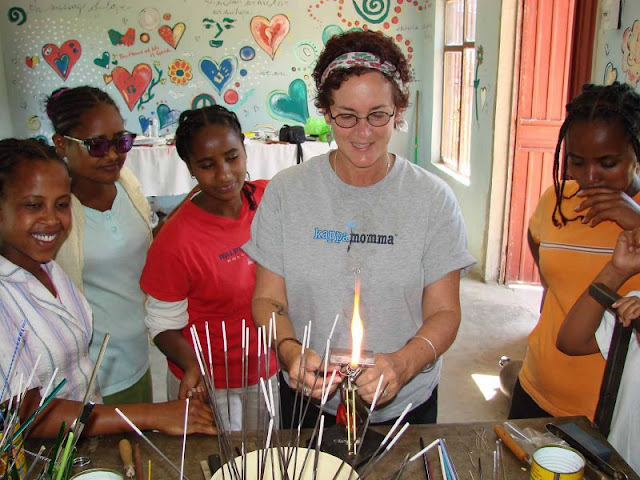 One of the fun things our group of volunteers did was to teach the children who lived in the compound how to knit. We brought needles and yarn to share and to leave there, and sat outside in the soft November sunshine, surrounded by eager little boys and girls who sat as close to us as they could get, and did their best to learn through our clumsy, mimed instructions.

A few of the local women also joined us. No one had their own project to work on, and so each of the starter pieces was passed around, so anyone who wanted to knit could take a turn. I had also brought along my own large wool bag project, which I was planning to felt after knitting. That too was gently reached for by the other women, and passed from hand to hand, as each took her turn and added her own stitches to what I had thought was "my" work. 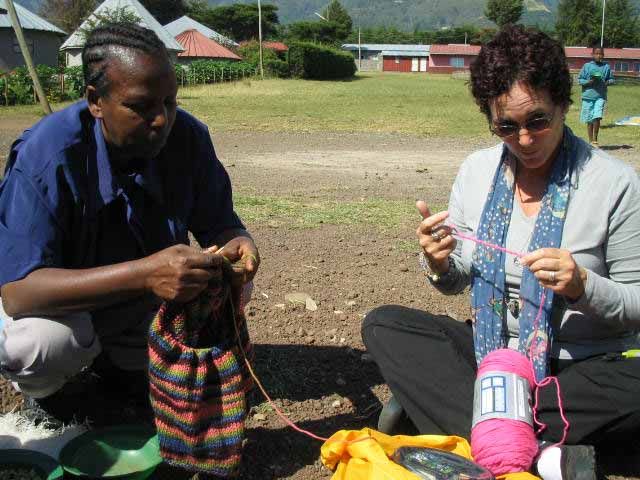 The knitting of the bag went on for several days. I had it with me everywhere I went, and everyone who knew how to knit spent time with it, from the house mom in the dormitory to Marta, the earth-angel founder of Project Mercy. The knitting was finished while we were still there, but there was no washing machine to felt it in. 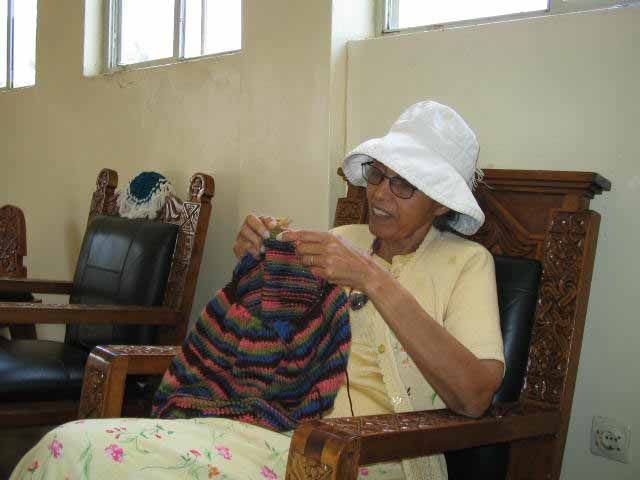 Once a week all of the compound's laundry was gathered up and washed by the Laundry Man, by hand (I'm assuming he had helpers), and then hung up to dry in the sun, and later neatly folded and returned to each person's doorstep. Laundry by hand? This got me thinking. Since the bag itself was made by hand - by so many hands, as it turned out, why not do the felting by hand too? Yes, it would be a lot of work, but I knew there would be willing helpers to join me. Not because they had to, but because it would be fun. 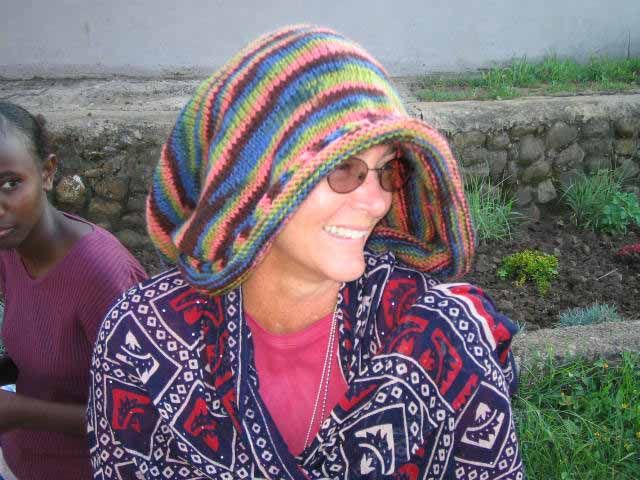 I asked around for a large plastic tub, which three of our beadmakers found for me. We set it outside the small but modern "tukul" we were staying in, and Rick brought buckets of hot water from the shower out to fill the tub. The beadmakers, all in their late teens or early 20's, instantly became felting assistants. Everything in their world is a community activity, so there was never a question that they would help. When there's something to do, everyone does it. 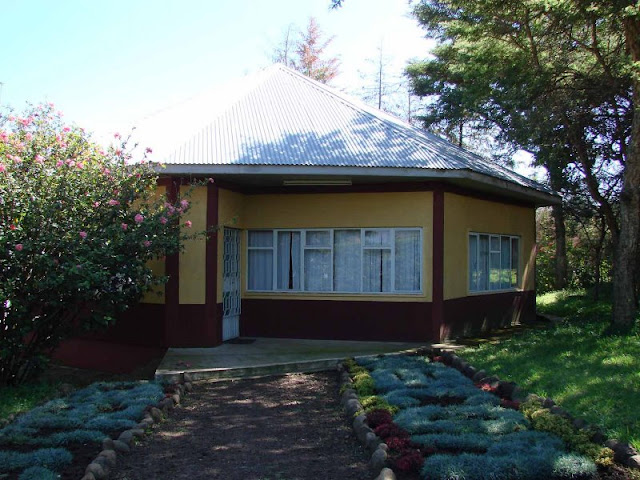 The four of us plunged our eight hands into the hot water with the bag, and started scrubbing and rubbing the fabric against itself, coaxing fuzz from the fibers, splashing water all over ourselves, laughing a lot, and chatting the best we could. The "kids" knew a fair amount of English, and were hungry to learn about life in our world. Worlds connected over that tub of water, distances and differences grew smaller, and what would have been work if I'd been alone became play in the company of new friends. 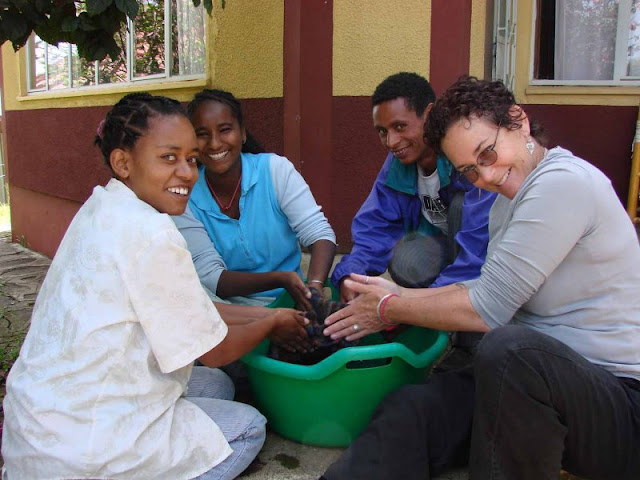 Rick brought more water as we needed it, and before too long, we had a densely felted, beautiful bag to show for our efforts. I turned it upside down over a fence post to dry, and the next day, proudly shared it with our fellow volunteers, and all of the people who had worked on it. This was no longer my bag. It belonged to all of us... although I was the one who took it home. 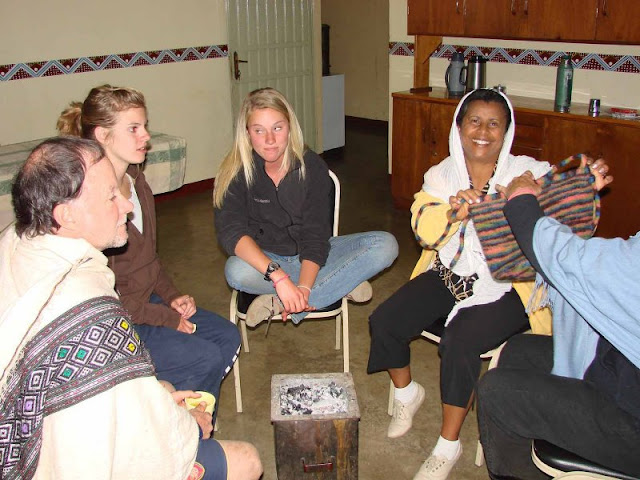 I still have the Many Hands Bag. I treasure it because it carries the energy, care, and enthusiasm of everyone who helped to make it. It reminds me of what I wish for the world - that we somehow remember that we share one world, that life is a community activity, and that if we spent more time working together and helping each other in small ways, things might be a whole lot better for all of us. 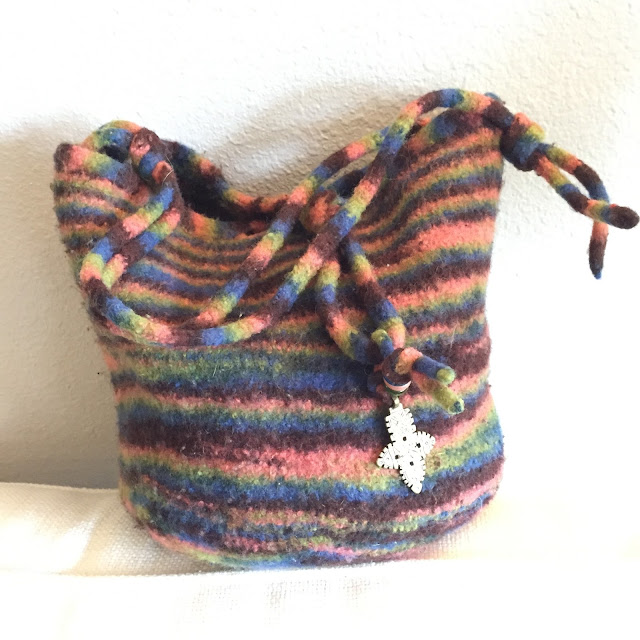 So now my question is, could a project like this work here? Maybe a group of people working together on something simple, like maybe scarves and/or hats, to be donated to shelters or hospitals or food banks? Someone would start, let's say a scarf, because it can be so simple even beginners can work on it. The starter person would keep it for a few days, and then pass it on to the next person, who would pass it along again after a few days. Completion anxiety and project boredom wouldn't be a problem, since nobody would have to spend a lot of time on it. And in an in-person get together, a group could just pass the scarf around the room every ten minutes or so.

I don't know. It's just a seedling idea. But maybe it would be fun, and maybe it would do more than just produce a scarf or a hat. Does this speak to you in any way? Leave your comments below. I'd kind of like to explore this some more.