knitting (and drinking) in public 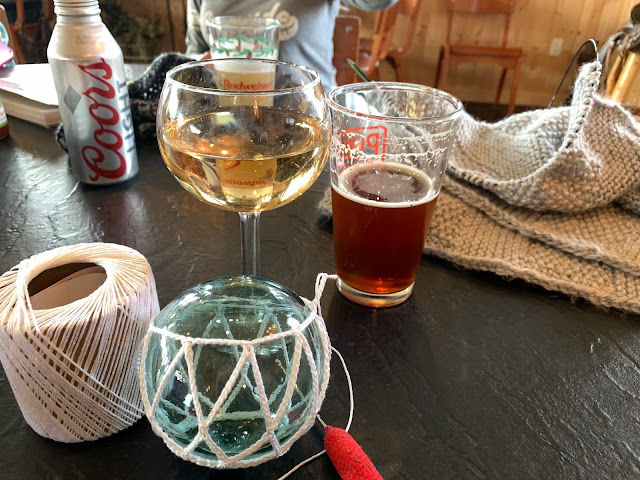 Our little knitting group is still going strong after a year or so of regular Tuesday knit-togethers. Until recently, we've been meeting at coffee places. Starbucks was nice, except that they played the music so loud we couldn't hear each other talk. Nothing more fun than a group of people over 50 all yelling, "Huh?! What?! What is this music???" Not so good for our attempts to not look like a bunch of old farts playing with sticks and string.

We tried bouncing back and forth between two little privately owned places nearby, that just happened to be right across the street from each other. After a while though, as the cafe owners began to feel more comfortable around us, the vibe shifted. They both became more and more open about the vicious and unprofessional rivalry between the two of them. The verbal shrapnel-flinging was fierce and frequent, and it became so ugly and awkward, we felt the need to wander off in search of a safer place to spend our time and money.

One previous meeting place had been the Seaside Golf Course. We liked it. Sort of. It's in walking distance for most of us, the lighting is good, and there's lots of seating and friendly service. What we didn't like was being stuck in the back dining room. When we'd asked if they could accommodate a weekly group, they happily set us up in a quiet part of the restaurant that could hold a lot of people. It was nice of them, but it was boring. If we wanted a private space, we'd just go to someone's house.

Since we were running out of options, we reconsidered the golf course, only this time, we didn't ask for permission or special consideration of any kind. We just showed up. And not in the restaurant. We headed straight for the bar.

There are really only 5 or 6 of us who always go, so it's easy to fit around any of their several large tables. We meet after the lunch rush, so they aren't too busy, and we're really pretty low maintenance. Drinks and fries are about all we need, and we always over-tip. That's important when you want to hang out for a couple of hours in a public place, but not order a lot of food.

I was a little worried that some of our regulars would object to meeting in a bar, but as it turns out, all of us would prefer a tasty adult beverage over a cappuccino or a cup of tea. Funny! I think it's good for our "cool knitters" image too. Nothing prissy about this group. We knit, we laugh, we drink, and we do it all in public.

We have so much fun, there are a couple of people who like to join us even though they don't knit. We don't care! In fact, we're thinking of changing our name. It's been Seaside Social Knitters all along (SSK is also a knitting term, for those who don't know), but yesterday someone jokingly tossed out, "Knit Or Not." I think that suits us just fine.

Knit Or Not meets every Tuesday at the Seaside Golf Course, in the bar, from 1-3PM. Join us if you want to!