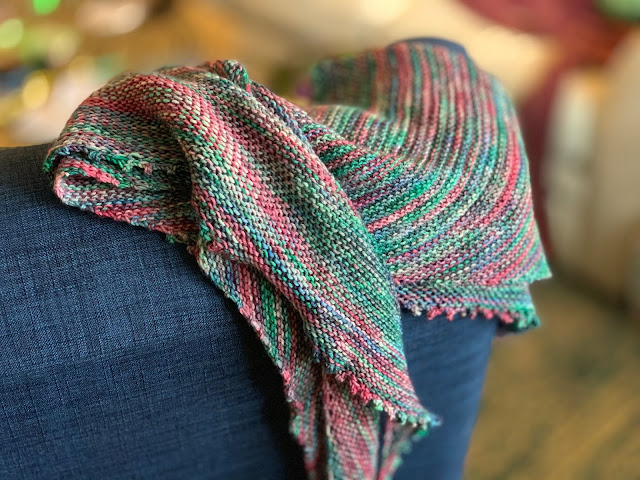 For some time now, Rick and I, along with a few other friends, have been knitting and crocheting prayer shawls, also known as comfort shawls, for the local hospital.

We make the shawls out of washable yarn, usually acrylic, and then hand them over to be laundered in the hospital before being distributed. It worked well until the hospital updated its laundry protocol, and decided that even our shawls would now need to be bleached.

Hours and hours of work go into each and every shawl. We knew they were already being washed in super hot water and going through the hottest dryers. Although all that heat and sloshing is not ideal for hand knit items, the yarn was standing up to the torture well enough. Bleach, on the other hand, would not only fade the colors in the yarn, but also deteriorate the fibers. So after much discussion, and research into alternative yarns we might use, we decided as a group to put the project on hold.

It's okay. I think some of us needed a break, and to be honest, I don't love working with huge amounts of acrylic yarn for hours and hours, when I have perfectly lovely yarns waiting patiently by. I've become a yarn snob, and I'm willing to own that.

Something happened last week that gave our group a new look at the project. A friend of all of ours found out that she is quite ill, and it's not the first time. She's worried and scared, of course, but to make it even worse, she also found out that her daughter has major health problems to face. It's too much. It's not fair. It totally sucks. And there's not much friends can do but be supportive and show up when they're needed.

As knitters, we realized we can show up in a way most people can't. We can make something for her. So someone came up with a great idea - for me to make her a shawl.

Fortunately, I already had a beautiful scarf almost finished. Even though I had planned to keep it for myself, I knew it was perfect for our friend, so I agreed to donate it to the cause, if every person in the group would knit at least one stitch into it.

They wanted to give me money, which was perfectly nice, especially since I was using favorite, fancy hand-dyed yarn from CandySkein for this project. But money wasn't the point. In order for it to be from all of us, we all had to work on it. So I continued to insist that everyone add a stitch.

There was resistance, more insistence, more resistance. And then I sat up really straight, got a little bit stern, and told them that their participation was very important to me. I was not backing down.

Eventually, of course, I got my way.

As we passed the scarf around the table, and each knitter took their turn, something shifted. The work became ours. As small as the one-stitch gesture was, it mattered, and it was noticeable.

I did the finish work and brought it back this week for everyone to hold once more before wrapping it up and passing it to the one who wanted to deliver it to our friend. As we each signed the card, I made sure to mention in it that we had all worked on this together. She'll know I did most of it, but that doesn't matter. She'll also know we all had a hand in it, and we all care about her. 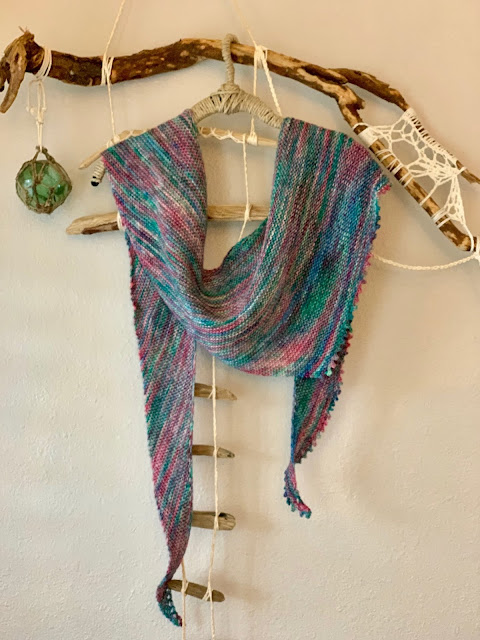 So it looks like prayer shawls are still going to happen. Only now they'll be in the form of fashionable, wearable scarves, and now we'll make them this way, as a group, for people we know. We'll also have the freedom to make them out of beautiful yarns that we'll enjoy handling, and wearers will actually enjoy wearing.

Handwork has a powerful energy, and things made by and for people who know and care about each other carry some pretty good juju.