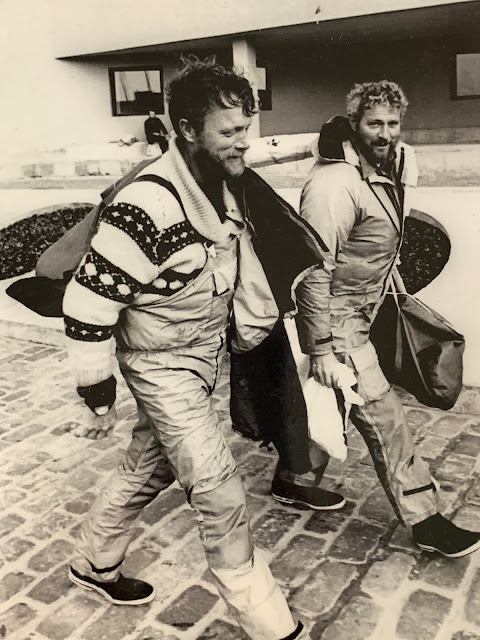 It all started with a picture. A few months ago, my grandson’s great grandfather on his dad’s side gave me this picture of himself wearing a beautiful hand knit Cowichan sweater that his mother had made for him. The photo was taken in 1979, in Tallinn, Estonia, where he was practicing for the Olympics. They are a family of sailors who have been competing - and winning - for three generations that I know of.

Grandpa Bill was well known for his sweaters. He told me that when his competitors saw him in one of these bulky, hand knit, water-holding beauties, they knew they were in trouble because the extra weight from a wet sweater gave him an advantage.

I know next to nothing about racing sailboats, but I do know a little bit about knitting. When Bill learned this, we made a nice connection and he told me stories of his mother and of his family history. When he gave me this picture, I knew I wanted to try to recreate his sweater for his great grandson. 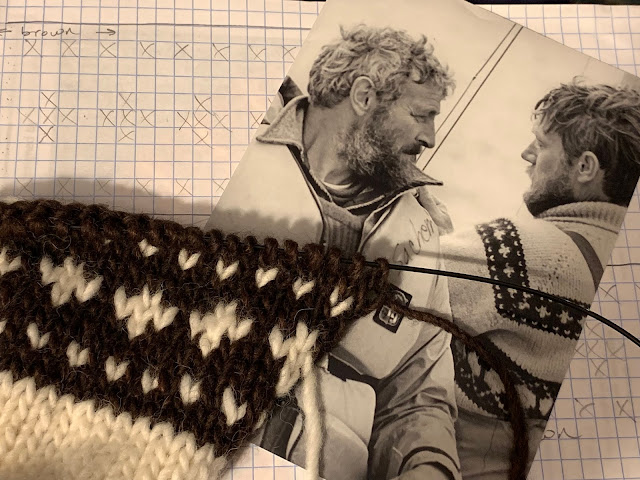 Without telling anyone in the family what I was doing, I got out some graph paper, and peered through a magnifying glass at the picture, counting stitches and creating a chart to match the design. Once I had that in place, I ordered yarn, watched a few YouTubes, consulted knitting friends, and taught myself how to do this style of color work the best I could. 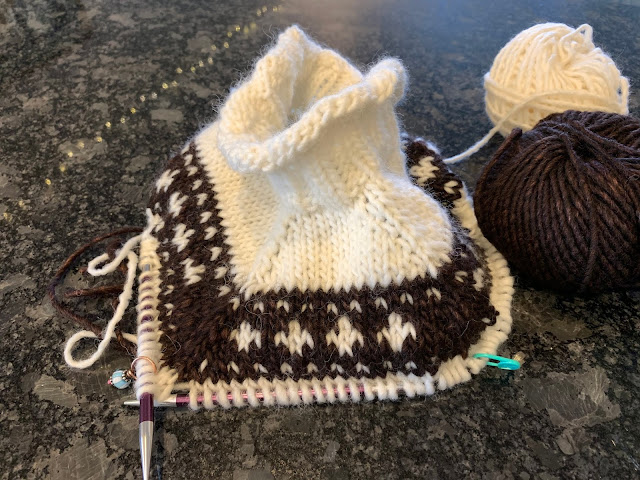 My first attempt at the yoke was not very good. The pattern didn’t match up and I wasn’t sure how to maintain the design while adding the corner increases. I tried to convince myself that it was good enough, but eventually ripped it out and started over. A lot of math, and some re-charting later, I began again, this time with much better results. 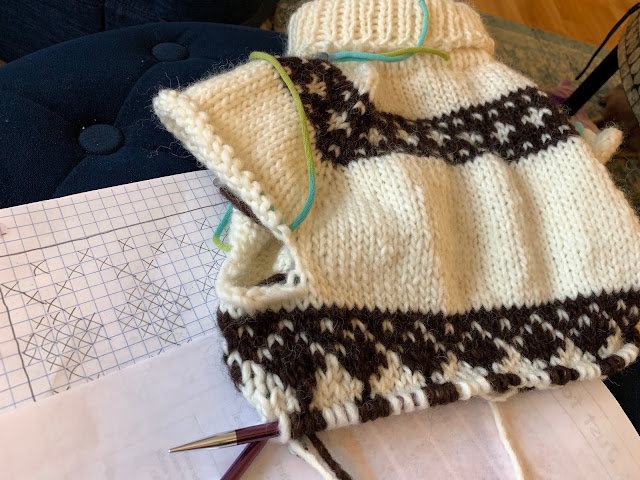 The yarn I used was not the traditional handspun wool used in real Cowichan sweaters. I ordered Tahki Yarns Arlington in the colors 01-white, and 03-chocolate. It's a soft, bulky blend of merino, alpaca, and acrylic. The pattern is adapted from Stripes Just For Me, by Deb Gemmell and Lynda Gemmell.

Finishing the yoke was the scariest part. Once I got through that, I knew I could manage the rest of it. The sleeves were a little tricky, because I wanted to knit them in the round, but not on DPNs or magic loop. The color work was tricky enough for me as a first-timer. I just didn't want to wrangle extra needles and cables. I finally found a set of interchangeable circular needles in the right size, and with a nice short, sleeve-size 9 inch cable from Love2Knit on Amazon. (There are no affiliate links in this post.) 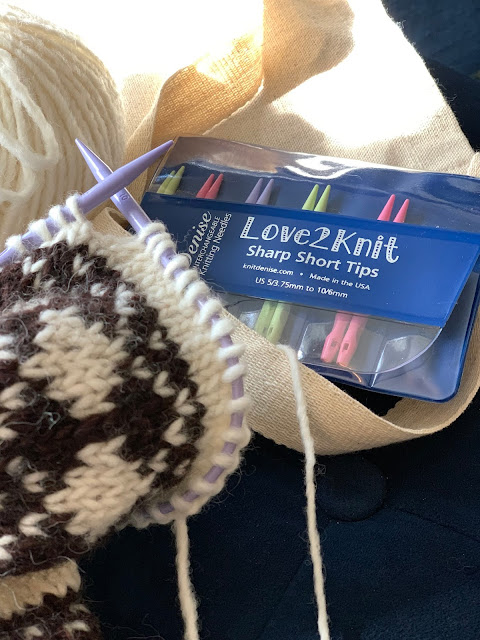 I finished it, and showed it off to friends (and strangers) here at home, but still kept it a secret from my daughter and her inlaws. I wanted to give it to Miles, as a first birthday present, at a big family party in early June. It was torture keeping my mouth shut about it, but I'm good at keeping secrets - even my own. 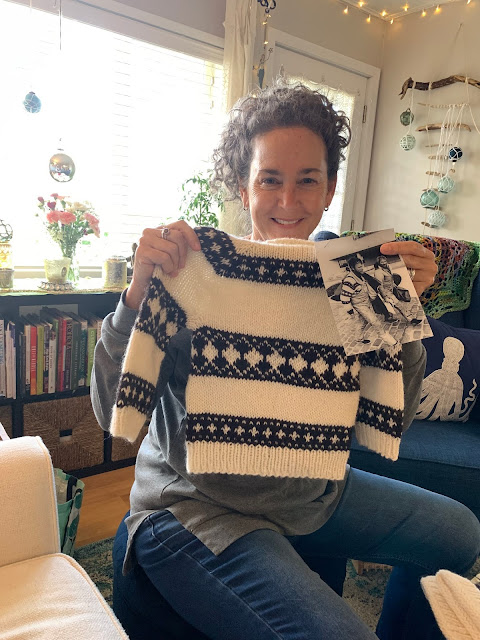 Since I finished it a full month before the party, I decided to also make some hats to match. One for Miles, one for his cousin, Connor, and one, of course, for Grandpa Bill. These were easy! 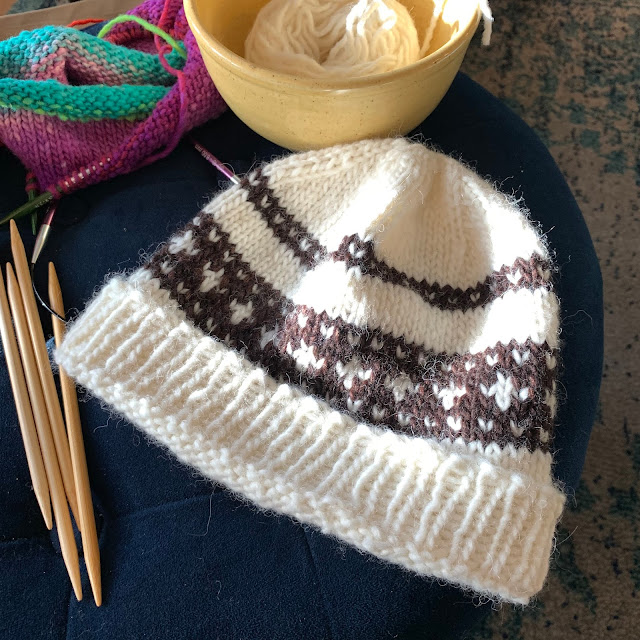 Party day finally arrived last weekend, much to my relief. I waited until everyone was there, and then got some help rounding up the key people. As my daughter helped Miles open the sweater, her look of surprise made all the secret-keeping worth it. There were some exclamations of, "You made that???" - which always kind of annoys me - and Grandpa Bill gave me a look from across the table that melted my heart. Success! I did it! 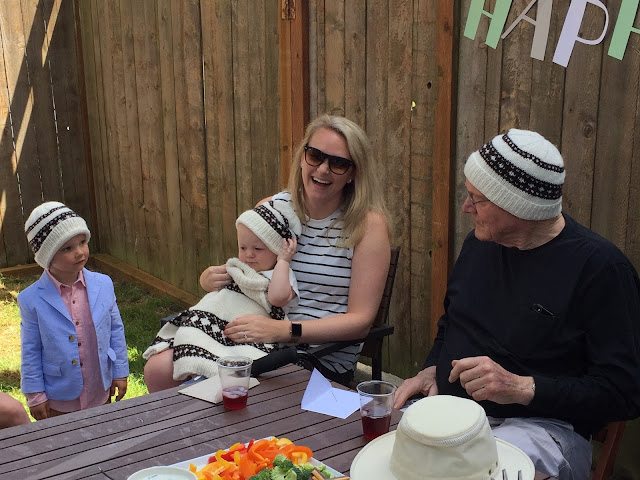 I was also glad to see that I'd made the sweater too-big enough that it will probably get two winters of use. This year it will be super big, but cuddly and warm. And next year, it might fit him just right. 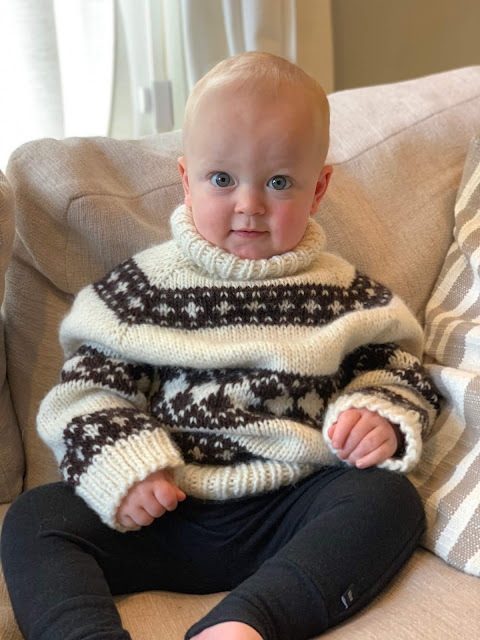 Project completed, mission accomplished, and moving on. A family tradition continues, even if I never knit another one of these. To be honest, I don't really plan to. But I'm so glad I took my friend's words to heart when she told me of something difficult she had managed to do without really knowing how. She said, "I didn't know I couldn't." Now there's a quote to hang on the wall.

When I have a lot to do, I seem to get more done, in less time, if I slow down a little bit. It's kind of like thrashing around in the water vs. relaxing and going with the current. It's been that kind of week for me. I'm here by myself for a few more days, and I've had a steady stream of projects in the works. I've been following my interest wherever it leads, jumping from one thing to the next, wandering back, finishing, starting, finishing another. I'm really enjoying this organic flow of creativity. Here's what I've finished in the past week... None of these are big projects, and the seat cushion was almost finished, so I only had to put it together. I did start another one this week, and it's almost finished, but not quite, so it didn't make the photo. The little bags are something I've circled back to many times over the years. I just love making them every so often. The little bottles are dressed up with some cu
Read more